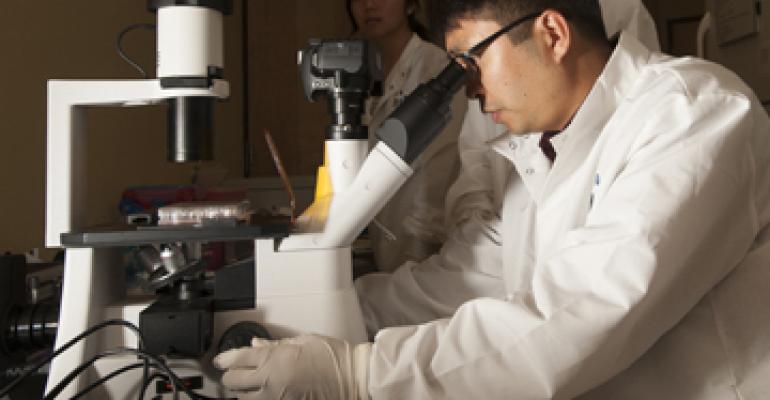 The carbohydrate-based polymer supports and guides the growth of new bone and is resorbed and replaced with the patients’ own bone during the healing process.

Biotechnology startup Molecular Matrix Inc. has received 510(k) FDA clearance for a carbohydrate-based polymer that can help injured bones heal and regrow, reports the University of California, Davis, on its website.

Osteo-P is a synthetic bone graft substitute that supports and guides the growth of new bone and is resorbed and replaced with the patients’ own bone during the healing process. Charles Lee, the founder of Molecular Matrix and also an assistant adjunct professor in the Department of Cell Biology and Human Anatomy at the UC Davis School of Medicine, expects to bring the biomaterial to market within the next couple of months. “What began as an idea from UC Davis has reached all the way to FDA clearance,” Lee told Lisa Howard, who reported on the achievement on the UC Davis news page.

The bone graft substitute is a non-mineralized, synthetic bone void filler made of a hyper-cross-linked carbohydrate polymer (HCCP). It is highly porous, biocompatible, biodegradable and has shown exceptional capabilities of bone repair, according to a press release from the company.

Based on proprietary research, Osteo-P is intended for the filling of bone defects created surgically or through traumatic injury. When placed or gently packed into bone voids, Osteo-P supports and guides the ingrowth of new bone across the graft site, after which it is resorbed and replaced by newly formed bone during the healing process.

Bringing this product to market is the culmination of Lee’s years-long fascination with stem cells, which began when he was an undergrad at the UC Davis School of Medicine. “I fell in love with those cells,” Lee told Howard. “That’s how I got into stem cell biology. There was nothing else I wanted to do than study and research them.”

The stem cells he worked with were grown in a single layer, but Lee began thinking about new ways to grow them.

“Stem cells behave much differently when they are grown in an aggregate as opposed to a monolayer,” he said. “But building up stem cells is not easy. It requires a scaffold—a matrix or structure—to help support the cells to grow into an organoid.”

Lee specifically wanted to use a carbohydrate, a sugar, for scaffolding that would be degradable and nontoxic. The breakthrough came with the invention of a hyper-cross-linked carbohydrate polymer technology that provides a platform for stem cells to grow both in vitro and in vivo. By extreme cross-linking of the molecules, the structure is able to hold its shape under heat and pressure, Lee explained. He founded Molecular Matrix, with significant support from UC Davis through its technology commercialization program, in 2011.

“The need for bone substitute products is expected to expand,” Jim Keefer, COO of Molecular Matrix, told UC Davis. “The global bone graft and substitutes market was estimated at $2.1 billion in 2013 and is expected to grow to $2.7 billion by 2020.”

The Osteo-P biomaterial is expected to be available in the form of large pore granules, sheets, cubes, wedges and cylinders or in custom sizes starting in March 2018.