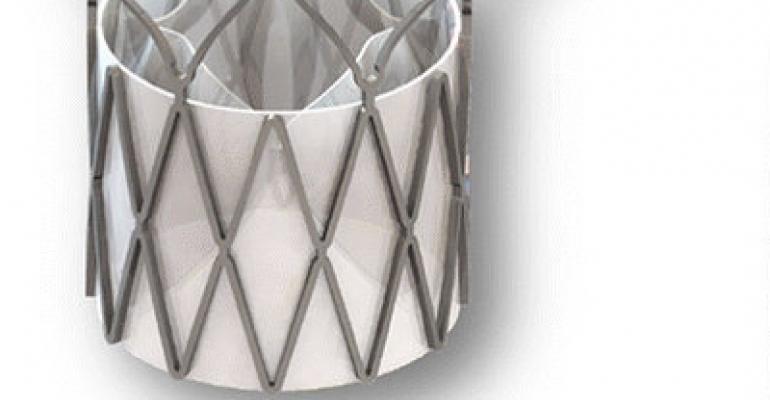 The polymer implants currently undergoing lab tests are expected to overcome problems associated with the long-term use of animal-tissue-based valves and reduce the need for open-heart surgery.

Defective aortic heart valves typically can be replaced with a mechanical  or animal-tissue-based valve. Both options have drawbacks: In most cases, patients with a mechanical valve will need to take blood thinners for the rest of their lives to prevent blood clots, while tissue valves have a limited lifespan, requiring younger patients to undergo replacement surgery. Polymer-based heart valve replacements currently being tested may offer a better alternative.

Calcium build up on the aortic valve, caused by calcific aortic valve disease, can lead to heart failure, notes the National Institute of Biomedical Imaging and Bioengineering (NIBIB), part of the National Institutes of Health. The condition affects more than 2.5 million people over the age of 75 in the United States. For many years, the valves have been replaced through open-heart surgery. Increasingly, older patients who cannot tolerate surgery have been treated with a minimally invasive procedure, transcatheter aortic valve replacement (TAVR), in which a new valve compressed into a catheter is guided through a blood vessel and expanded on top of the diseased valve.

Minimally invasive surgery dramatically reduces recovery time—TAVR patients typically function normally within a few days whereas recovery from open-heart surgery can take several months. However, the increasing use of TAVR in younger patients raises the issue of the implant’s longevity, according to NIBIB: Longer term studies of TAVR procedures have identified potential degeneration and leakage problems with tissue-based valves.

NIBIB researchers, led by Danny Bluestein, PhD, Professor of Biomedical Engineering at Stony Brook University, NY, have designed and laboratory tested an experimental polymer TAVR valve. The group hopes that the use of polymers will overcome some of the problems associated with long-term use of tissue valves, improving the procedure and outcomes so that TAVR can be reliably offered to more patients of all ages, reducing the need for open-heart surgery.

One of the key advantages of working with polymers, unlike tissues, is the ability to change their shapes and properties, said Bluestein in a news release published by the NIBIB. “We are able to test the valves in the early stages of development using computer models and with mechanical devices that mimic the heart pumping blood through the valve,” said Bluestein. “Our test systems and computer simulations allow us to evaluate a polymer valve and identify specific structural issues affecting performance. Then, we can make the necessary changes, for example in the shape, flexibility or other aspects of the polymer that would mitigate problems and increase efficiency.”

The prototype valve was developed in a collaboration between Stony Brook University and Polynova Cardiovascular Inc. (Stony Brook, NY). The valve is a TAVR version of a Polynova polymeric valve designed for surgical aortic valve replacement. (Polynova’s stated ambition is to be “the first company to commercialize safe and effective polymeric prosthetic heart valves.”) Researchers made the valve by compression molding. The ability to make valves with molds would allow for mass production and reduce costs compared to animal-tissue valves, said the news release.

A series of tests was conducted comparing the experimental Polynova valve with animal tissue–based valves currently used in TAVR and open-heart surgery procedures.

In hydrodynamic tests, evaluating blood flow, the experimental device outperformed the other two valves in a first baseline test. A second test using a 3D-printed, patient-specific model of an aorta resulted in a draw, with insignificant differences among the valves in terms of performance. The final test measured the activation of platelets, which can cause blood clots as they flow through each valve. The clotting tests indicated that the polymer valve was the least likely to activate platelets, according to the researchers.

“We believe these initial tests of the polymer TAVR are quite promising, as performance was similar and often better than the tissue valves in this hemodynamic study,” said Bluestein. The group is currently testing other aspects of the valve including durability, stability during and following compression into the catheter, and susceptibility to the buildup of calcium deposits, which is the main cause of aortic valve disease.

The work was published in the January 2019 issue of the Annals of Biomedical Engineering.