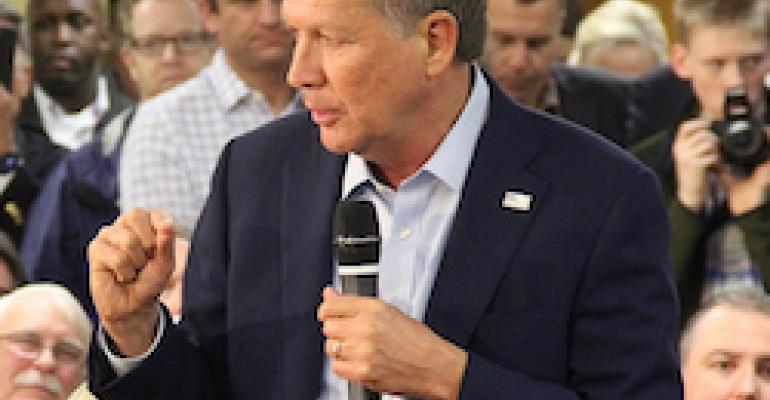 It was hard for John Kasich to get a word in edgewise at last night's Republican presidential candidate debate—what with the Rubio-Cruz tag team going up against Trump—but my ears did perk up when he mentioned medical devices. Now there's a topic you rarely, if ever, hear mentioned in these debates, and it came up a couple of times, most tellingly when Trump, in an uncharacteristically civil manner, questioned Kasich's assertions about making Ohio's economy a shining beacon for the nation during his tenure as governor.

The exchange went as follows (as transcribed by the Washington Post):

Trump: I just want to say—and I'm a big fan of the governor—but they also struck oil, OK, so that helped a lot.

Kasich: OK, let me—let me—let me just talk about that, because I know that—that Donald believes the energy industry is important. So do I. But of the over 400,000 jobs that we've created in the state, we think maybe 15,000 are connected to this industry, because it's early stage.

See, what we've done in Ohio, and what a president needs to do, is to have a cabinet and a whole operation that's jobs-friendly. We have diversified our economy.

We—we do have energy, we have medical devices, we have financial services, we have I.T., we just got Amazon—their cloud computing in the Midwest. You know why it's happening? Because we've balanced budgets, we're strong, we're job-friendly, we don't raise their taxes, and if we have a president that does that in America, we will get the economic growth, and that is what this country needs. Jobs, jobs and jobs, period. 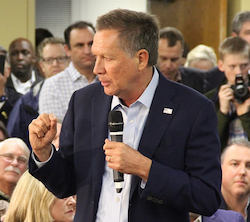 Kasich has made that point repeatedly in his stump speech and in various interviews during the campaign. And, in a bold departure from the prevailing narrative of this election year, it's actually fact based.

Cleveland was named one of the top 10 U.S. cities for medtech innovation by sister brand Qmed last year. The city is "home to the respected Cleveland Clinic, which has had a number of device-related spinoffs, not to mention Case Western Reserve University," writes Qmed, adding that many of the biggest device companies in the country, including Johnson & Johnson, GE Healthcare, Philips Medical Systems, Siemens and Steris have facilities in the area.

In 2015, Cleveland's healthcare industry attracted $201 million in funding from investors, with medical device makers and pharmaceutical companies leading the pack, according to BioEnterprise, a Cleveland-based business group that supports healthcare and bioscience initiatives. The city finished third in the Midwest, behind leader Minneapolis and Chicago.

Notable medtech deals made last year in the city include the following, as reported by the Plain Dealer:

Cleveland laid the groundwork for this transition back in 2010, when it established the Health-Tech Corridor to attract high-tech and biotech companies. A three-mile stretch between downtown and University Circle, which was described by the Plain Dealer at the time as a "downtrodden, gap-toothed stretch" of street, has blossomed into a "hub of innovation," according to BioEnterprise, which is a member of the public-private partnership behind the corridor. More than 130 high-tech companies are located there and it is poised to have the world's first commercial 100-gigabit fiber network. The technology will enable sharing of medical imaging data in milliseconds and accelerate the pace of R&D by providing instantaneous access to massive data sets, according to information from the Health-Tech Corridor.

Further cementing the region's emergence as an advanced manufacturing hub, UBM, which organizes the Medical Design & Manufacturing and PLASTEC events in the United States and produces PlasticsToday, has announced that it will launch the Advanced Manufacturing Conference & Expo in Cleveland next year. The event will highlight broad-based design, automation, packaging and quality control, as well as medical device manufacturing and plastics processing, at the Cleveland Convention Center on March 29 and 30, 2017. For further information, check out the video embedded below or contact [email protected].

So, way to go, Ohio, and, unlike Chrissie Hynde, I say that without a trace of irony. As for Kasich, well, none of this will change the dynamics of the presidential race. It would take nothing short of divine intervention for him to end up being the last man standing in this brawl. When he does bow out, though, he can hold his head high as having run a dignified, fact-based campaign. This year, it seems, the country just is not in the mood for that sort of thing.