It took seven years of design changes and considerable effort in material sourcing to develop a line of swim fins for amputees, but Amp Fins LLC (Danforth, ME) is now ready to bring this unique product to market. The company claims that the design is an improvement over the Rocket Fins used by Navy SEALs, and part of the credit, it adds, goes to compounder S&E Specialty Polymers LLC (Lunenburg, MA), which contributed its materials expertise to the project. 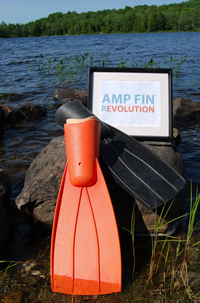 The initial mold for the prosthetic was designed by Randy Lord, an amputee of 22 years who sorely missed swimming at the beach, one of his passions. His determination resulted in he and his wife, Lori, filing for a patent in 2013 and, after overcoming countless manufacturing rip currents, planning for a commercial launch of the Amp Fin in Q4 2015.

One of the main challenges during product development involved finding a material in a durometer that was soft enough to prevent chafing but sufficiently firm to make a strong push in the water and stand on itself without deforming. The Lords consulted with their undisclosed molder, who recommended S&E Specialty Polymers.

After making a few modifications during the molding trials, S&E developed a TPR/SEBS-based material, TufPrene 4005C-80A, which had the appropriate memory and rigidity to maintain its shape but was soft enough to ensure user comfort. In addition, the compound is neutrally buoyant, heat resistant and is available in numerous colors, according to S&E. The design allows for a 100% power stroke in both directions. In fact, according to both companies, the Amp Fin improves on nature, as it allows the amputee to swim more efficiently and effectively than someone with both limbs intact.

Amp Fin LLC initially developed the product for veterans and victims of trauma, and it has partnered with Warriors in the Workplace and is staffed entirely by veterans. While prosthetics can be very expensive, as a product that was developed by and for veterans, Amp Fins LLC says that it is committed to price control and the widest availability possible for the fin. Additional supporters of the project include Maine Veteran Affairs, Warrior Legacy, Veterans Adaptive Sports Training (VAST) and Paul LePage, Governor of Maine.

"As a company, S&E Specialty Polymers has always prided itself in its commitment to its employees and to their community," said Duane Shooltz, President, in a prepared statement. "However, Amp Fins is not just a worthy cause to support. We believe it's also a phenomenal product. When you combine a good cause with a good product, it's really a win-win for everybody," Shooltz added.

"I really believe that we have assembled the best team possible," said Amp Fins LLC President Lori Lord. "We have a group of companies that are not only at the forefront of their respective industries, but are also deeply committed to this product for conscientious and moral reasons. When a group of highly competent people get together who are committed to a meaningful cause, that's a real recipe for success."