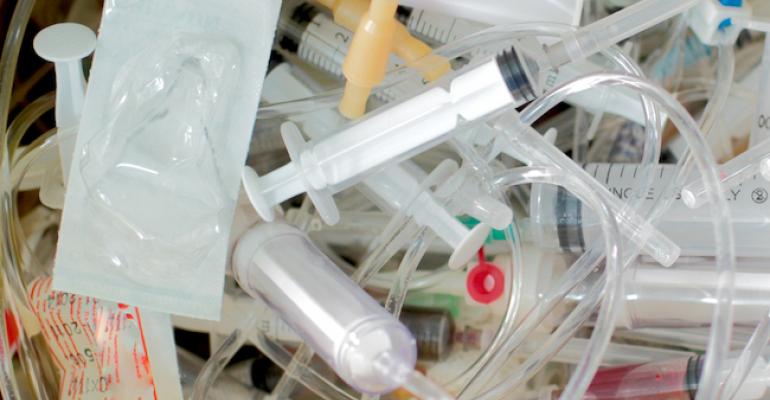 An article in National Geographic asks if medical care can exist without plastics. “Unlike refusing a straw at a restaurant, it’s difficult to cut down on plastic while strapped unconscious to an operating table,” writes Sarah Gibbens. Would you even want to, though?

The juggernaut to remove single-use plastics from our lives largely has spared the medical sector. There are good reasons for that, starting with improved safety for the patient because single-use devices reduce the risk of infection. Also, injection molded and extruded plastic devices allow for design innovation and lower cost compared with metal devices. An article in National Geographic gives another, rather odd, reason why the medical space has been relatively immune to the anti-plastics crusade: “Unlike refusing a straw at a restaurant, it’s difficult to cut down on plastic while strapped unconscious to an operating table,” writes Sarah Gibbens. Maybe I’m just not environmentally woke enough, but that is the not the first—or second or third—thought that would cross my mind under those circumstances, even if I were conscious.

PlasticsToday has reported on past initiatives to recycle medical plastics in hospital settings, principally involving packaging and other items that were not exposed to patients or contamination. The outcomes generally were problematic. One article that comes to mind recounted a project spearheaded by the Plastics Industry Association and the Healthcare Plastics Recycling Council in 2017, which concluded that properly sorting recyclables in intense hospital environments was “fraught with difficulty and that the economic value was not sufficient in the current climate.”

Gibbens’ article cites a nonprofit organization called Practice Greenhealth, which estimates that 25% of the waste generated by a hospital is plastic. “A study on a single hysterectomy found that the procedure can produce up to 20 pounds of waste, most of which is plastic,” she writes, based on data from the American Chemical Society.

In a survey of 332 hospitals mentioned by Gibbens that has not yet been published, Practice Greenhealth looked at “common single-use plastic items in operating rooms that had been successfully replaced by reusable items. Tools like surgical basins and sterilization wraps could be reused and would reduce waste by several tonnes per year. Depending on where they cut back, hospitals could also save thousands of dollars a year,” said Practice Greenhealth, as reported by National Geographic.

Speaking with Gibbens, Gary Cohen, President of both Practice Greenhealth and Health Care Without Harm, makes the point that concern over the spread of HIV is responsible for the industrywide push for single-use packaging in the healthcare space. "It was one of the drivers that helped to fuel the use of single-use devices and excessive packaging in the healthcare sector because there was such deep concern of the spread," says Cohen of paranoia during the AIDS crisis. “It was an overreaction.” That’s an interesting observation that, I must say, is new to me.

I don’t want to give the impression that Gibbens’ article is one-sided—she interviewed Kim Holmes, Vice President of Sustainability at the Plastics Industry Association, and doesn’t simply parrot talking points put forward by activist organizations. And, she's right that sustainability doesn’t have to stop at the hospital admission desk. In fact, the Plastics Industry Association agrees.

According to the World Health Organization, about 85% of hospital waste is noninfectious, the bulk of which is recyclable. Only a fraction of that waste enters the recycling stream—most of it is landfilled or burned, and some haulers are reluctant to take medical materials, writes the Plastics Industry Association in its recently published Watching: Plastics’ Contributions to Healthcare. More can be done and the Cleveland Clinic, for one, is pointing a way forward: In 2017, it recycled 33% of its waste, 194 tons of plastic, reports the association.

There are also some entrepreneurs who are inserting sustainability into the development of medical devices and packaging. Gibbens cites two sibling dentists, David and James Stoddard, who created a pouch of tightly woven fabric to house their sterilized dental tools. The EnviroPouch reportedly is more effective than its plastic counterpart because it forms a thicker barrier around sharp tools. Each pouch eliminates roughly 200 single-use plastic pouches.

Earlier this year, PlasticsToday reported on NewGen Surgical, a medical device company that seeks to “embed sustainability throughout the healthcare continuum,” according to founder and President Rob Chase. “There is a growing need in the industry for products that offer performance, clinical efficacy and economic value, but with the added benefit of being environmentally more sustainable,” Chase told PlasticsToday. His company, thus far, has developed a skin stapler made with 69% plant-based material that results in a 67% reduction in energy used during the production process and eliminates more than 500 pounds of plastic waste for every 10,000 skin staplers used, according to the company. NewGen Surgical also has developed a sustainable needle counter box, eliminating 93% of the plastic waste associated with a product used in nearly every operating room procedure.

There is certainly a case to be made for being more environmentally sensitive in the medical space by recycling single-use plastic devices and eliminating unnecessary packaging, as long as those initiatives don’t adversely impact safety. Likewise, building sustainability into device design should be applauded. But it’s also worth remembering that plastics have improved the safety and efficacy of medical products in countless ways, and they continue to do so.

“Can medical care exist without plastic?,” asks the headline to Gibbens’ article. I suppose it could, but you might not like what that looks like. Ever watched The Knick?