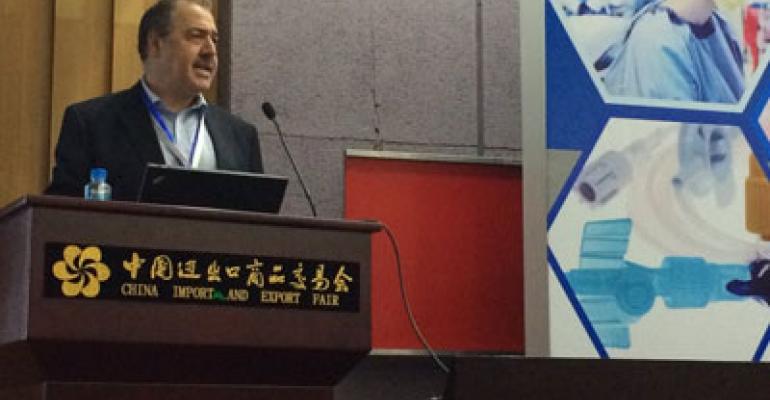 Although it is a young company in one sense, Trinseo (Berwyn, PA) is not a newcomer to the medical market—it has been supplying materials to medical device OEMs for many years. Recently, however, it strengthened its commitment to that market, as was evidenced by the announcement at the beginning of the year that it had achieved ISO 13485 certification for its global facilities. There’s a back story to all of this, along with a forward-looking strategy, which Tony Samurkas, Global Director for Research & Development, shared with PlasticsToday.

It all begins with Dow Chemical, which combined the technologies and capabilities of four business units—polycarbonate and compounds and blends, paper and carpet latex, synthetic rubber and styrenics—into a separate division in 2009. The new Styron division was sold to Bain Capital Partners, the investment firm co-founded by Mitt Romney, in 2010. The company changed its name to Trinseo, “so no one mistakes the company as just the world's largest supplier of styrenics,” PlasticsToday reported back in 2011. In 2014, the company completed its initial public offering (IPO) on the New York Stock Exchange, and and it has been fully independent since 2016. Business is good, says Samurkas—“the stock has tripled since the IPO”—and a more focused approach to the medical device market is a key part in maintaining that momentum.

“Under our previous ownership, we took care of our key customers, but [medical] was not a top priority,” said Samurkas. “Now, it is an area of key focus for our future.”

The medical division of the company is part of the Performance Plastics business, which has two umbrellas, explains Samurkas: Automotive and consumer essentials, which encompasses medical, consumer electronics and electrical and lighting.

“Medical is a high priority, which is why we made the effort to get ISO 13485 certification for our facilities in the United States, Germany and Taiwan,” explains Samurkas. ISO 13485 specifies requirements for a quality management system that supports medical devices, and it is increasingly required by medical device OEMs. As Timothy Reis, Vice President, Healthcare Business Development, at GW Plastics (Bethel, VT) told me during an interview back in 2015, "ISO 13485 is the biggest precursor for entering the medical . . . market. The standard dictates a consistent, methodical approach. I don't see how you can expect to be taken seriously without it."

One of Trinseo’s advantages as a supplier to medical device manufacturers, according to Samurkas, is its size. “We’re big enough that we have a lot of resources globally—we take pride in having some Fortune 50 customers—but our mindset is really in being the little guy. We have a flat organizational structure and can work very fast in developing new compounds, particularly because of our expertise in consumer electronics, where customers ask for color matches, for example, in a matter of days,” explains Samurkas. In fact, the company’s experience in consumer electronics is paying dividends in its medical device applications, he adds. The device manufacturer’s branding and colors have to look great in the hospital not just when the product is launched, but 10 to 15 years from now. Aesthetics are even more critical in homeware products, adds Samurkas. “Customers don’t want something that looks institutional or clunky sitting in their living rooms.”

Trinseo also is focused on developing materials that withstand the harsh chemicals that are used in hospitals to clean medical equipment and prevent healthcare-associated infections among patients. “Polycarbonate is not effective in those applications,” says Samurkas, “and we have developed grades of materials that achieve chemical and ignition resistance with good color stability.”

Trinseo sees a bright future for the medical industry, especially in China and other parts of Asia. “As people become more affluent in that part of the world, they will want the same standard of care and convenience that people in North America and Europe take for granted. Yes, the cost pressures are there, but that’s nothing new to us,” says Samurkas. “We continue to innovate with customers to find more effective solutions.”

Samurkas sees other opportunities, as well, within an industry that is risk averse and, historically, has been reluctant to try new approaches. “With the pressure on for cost containment and the battle to fight off competition, we are seeing customers willing to take on smart risks and try something new with suppliers that inspire confidence. If you’re a supplier customers trust because you’re an incumbent in one area, they are more likely to trust you to do something new because they know your history. They want to go faster, and we’re good at keeping up,” says Samurkas.