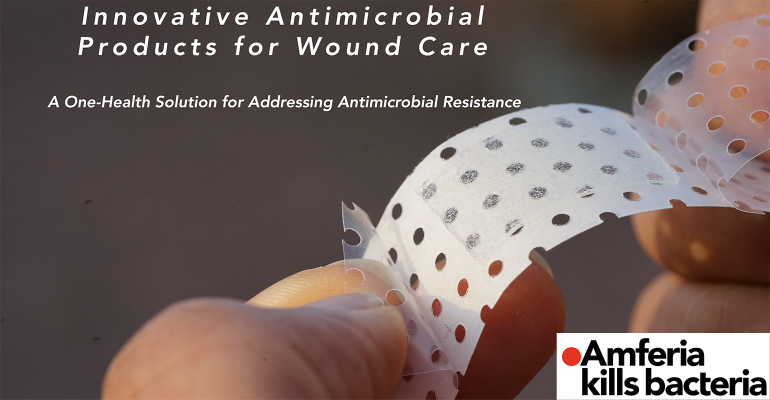 The antimicrobial hydrogel rapidly kills all types of bacteria, including antimicrobial-resistant types, without harming the body. The technology will be applied to wound-care products for human and animal use.

Swedish medical device startup Amferia AB has been granted a foundational patent by the US Patent and Trademark Office (USPTO) for an antimicrobial material based on an amphiphilic antimicrobial hydrogel. The company said it is now in the final development stage for wound-care applications and aims to launch the first product within the animal health sector during 2022.

The company’s US patent 11235021 concerns the primary invention behind Amferia’s platform technology, an amphiphilic antimicrobial hydrogel material that can rapidly bind and kill all types of bacteria, including antimicrobial-resistant bacteria, without harming the body. A covalent, or permanent, bond between antimicrobial peptides and an amphiphilic hydrogel — i.e., containing both hydrophilic and hydrophobic components — enables the formation of a solid material that exerts a strong antibacterial effect on direct contact with bacteria, without leaching any antimicrobials into the surrounding environment.

What makes Amferia’s technology unique, according to CEO Anand Kumar Rajasekharan, is the speed of the antimicrobial effect on direct contact, the broad spectrum of antimicrobial activity, and its targeted action without toxicity concerns, all of which is achieved without releasing any antimicrobials into the environment. “The material itself is inspired from antimicrobial peptides, a part of the innate immune system, that selectively eradicate bacteria,” Rajasekharan explained to PlasticsToday. Amferia’s innovation utilizes covalent binding between nano-structured amphiphilic hydrogels and antimicrobial peptides. They form a “singular amphiphilic hydrogel material that binds and kills bacteria. The material and its properties are supported by strong scientific and clinical evidence,” added Rajasekharan.

Antimicrobial peptides are powerful molecules with a net positive charge that can rapidly and selectively kill bacteria — including antimicrobial resistant bacteria — by physically disrupting the bacteria membrane, Rajasekharan went on to say. This makes them attractive and sustainable alternatives to current antimicrobials over the long-term, he added. “However, the use of antimicrobial peptides has been difficult in clinical [applications] due to their low stability when used in wounds,” said Rajasekharan. Amferia’s patented technology enables long-term stability and clinical efficacy. “This innovation allows for a scalable and clinically relevant design of a medical device, such as a solid antimicrobial wound dressing that rapidly kills bacteria on contact without harming the body’s cells, and potentially helping prevent infections,” according to Rajasekharan.

With the patent in hand, Rajasekharan and his team are pursuing FDA 510(k) clearance by mid-2023. CE marking is also on the agenda. Amferia is currently preparing to launch wound-care products for animal health applications in Sweden. It is exploring avenues to introduce its technology to other EU markets as well as the United States, including via partnerships. Interested parties should contact Amferia.

Amferia was founded in 2018 as a spinoff from the Applied Chemistry Dept. at Chalmers University of Technology in Gothenburg, Sweden.