Wearables Market Has Banner Year, and then Came COVID-19 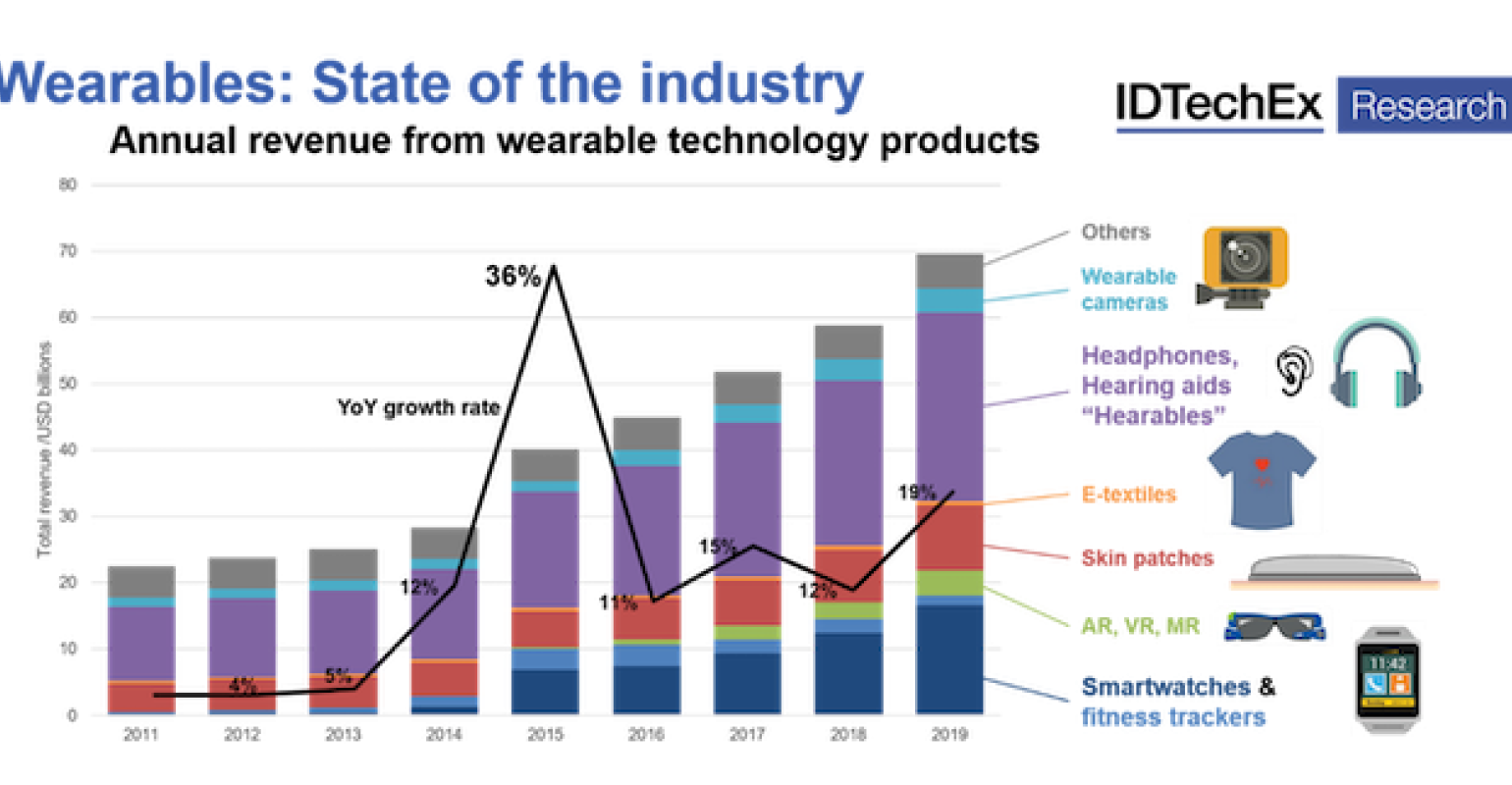 In 2019, the wearables market reported the largest single-year growth in revenue since 2015, when such high-profile devices as the Apple Watch were launched, according to IDTechEx. Much of the market took a severe hit in the first quarter of 2020, but there are some bright spots.

In 2019, the wearables market reported the largest single-year growth in revenue since 2015, when such high-profile devices as the Apple Watch were launched, according to IDTechEx. The sector grew 19% in 2019 to reach a total value of $70 billion, said the market research firm. The story for this year is still being written, but IDTechEx reports that it has updated its entire wearable technology market research portfolio in light of the COVID-19 pandemic, which has affected the sector in varying ways, and not always negatively. The organization recently shared some of its findings with the media.

The true wireless headphones product sector generated the most growth in 2019, producing more than $4 billion in new revenue compared with 2018. Smartwatches were a close second at just under $4 billion, but medical wearables also contributed to the market's healthy performance.

Continuous glucose monitoring (CGM) devices grew by $1.3 billion relative to 2018 values, said IDTechEx. There also has been significant growth in wearable devices for cardiovascular monitoring, and particularly around extended-wear Holter monitors and mobile cardiac telemetry devices, James Hayward, Principal Technology Analyst at IDTechEx, told PlasticsToday. These are growing in their own right and displacing previous wearable options such as traditional Holter monitors and cardiac event monitors, he added. “Another large sector is hearing aids, which has been growing consistently over the last decade. Beyond that, there are smaller pockets of devices seeking to create new markets for medical wearables around things such as remote patient monitoring, clinical trial data collection, and [other] more widespread population health ambitions,” added Hayward.

The wearables market has not been immune to the impact of COVID-19, with sales of some product categories plummeting 80% in Q2 2020 vs. Q2 2019 because of shelter-in-place rules and the closure of non-essential businesses. But the picture is more nuanced when it comes to medical wearables, which can play a vital role in a pandemic.

“Immediate positive impacts have been seen in certain products that can be used in active pandemic countermeasures, such as patches for remote patient monitoring,” said Hayward. “This is generally spread across many relatively isolated case studies but there has been a significant overall increase in sales for these products. The most common have been just focusing on fever monitoring via a temperature sensor, but others include cardiac, respiratory, or motion metrics alongside temperature for a wider picture,” said Hayward.

The reluctance of patients to go to doctor’s offices and clinics during the pandemic has helped telemedicine gain some traction (after many years of falling short of its potential), and that supports the business model of many medical wearables, noted Hayward. “The easier a device is to use and the more insight that can be gained from the data captured, the more likely it is that these remote monitoring systems are here to stay. Trends in telehealth, remote patient monitoring, and wearables all have significant overlap, and this is likely to help with progress in the short to medium term,” Hayward told PlasticsToday.

The rise of “potentially medical” products — consumer wearables that integrate sensing capabilities traditionally associated with medical devices — is a “significant trend that should not be ignored,” according to IDTechEx. It has published a report highlighting the increasing prevalence of medical sensing metrics deployed in traditional consumer wearable products: Smartwatches with ECG capabilities for atrial fibrillation, PPG for oxygen saturation and blood pressure monitoring. In hearables, optical blood pressure is now commonly discussed, joining other more familiar features such as fall detection, core body temperature monitoring, and other relevant medical metrics.

The critical point here, stressed IDTechEx, is that these metrics are not exclusive to medical devices. In many cases, these features are added to standard consumer offerings. When this development is paired with intensive lobbying, as well as significant parallel development of the data infrastructure and supporting systems required for medical devices, it is clear that the longer-term strategy will move in this direction, according to IDTechEx.

Another long-term technological trend that bears watching is the development of multi-parametric systems. These are the norm in primary care settings, but they are typically offered by wired bedside devices or, alternately, multiple devices, each of which feeda single metric into an overall system, explained Hayward. “The majority of wearable — and ‘ambulatory’ — devices still focus on a single metric, but multi-parametric offerings are gradually starting to overcome the significant regulatory barriers to enable a more straightforward approach to multi-parametric remote patient monitoring,” he added. This will be a gradual process, stretching out over years and decades, according to IDTechEx.

Currently, the most common examples of such devices focus around the equivalent of vital sign monitoring, Hayward told PlasticsToday. “That would be typical in a hospital ward, but applied via a wireless device — usually a patch — that can be worn over a period of time, either in a hospital or beyond.” In addition to performing usually two- or three-lead ECGs, the devices may monitor respiration, motion/orientation, and temperature. “All of this technology is available today, but the main challenges are in navigating the additional regulatory barriers: Single parametric devices have extensive historic approval but multi-parametric options often need de novo approval and must achieve system integration with other products and the wider healthcare system,” said Hayward. However, added IDTechEx, as digital health and artificial intelligence features increasingly are introduced, multi-parametric systems will become the norm.