What a Difference Materials Science Can Make

A prominent diagnostics device company received emergency use authorization for its COVID-19 rapid test device. The device offered several enhancements over competing COVID-19 testing kits, as it required only 22 minutes to gain results, and was more accurate than most rapid tests.

Promisingly, the new kit also is less expensive than most tests in use, partly because its procedure involved results generated right at testing centers – eliminating the need to send test kits to an external laboratory. This makes the new kit an attractive option for on-site pharmacy or other healthcare testing centers in less developed countries, who often can’t afford the types of test kits used in the United States, European Union, and other developed nations.

The diagnostic company initially launched the device cartridge with a biaxially oriented polypropylene film (BOPP) material. Unfortunately, the BOPP materials met some – but not all – of the testing device’s needs.

The good, the bad and the unacceptable shelf life

On the plus side, BOPP is crystal clear. This transparency is mission-critical since, upon the cartridge’s insertion, the testing device shines a light through the film into the sample. The success of this process requires exemplary light transmission clarity to prevent auto-fluorescence – a glare-related issue that could diminish the test’s accuracy. The BOPP material provided this necessary clarity well.

The BOPP material’s drawback, however, comes in moisture protection. Ultimately, the testing device’s success would depend upon reliable, long-term protection from moisture, which could adversely affect certain powdered substances in the cartridge.

The key aspect here was longevity. While the BOPP material could be relied upon for 3-6 months of moisture protection, a shelf life of 18-24 months would be required for an instrument designed to be deployed to far-flung regions of the world during an unprecedented and ongoing pandemic.

The company also has goals to utilize the device to diagnose illnesses other than COVID-19. In short, the longer moisture protection could be provided, the better – and certainly six months wasn’t a functional long-term limit.

The diagnostics company planned to produce approximately 10 million of the testing device cartridges per year. While this figure sounds ambitious, it is actually quite small so far as filmed applications are concerned. In addition, the per-cartridge film needs encompassed a tinier area than most solutions incorporating BOPP materials, and the project’s unique application brought the potential to require outsized R&D resources to troubleshoot and problem solve.

Unfortunately, the existing materials vendor simply wasn’t meeting the moment. Considering the initiative’s life-saving scope, the diagnostics device company felt it was not receiving proportionately prioritized service. They needed a partner that would give this invaluable effort the attention it deserved. So, they turned to TekniPlex.

The diagnostics company asked the materials science team at TekniPlex Healthcare if it could design a film that was not only crystal clear (also known as “glass clear”) and free of auto-fluorescence, but also provided the extended shelf life they required. The TekniPlex Healthcare team immediately developed a plan that included samples of suitable starting points – an action-oriented step to begin moving in the right direction.

When the samples were tested, it became evident that the adhesive lamination technologies they employed would not suffice, as the adhesives would auto-fluoresce under light. Armed with this fresh data, the TekniPlex materials science team decided to explore extrusion technologies. Upon considering several of its off-the-shelf samples, the TekniPlex team discerned that a customized film with a special PP layer should be created – one capable of being welded to the cartridges via laser.

The TekniPlex Healthcare team soon designed four varieties of this unique-to-project film, and conducted small-scale runs of each at its dedicated technology center. The team then chose the best-performing substrate for a larger run at its manufacturing facility.

TekniPlex’s selected solution has proven so promising that the diagnostics company is moving toward switching all COVID-19 testing device cartridges to the new, custom-developed substrate. The marquee benefits include a longer product shelf life for a more robust overall testing solution, and an automated cleanroom production process that, by eliminating the need for human contact, keeps the film free of any potential contaminants or smudging issues – such as fingerprints – that could cause light refraction issues during diagnostics.

The final steps include the sort of attention to detail that has ingratiated customers to TekniPlex for decades. For example, TekniPlex is incorporating a special liner film for protection during shipping and pre-production setup. Again, the goal is to keep the film spotlessly glass clear to avoid light refraction issues.

The benefits of this longer-protecting cartridge film are invaluable. Without the extended shelf life, the COVID-19 testing kit would not be a viable option to the vast majority of additional markets for which it is intended. By partnering with TekniPlex, the diagnostics company solved an existential problem that will make its groundbreaking testing solution available to far-flung, often underserved locales around the world. 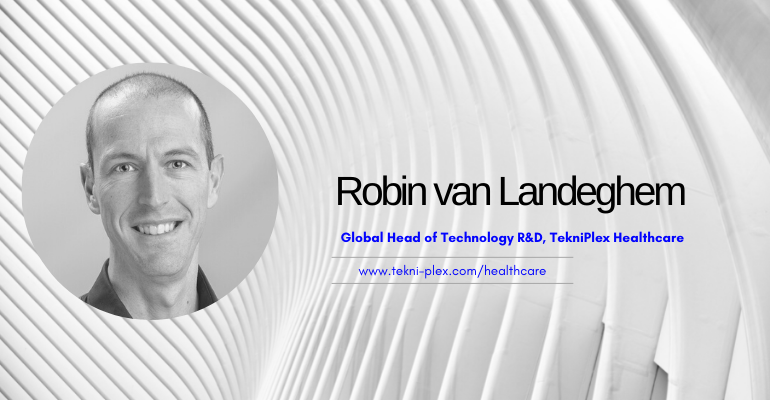 Robin van Landeghem is the global head of technology R&D for TekniPlex Healthcare, which uses advanced materials science expertise and technologies to develop and deliver critical solutions for medical and diagnostic devices, drug-delivery systems, and healthcare packaging applications. With a global reach, the division’s deep understanding of the greater pharmaceuticals and medical landscape helps it produce exemplary barrier properties for drugs and precision medical devices for interventional and therapeutic procedures.