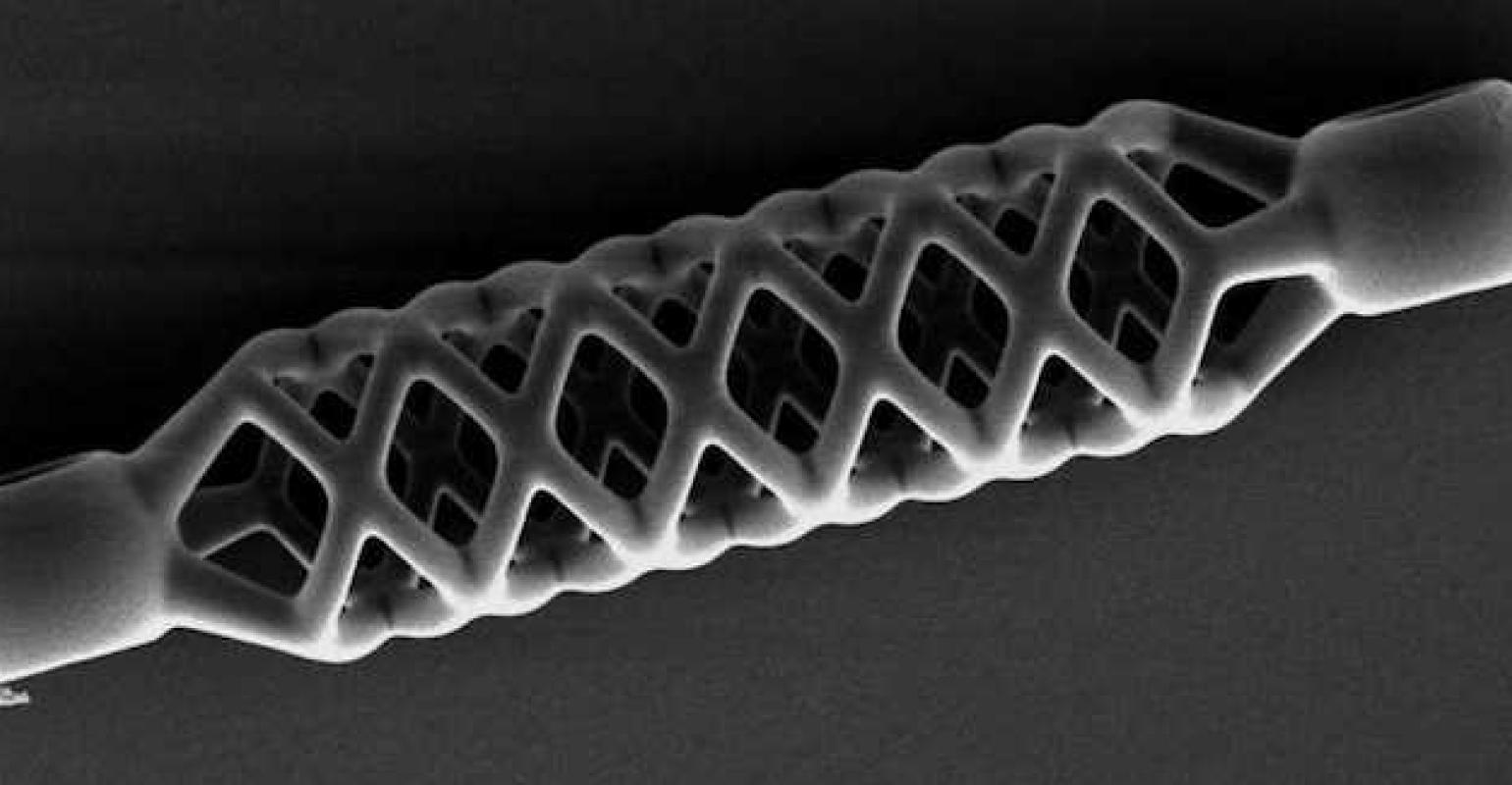 Measuring 50 micrometers wide and 1/2 millimeter in length, the stent made from a shape-memory polymer could be used to widen the urinary tract in a fetus and prevent life-threatening levels of urine from collecting in the bladder.

Researchers have fabricated the world’s smallest stent using a shape-memory polymer, with features that are 40-times smaller than existing stents. The device could be used to widen the urinary tract in a fetus and prevent life-threatening levels of urine from collecting in the bladder. Approximately one in every thousand children reportedly develop a urethral stricture, sometimes while they are still in the womb.

Researchers at the Swiss Federal Institute of Technology (ETH) in Zürich, Italy’s Politecnico di Milano and the Kantonnspital Aarau in Switzerland developed a novel manufacturing technique to produce the stents. Called indirect 4D printing, the process is based on the sacrificial mold principle. Laser-printed high‐resolution micromolds are infused with a polymer and then dissolved with a solvent, revealing the three-dimensional stent.

The stent’s shape-memory properties give it a fourth dimension, explained a press release on the ETH website. “When compressed, the stent can be pushed through the affected area," said Gaston De Bernardis, a pediatric surgeon at the hospital in the Swiss canton of Aarau. "Once in place, it returns to its original shape and widens the constricted area of the urinary tract,” said De Bernardis, who is, in fact, responsible for initiating this research because he was dissatisfied with existing surgical options.

The conventional procedure to prevent urine from collecting in the bladder, potentially threatening the life of a fetus or child, is to surgically remove the affected section of the urethra and sew back together the open ends of the tube. It would be less damaging to the kidneys, however, if a stent could be inserted to widen the constriction while the fetus is still in the womb, noted the ETH press release. While stents are routinely used to treat blocked coronary vessels, they are not small enough to fit into the urinary tract of a fetus. De Bernardis approached researchers at ETH Zürich to see if they could develop a method to produce stents that could sit within extremely narrow channels. The technique they developed for manufacturing these highly detailed structures is described in a recently published paper in Advanced Materials Technologies.

The stents still must undergo testing in animal models, after which human studies can begin. Real-world applications are a long ways off, but the paper's lead author, Carmela De Marco, firmly believes that the research “can open the door to the development of new tools for minimally invasive surgery.”