Your prescription is being 3D printed

TAGS: 3D Printing Materials
We recently reported on the first 3D-printed pharmaceutical to be approved by FDA. A German pharmacist wants to take the potential of that technology further: Mahmudur Rahman, founder and CEO of 3D Printer Drug Machine, has launched an Indiegogo campaign to raise funds to develop an all-encompassing, patient-specific pharmaceutical 3D printer and web-based ordering system.

We recently reported on the first 3D-printed pharmaceutical to be approved by FDA. A German pharmacist wants to take the potential of that technology further: Mahmudur Rahman, founder and CEO of 3D Printer Drug Machine, has launched an Indiegogo campaign to raise funds to develop an all-encompassing, patient-specific pharmaceutical 3D printer and web-based ordering system. 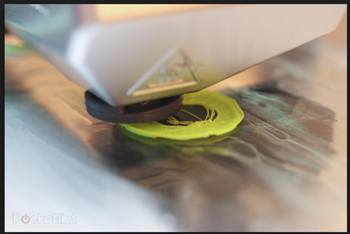 Contributions to the fund-raising effort "will be used to make a unique web application and database where patients order the drug," writes Rahman on the Indiegogo page. Some of the money will go toward research of polymer formulations with the proper drug-release properties, some "will be used in a web-based application where patient data is stored and the rest will be used to make the 3D printer come to light," adds Rahman.

Speaking with 3DPrint.com, Rahman said that he uses a combination of traditional and custom filament for the drug-laced materials. "We modify it to be edible and make it dissolve in a certain time period. We also look at the toxicity of the materials and whether they give any unwanted effects."

According to 3DPrint.com, Rahman's company will make the 3D printers available in kit form at a cost between $150 to $300 and it has plans to sell various forms of 3D-printed drugs. He views the technology as disruptive, capable of changing the world's traditional prescription system and reducing "the domination power of the big pharmaceutical companies." He's right about that, if the project ever sees the light of day.

Even if he finds a way to make all of this work as envisioned, getting regulatory approval in Europe or the United States will be a mammoth undertaking that can take many years and huge sums of money. His indiegogo campaign is a bit wanting in that regard: After seven days, he has raised one euro.

Still, the prospect of 3D printing personalized drugs at doses that match a patient's weight and size, among other factors, is a holy grail of sorts for our brave new world. With FDA approval of Aprecia's 3D-printed drug, it's a certainty that we will be seeing more advances coming down the pike.

As the Washington Post recently reported, citing a Ted Talk by Lee Cronin of the University of Glasgow, the possibility of 3D printing medicines at home is not a chimera. "What's needed," says Cronin, "is a universal set of 'chemical inks' as well as a way to 3D print the lab instruments and these chemical inks at the same time. In essence, this would let 3D printers catalyze the chemical reactions in order to print drugs at the point of need." This would, in turn, disrupt the pharmaceutical industry, which could eventually "witness a transition from pharmaceuticals to algorithms," writes the Washington Post. "Doctors could hand off an algorithm for patients to go print at home on a 3D printer."

Rahman ultimately may not be successful in his endeavor, but he is certainly on the right path. Who wouldn't relish filling a prescription at home rather than waiting in the CVS line?

The video below provides a glimpse of Rahman's 3D printed drug-polymer technology.