From medtech to Trump with one degree of separation

We've come to expect to see Donald Trump dominate the media, but I was still taken aback by the juxtaposition of The Donald and medtech in a headline in sister brand Qmed.com yesterday.

We've come to expect to see Donald Trump dominate the media, but I was still taken aback by the juxtaposition of The Donald and medtech in a headline in sister brand Qmed.com yesterday.

In a story titled, "Why a Medtronic Sales Rep's Murder Matters to Donald Trump," Senior Editor Chris Newmarker reports that the shooting of Medtronic sales rep Kathryn Steinle in San Francisco on July 1 prompted a tweet from Trump. "What about the undocumented immigrant with a record who killed the beautiful young women (in front of her father) in San Fran. Get smart!" he tweeted. The 32-year-old rep died from the gunshot wound two hours after being rushed to San Francisco General Hospital. Francisco Sanchez, who is charged with her murder, is an undocumented worker with a criminal record who has been deported to Mexico multiple times, notes Newmarker.

The incident has become a lightning rod in the debate surrounding so-called sanctuary cities that provide a safe haven for immigrants who have entered the country illegally or overstayed their visas. It was an opportunity that Trump could not pass up, and he used this senseless act of violence to buttress his view that Mexico is sending criminals and rapists to the United States.

Trump's candidacy has been a real nightmare for the Republican party, which finds itself between the proverbial rock and a hard place. It doesn't want to alienate Trump's followers--and they are legion--but cringes at the prospect that it will once again massively lose the Latino vote.

But it's been a godsend for Hillary Clinton and fellow Democrats, of course, not to mention Bill Maher, who gave a silent thanks to God on his Real Time show on HBO when Trump announced that he would seek the Republican nomination for president. 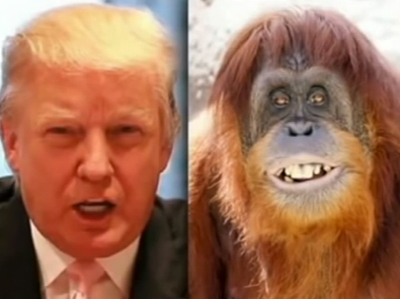 Trump has been a bountiful source of material for Maher, who famously demanded that Trump show a birth certificate as evidence that he was not the spawn of an orangutan. To prove his point, Maher broadcast the picture shown here. This was during the time that Trump became the birther in chief by exhorting President Obama to produce his birth certificate to prove that he was born on U.S. soil. In true Trump fashion, he filed a lawsuit against Maher, which he later withdrew, I assume, because someone explained to him that you can make jokes about public figures.

And the show goes on, as everyone waits with bated breath for the first Republican debate in August, where Trump almost certainly will be one of the 10 candidates making a pitch to voters.

Whatever misgivings the Republican establishment may have about his appearance, they must be secretly delighted about the ratings surge he will bring to a broadcast that, otherwise, would be largely ignored by the viewing public.