Extrusion equipment supplier Ghioldi set up and ran polylactic acid (PLA) bioplastic on a blown-film line at the recent Plastimagen event, looking to capitalize on the local market's interest in biodegradable bags, spurred in part by an on again off again plastic bag ban. "We see a lot of interest in Mexico," explained Filippo Ghioldi. "No one really knows what biodegradable, oxodegradable, etc.

Extrusion equipment supplier Ghioldi set up and ran polylactic acid (PLA) bioplastic on a blown-film line at the recent Plastimagen event, looking to capitalize on the local market's interest in biodegradable bags, spurred in part by an on again off again plastic bag ban. "We see a lot of interest in Mexico," explained Filippo Ghioldi. "No one really knows what biodegradable, oxodegradable, etc. films are so we wanted to have a machine running at the show." 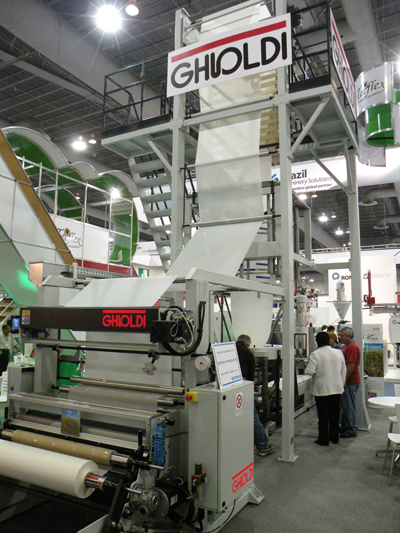 The Ghioldi line processed a Novamont Mater Bi PLA resin in a single-layer blown-film set up. The 65-mm extruder had a machine output of 110 kg/hr through a 200-mm die, producing a 1.2m wide web, which was wound. The system had been sold into the local market and will be the first of its kind in Mexico, according to Ghioldi.

Ghioldi noted that his business has been a long-time collaborator with fellow Italian firm, Novamont, working to optimize that company's material for the extrusion process. Ghioldi has actually supplied several extrusion lines for Novamont's lab.

No trick to extruding PLA

Ghioldi said there is "no particular trick or recipe" to running PLA, with his company's machines starting work on processing the bioplastic 25 years ago by simply modifying a  standard polyethylene (PE) system. In beginning, Ghioldi noted that the quality of material was not as consistent as it is today, which has made successful processing easier. At this point in time, the company uses wooden slats at the nip portion of the system, where in the past water cooling was used. The screw design is slightly different but can still run a low-density PE, and the die has a slightly wider gap, otherwise, it's a conventional blown-film extruder set up.

Three-layer systems can be more complicated, according to Ghioldi, particularly since the glycerin that is often added creates moisture and oil emissions that must be collected in a reservoir that itself must be intermittently drained. Ghioldi has also gone bigger on its systems, supplying what it says is the biggest PLA extrusion system in the world, a 3.2m wide three layer line into Norway with  automatic thickness control. That client has three Ghioldi systems. More recently, the three-layer 2m wide with thickness control that the company displayed at the Plast show in Milan was delivered to a customer in Finland.

Mexico City, which is estimated to use more than 20 million plastic bags per day, had put a ban in place in August 2009, with that initial law having been amended several times since its passage. In November 2010, a solid-waste law established criteria and norms for what it called the sustainable production and consumption of plastic products. This established that the life cycle of plastic bags cannot be greater than 10 years, and that they must use materials that are proven to be renewable and that ultimately biodegrade. The law also determined that plastic bags that utilize additives to accelerate their degradation have to declare the additives and make sure they're accredited the ministry of the environment, that they're compatible with recycling, and that they're non toxic.