The importance of diverting organic waste  - the bulk of all waste that is generated - from landfill is now finally starting to be recognized. Not only is there a heightened awareness of the impact of landfill-generated methane emissions, the realization is growing that organic waste is a resource that can be put to work in a host of beneficial ways. Organic waste management, in short, is suddenly on the agenda, and cities around the world are trying to figure out the best way to approach the problem.

The importance of diverting organic waste  - the bulk of all waste that is generated - from landfill is now finally starting to be recognized. Not only is there a heightened awareness of the impact of landfill-generated methane emissions, the realization is growing that organic waste is a resource that can be put to work in a host of beneficial ways. Organic waste management, in short, is suddenly on the agenda, and cities around the world are trying to figure out the best way to approach the problem.

In Milan, a system introduced in February 2012 is attracting the interest of municipalities from around the world. Why? Because it works. 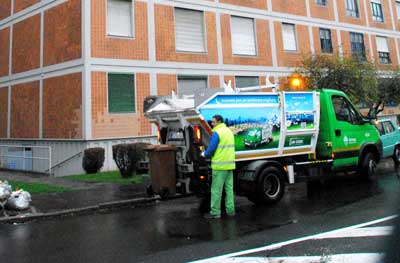 Hence on June 6, 2014, the city organized the Milano Recycle City conference, which was attended by delegates from municipalities ranging from New York, Berlin and Ljubljana to Gothenburg and various municipalities in Holland. Key presentations focused on topics such as best practices in separate collection in large metropolitan areas and the role of residential food waste collections in densely populated areas. Also, a closer look was taken at what Milan was doing right.

Milan has developed an "integrated waste collection and disposal system" to recycle the largest possible portion of material and to produce electricity and heat through the incineration of non-recyclable materials in a waste-to-energy facility. In 2013, around 43% of all trash was collected separately; 0% went to landfill. An important part of this system is the collection of household organic waste through the introduction of a "door to door" commercial bio-waste collection service.

City residents welcomed the implementation of the organic waste collection system, which is being rolled out in four steps, with each step being supported by a public awareness and information campaign. Although the last part of the city  - the northwestern quarter - only adopted the new system this month, the municipality already collects more than twice as much organic waste as any other European city in Europe. An average of 90 kg per person of organic waste is collected annually; a robust contrast to, for example, Vienna (45 kg), or Munich (31 kg) (data for 2012). Moreover, product testing shows that the average contamination level of the organic waste collected in Milan is a very low 4.27%, and so far the quality has been constant over time.

All households received a starter kit containing, among other things, with compostable waste bags and a brown small 10-liter bin. And it is these bags that underpin the efficacy of the Milan model: compostable, impermeable, hygienic, breathable and made of bioplastics which can be processed in anaerobic digestion and composting facilities, they are crucial to the success of the collection system - as well as being essential to ensuring the quality of the final compost.

To ensure the quality of the bags used, bioplastics producer Novamont supported the Milanese project by making an initial free donation to the starter kit of 700,000 bags made from Mater-Bi bioplastic, which is biodegradable and compostable according to international standard EN 13432. When used together with the aerated bin, these bags could be used for the collection of kitchen waste. For each metric ton of organic waste sent for composting, an estimated 94.9 kg of CO2 can be saved.

In a survey taken in February of this year, comments such as "necessary, appropriate, essential and long-awaited," expressed the views of over 60% of Milan's citizens. The new procedures for managing the collection of kitchen waste were not considered onerous; 90% of Milanese respondents said they were fine with the new rules that call for using a separate bin for organic waste, throwing bags into a dedicated communal bin and remembering to buy the special bags needed.

But are they really? Since the launch of the system, maintaining the quality of the bags has presented a problem.

"The inhabitants of Milan, after being provided with 25 Mater-Bi bags free of charge, together with a starter kit, then have to buy special compostable bags which can be found in supermarkets or they reuse the compostable carrier bags used for carrying their shopping and distributed at the cash desks in large supermarket chains" explained Christian Garaffa, Novamont's separate collection marketing manager.

"Currently, most small retailers still use shopping bags which cannot be composted and which thus break the law. Considering that shopping bags represent 50% of combustible bags used for collecting organic waste in Milan, blanket application of the national legislation on shopping bags would make it possible to greatly increase quality of the material collected."

It's ironic, really: the system is in place, the facilities work, the municipality is leading the way and the citizens are willing, even eager to cooperate. All that's needed is a little law enforcement to ensure people use the right bags. Surely that's not too much to ask? Even in Italy?