Mold-Masters is utilizing its E Multi mobile injection unit to empower its new Iris coinjection technology, letting injection molders bring coinjection capabilities to any machine in their shop with a system that actually attaches to the tool itself.

Mold-Masters is utilizing its E Multi mobile injection unit to empower its new Iris coinjection technology, letting injection molders bring coinjection capabilities to any machine in their shop with a system that actually attaches to the tool itself. At NPE, the hot-runner and injection molding technology supplier displayed the innovative concept in two booths, running a 38-mm high-density polyethylene (HDPE) cap with an integrated EVOH barrier, as well as at JSW's booth, molding a PP container with EVOH barrier coinjected from the gate all the way through the containers' lip and foil seal area. 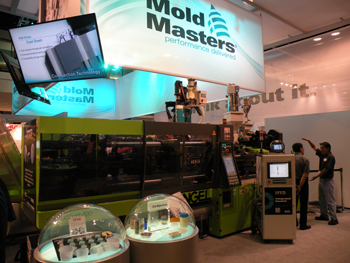 The tool at Mold-Masters booth was running on an Engel e-Motion 200 molding machine with a 16-cavity tool on a five-second cycle. The EVOH and the HDPE inject simultaneously with the valve gates helping control where the barrier material fills, allowing it to follow the HDPE, which forms a skin against the mold cavity that encapsulates the barrier within the cap. This eliminated the need to produce separate barrier inserts, which must then be placed into the cap in a separate step.

At the show, the technology drew interest for applications ranging from packaging, to medical, to consumer goods, where a cheaper regrind could be coinjected into parts to reduce cost, according to Miki Bogar, marketing and communications manager at Mold-Masters.

Mold-Masters' Allan Shantz who spent the last eight months helping develop the technology said that the Iris coinjection technology should be able to operate on tools up to 32 or 48 cavities. The unit at the show had a shot size of 7.7 cu cm, with less than 1 cu cm of EVOH ending up in each cap. The EVOH takes up only 3-5% of the cap based on wall thickness.

Mold-Masters has hundreds of the E Multi injection units in the market, with that technology launching in 2009. Shantz noted that the new Iris system could also be used for two-shot molding and can be mounted to the side of the tool in addition to the top. The cell at the show included a full cap handling, sorting and inspection system from Swiss firm IMD Vista. That system provided 100% barrier detection and inner diameter measurement, with the capability to screen 3000 parts/minute.

At JSW's stand, a 180-ton machine ran the coinjected food container in a two-cavity tool, with the entire system bound for Nypro (read more here).

Bogar told PlasticsToday that his company had more leads generated in the first two days of NPE2012 than in all of NPE2009. In all, Mold-Masters had 12 systems running at the Orlando show, ranging from controllers to hot runners, with various end-market applications including packaging, medical and more.