Most-read articles in the Medical Channel in 2014

What do Harrison Ford, the Philadelphia Eagles, and a medical marijuana inhaler have in common? I know what you're thinking, but you're wrong. What they share, in fact, is that they have been featured in three of the 10 most-read articles in the PlasticsToday Medical Channel this year. The top 10 articles are listed here in ascending order.

What do Harrison Ford, the Philadelphia Eagles, and a medical marijuana inhaler have in common? I know what you're thinking, but you're wrong. What they share, in fact, is that they have been featured in three of the 10 most-read articles in the PlasticsToday Medical Channel this year. The top 10 articles are listed here in ascending order.

10. Tijuana builds a medical manufacturing hub
Mexico has been in the news a lot lately, and not in a good way. When we wrote about a budding medical manufacturing hub in the border city of Tijuana, it may have gone against conventional wisdom. But the facts speak for themselves: More than 40 firms are located in or near Tijuana, and the region is doing a lot of things right to continue to attract inward investment. Mexico, as a whole, is the fifth largest exporter of medical products in the world.

9. That holographic heart in Grey's Anatomy? It's the real deal

An episode of Grey's Anatomy in the spring showed a hologram image of a beating heart floating in space while the real heart was being operated on. The surgeons could tilt, rotate, or otherwise manipulate the holographic image to view features in detail as they performed surgery. This wasn't a screenwriter's invention—the technology exists and could be on the market as soon as next year.

8. How 3D printing is saving lives . . . again
We published a number of articles in 2014 about 3D printing in the medical technology space. One of the areas where 3D printing has had a profound impact is in pediatric devices. In this article, we reported on a doctor and biomedical engineer in Michigan who repaired a child's defective windpipe using 3D-printed splints.

7. Have another hit: Israeli startup develops medical marijuana inhaler
An Israeli entrepreneur has developed a cannabis delivery system that, he says, will make the medical community more amenable to the idea of prescribing marijuana. "Our device positions cannabis on an even playing field with mainstream pharmaceutical drugs," says Perry Davidson, CEO, Syqe Medical. The Syqe Inhaler Exo, designed for clinical use, has undergone clinical trials in Israel. A home-care version is expected in 2015.

6. IBM creates MRSA-killing super plastic from PET bottles
At first blush, it may seem incongruous that a super plastic that destroys methicillin-resistant Staphylococcus aureus (MRSA) should come out of an IBM lab. It starts to make sense when you learn that the discovery came out of IBM-developed polymers that permit microscopic etching on small wafers. The article details how this material evolved into a potential drug-delivery breakthrough.

A first-of-its-kind 3D printer that directly prints silicone has the potential to dramatically expand prosthetics fabrication. Developed by design bureau Fripp Design and Research (Sheffield, UK), the Picsima 3D printer rig had successfully printed a number of samples, when PlasticsToday spoke with company co-founder Steve Roberts in June. Since then, the company has announced the launch of a silicone 3D printing service for 2015.

4. Eagles' offensive guard Herremans gets a (Spyder) grip via SLA, injection molding process
Philadelphia Eagles' offensive guard Todd Herremans is done for the rest of the season as he undergoes surgery on a torn biceps, but when we checked in on him back in October it was all about an exercise aid he invented called the Spyder Grip. The article gave a play-by-play of the design and manufacturing process, which combined stereolithography and injection molding performed by contract design, prototyping, and molding company Eagle Design (Zeeland, MI).

3. Five ways 3D printing is revolutionizing medical technology
It's a testament to the lightning pace of innovation in 3D printing that we have published numerous articles on PlasticsToday since this piece first appeared in April that, in some cases, have even greater potential to usher in medtech breakthroughs. Nevertheless, the technologies featured in this slideshow, from custom 3D-printed exoskeletons to bioprinted functioning human organs, remain hugely impressive.

2. The birth of cool wearable medical devices
Wearable technology is exploding, and while opinions differ on whether consumers will embrace wearable health technology in mass-market numbers, PlasticsToday readers were clearly intrigued by the possibility. In this slideshow, we featured such leading-edge technologies as a bendable material that can be applied to the skin like a Band-Aid to monitor vital signs to an assistive listening device camouflaged as costume jewelry.

1. The inside story on the hands-free crutch that keeps Harrison Ford up and about 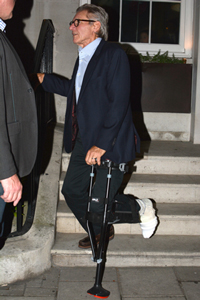 Harrison Ford broke his leg on the set of Star Wars Episode VII earlier this year and was seen, shortly afterward, hobbling around London supported by an odd-looking brace. It was the first time most people had seen the iWalk2.0, a hands-free crutch, and we wanted to know more about this device. PlasticsToday spoke with iWalkFree Inc. (Mansfield, ON, Canada) about the design and manufacture of the product, which has received numerous awards.