NatureWorks updates eco-profile for its Ingeo brand of PLA

NatureWorks has released the first findings of its updated eco-profile for its family of Ingeo biopolymers. These reinforce earlier calculations that the production of Ingeo polymer emits fewer greenhouse gases and consumes less non-renewable energy compared to commonly used plastics such as polystyrene (PS), polyethylene terephthalate (PET) and polycarbonate (PC).

NatureWorks has released the first findings of its updated eco-profile for its family of Ingeo biopolymers. These reinforce earlier calculations that the production of Ingeo polymer emits fewer greenhouse gases and consumes less non-renewable energy compared to commonly used plastics such as polystyrene (PS), polyethylene terephthalate (PET) and polycarbonate (PC).

The eco-profile of a polymer gives information such as the total energy and raw materials consumed, and the total emissions to air, water and soil from the cradle to the finished polymer pellet. An eco-profile is an essential input to any full lifecycle assessment (LCA) conducted on consumer products made from that polymer. NatureWorks works closely with brand owners, manufacturers, universities and other research groups in using lifecycle assessment to compare the impact of various material types on products. 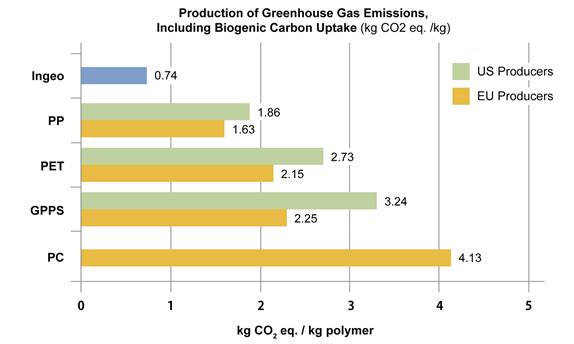 The revised profile is based on the latest version of PE International's GaBi LCA software and database. PE International, one of the world's leading LCA consultants reviewed the methodology used, the final modeling work as well as the use of upstream data by NatureWorks, to determine the 2014 eco-profile and found that the company's LCA process was scientifically and technically valid and consistent with ISO 14040 and 14044 standards for conducting LCAs.

An earlier eco-profile was calculated in 2010 using the methodology, modeling software, and core database in place at the time. "However, LCA tools and databases have progressed in the past four years, and we decided it was time to recalculate the eco-profile based on those advancements," said Erwin Vink, environmental affairs manager of NatureWorks.

"While the Ingeo manufacturing process remains the same, what has changed are the LCA software modeling tools and extensively broadened LCA databases and datasets, which give us the most up-to-date and accurate picture on the greenhouse gas emissions and other commonly used indicators in LCA," he said.

The chart compares the greenhouse gas emissions (including biogenic carbon uptake in the case of Ingeo) for Ingeo manufacture with the emissions resulting from the manufacture of a number of different polymers produced in the US and Europe using the latest available industry assessments for each. The numbers represent the totals for the first part of the life cycle of the polymers, starting with fossil or renewable feedstock production up to and including the final polymerization step.