You might not be able to 3D print your very own cell phone or drone any time soon, but Mike Toutonghi, the founder of Functionalize Inc. (Seattle, WA), has brought the possibility one step closer. His F-Electric 3D-printing filament, which is approximately 1000 times more conductive than anything available today, according to the company, enables 3D printing of products with electrical or mechanical capabilities.

You might not be able to 3D print your very own cell phone or drone any time soon, but Mike Toutonghi, the founder of Functionalize Inc. (Seattle, WA), has brought the possibility one step closer. His F-Electric 3D-printing filament, which is approximately 1000 times more conductive than anything available today, according to the company, enables 3D printing of products with electrical or mechanical capabilities. 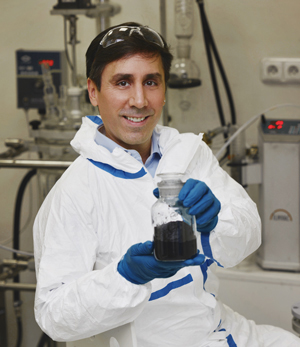 Using the conductive filament, Toutonghi has 3D printed a first-of-its-kind keychain LED flashlight. When I spoke with him, he was jazzed about another project he had just completed—a 3D-printed Arduino light-sensor—as well as a functioning flashlight that another company, Mosaic (Kingston, ON, Canada), had printed using the filament.

"Our team always talked about printing a flashlight," writes Mosaic, a company that has developed a technology that converts conventional 3D printers into multicolor printers. "Imagine: just add a battery, a light source, and it works! With the help of F-Electric's conductive filament, and some caffeine, we did exactly that at 2 AM on Monday morning [Dec. 1]. Printing a flashlight is exciting, but what's even better, is what this signals for the industry," writes Mosaic. Toutonghi couldn't agree more. "There are all sorts of world-first opportunities right now in 3D printing," he told PlasticsToday.

It all began with a school science project. Toutonghi was helping his son build an electromagnetic rocket and 3D printed some of the components. When they got to soldering, progress slowed to a crawl. "I assumed we could buy some printer or filament to let us 3D print the electronics, as well," writes Toutonghi on the company's Kickstarter page. "After searching for some time, I simply found nothing on the market that would let you print circuits." Toutonghi saw an opportunity. He immersed himself in the scientific literature, set up a DIY nanotechnology lab at home, and got to work. Eventually, he developed a formulation and production process that offered functional conductivity in a 3D-printing environment.

"The material is a nanotube-based composite," Toutonghi told PlasticsToday. Graphene, the miracle material, was part of the initial research. "I can't say for sure how much of it is in the final formulation, but it does not provide a huge benefit." The nanocomposite can be formulated with or without metals, adds Toutonghi. "We have developed more-conductive polymers, but the challenge there is developing polymers with sufficient conductivity that can be sold for less than $500/lb," he says.

Although the material is ideally suited for multi-head printers, it is designed to work with single-head printers, says Toutonghi. "It even works with today's 3D printers that use PLA, so you don't need to invest in a new kind of printer," he adds. "Our goal is to allow people to print electronics with the printers they have today."

Functionalize did not achieve its Kickstarter funding goal—a little more than $30,000 were pledged on a goal of $100,000 by the Dec. 10 deadline. Shortly after my conversation with Toutonghi, however, Functionalize announced a manufacturing and cross-licensing partnership with ProtoParadigm (Walla Walla, WA), a manufacturer and developer of 3D printing materials. The partnership allows ProtoParadigm to manufacture and distribute the F-Electric material.

Functionalize is not Toutonghi's first startup rodeo. "I left college to start a 3D CAD software company when it was all about MS-DOS," he says. He has spent 30-plus years in the software business, including a stint as a vice president at Microsoft, but chemistry has been a passion since junior high school, which has served him well in his newest venture.