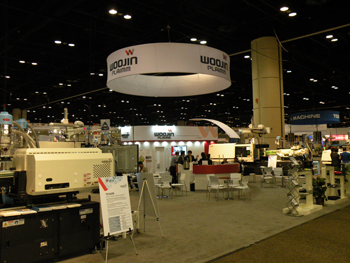 The company brought seven machines with it to Orlando, including three all-electric, three hybrid and one vertical machine, with clamp tonnages on the stand ranging from 55 to 720 tons. All the injection molding presses included HYRobotics and insulation heater covers on the barrels. The company builds molding machines from 30 to 3000 tons.

Founded in Korea in 1985 with a U.S. office since 1999 in Brea, CA, Woojin Plaimm’s Brian Choi told PlasticsToday that his company tallied 2011 sales that put it in a class with fellow Korean molding machine exporters, LG and LS. According to the company’s website, it registered 2009 sales of $60.3 million, with $92.6 million in revenue in 2010.

During the show, the company was able to sell the 390-ton servo injection molding press to Kitty Hawk Molding Co. with the 190-ton and 720-ton machines, as well as some robotics, sold off its stand as well.