I'm so ready for the regular season of football to start. What about you? In case you weren't aware, PlasticsToday's editorial office is based in Denver and, naturally, there's plenty of fanfare and obsession with the Denver Broncos around here. I've had opportunities to attend Broncos games, so it's good to know, before I attend the next game, that the NFL will now enforce a new bag policy.

I'm so ready for the regular season of football to start. What about you? In case you weren't aware, PlasticsToday's editorial office is based in Denver and, naturally, there's plenty of fanfare and obsession with the Denver Broncos around here.

I've had opportunities to attend Broncos games, so it's good to know, before I attend the next game, that the NFL will now enforce a new bag policy.

Calling it "Be Clear on Game Day Safety," this new policy limits the size and type of bags that may be brought into stadiums. The NFL Committee on Stadium Security in May unanimously recommended the implementation of this measure.

Fans can no longer not bring just any type of bags. Beginning with preseason games, fans will be able to carry the following style and size bag, package, or container at stadium plaza areas, stadium gates, or when approaching queue lines of fans awaiting entry into the stadium:

Prohibited items include, but are not limited to: purses larger than a clutch bag, coolers, briefcases, backpacks, fanny packs, cinch bags, seat cushions, luggage of any kind, computer bags and camera bags or any bag larger than the permissible size.

Fans carrying bags that do not meet the criteria will be turned away from the stadium well before they reach the gates.

The NFL said it adopted this new policy to enhance safety inside and outside the stadium and speed the security screening process for all NFL fans. The tragedy at the Boston Marathon was one reason the NFL took this step.

The NFL is the only professional sports league that has a comprehensive set of best practices for stadium security certified by the Department of Homeland Security as anti-terrorism technologies under the United States Safety Act.

"We want our fans to have fun on gameday, and most importantly, we want them to be safe," Broncos President Joe Ellis said. "Our organization fully supports this new NFL policy, and we will work with our fans to implement this essential safety enhancement for Broncos games."

While bans on purses provide frustrations for many, this has provided an opportunity for manufacturers of these types of bags. For instance, Pittsburg-based Little Earth Productions is one of three NFL-approved manufacturers of such bags, according to Trib Total Media.

"We had 70 days notice about the new policy, which is a very tight time frame for designing the bags, getting them 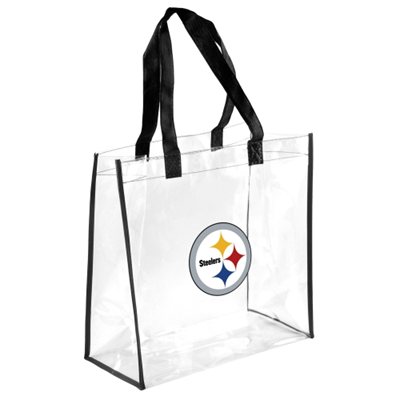 approved by the NFL and having them produced, so it was a definite challenge," said Rob Brandegee, owner of Little Earth Productions in the South Side, in the article.

The company worked with in-house designers to create the 75,000 Steelers logo bags before the first preseason game. The company produces products for women sports fans and handles distribution for Steelers merchandise sold at the stadium and online, including the Terrible Towel.

"I don't think people in Pittsburgh fully understand how hardcore the fans really are," Brandegee said. "We sell merchandise in every major market in the country, but it's nothing like in Pittsburgh. We understood immediately that if fans here were going to have to use a clear bag, it would have to represent the Black and Gold."

An article on the Chicago Business Journal mentioned that the Chicago Bears-branded bag is available for purchase at the Bears online store, as well as a store at Soldier Field. A spokesman for the Chicago Bears told the publication that the "team itself only profits from the plastic bags sold through its team store. But he declined to say how much profit. Or how many bags have been sold."

I guess you could say it does open up a market opportunity for those who make those types of bags. But I'm still going to miss bringing my purse into the stadium.