NPE2015 brings clarity to PVC-free debate in the medical space

The contributions that oft-maligned PVC has made to medical technology will get a well-deserved shout out at NPE2015 in Orlando, FL, in March. SPI: The Plastics Industry Trade Association and the Flexible Vinyl Alliance will showcase a number of medical products made from the material at a special booth in the South hall of the Orange County Convention Center.

The contributions that oft-maligned PVC has made to medical technology will get a well-deserved shout out at NPE2015 in Orlando, FL, in March. SPI: The Plastics Industry Trade Association and the Flexible Vinyl Alliance will showcase a number of medical products made from the material at a special booth in the South hall of the Orange County Convention Center. Meanwhile, exhibitor Teknor Apex (Pawtucket, RI; booth S24055), showcasing a broad portfolio of PVC and thermoplastic elastomers, which have had some success replacing PVC in medical applications, can help attendees source the best material—and it might well be PVC—for a given application.

One of the items on display at the Vinyl Saves Lives booth in the South hall is a portable containment unit similar to those used in Africa to isolate patients and protect medical personnel and the populace from the spread of infectious diseases and to contain pandemics including Ebola and SARS. Personal protective equipment such as garments, masks and shoe covers also will be on display.

The goal of this exhibit, says SPI, is to demonstrate that plastics, and specifically PVC, used in the manufacture of medical products are safe and necessary for appropriate patient care.

It is worth noting that PVC remains the most widely used polymer in medical applications, and is the second most common plastic material in use today, after polyethylene.

Teknor Apex is well positioned to bring clarity and objectivity to the PVC replacement debate. "We have no axe to grind, since we supply PVC as well as thermoplastic elastomers to medical customers," says Ross van Royen, Senior Market Manager for Regulated Products. "The PVC industry has addressed public and health concerns well—plasticizers other than DEHP can be used," he adds. 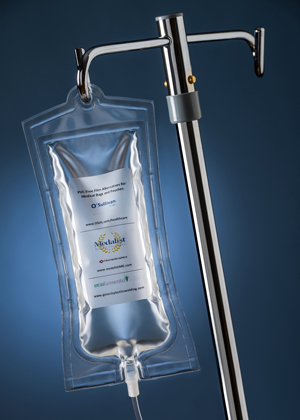 DEHP has been associated with endocrine-disrupting chemicals and was classified as such by the European Union, which will prohibit its use in most applications starting in February 2015. While many medical devices are exempt, it does give EU member states latitude to pass stricter laws: France, for example, has banned the use of DEHP in neonatal and nursing applications effective July 2015.

Beyond the regulatory thickets, "there are marketing advantages to going PVC free," concedes Royen, who adds that "there are more PVC replacement projects under development than have actually been completed. We are very early in a process that takes a considerable amount of time to complete."

"Medical customers are excited about the possibility of replacing DEHP, but no one wants to pay a double-digit premium for it," says Galland. One alternative with some traction is Eastman 168 di-2-ethyl hexyl terephthalate (DOTP), according to Galland. "It's catching on after having struggled for a while. The material has an excellent rodent toxicology profile," he says.

The larger PVC debate playing out in the public space, however, is riddled with absurdity, says Galland. "Fear of a plasticizer is tainting a material that has been used for 50 years in medical applications without causing any harm to humans. Replacing PVC in most applications is not economically feasible," says Galland.

Going DEHP free can be achieved by using other plasticizers, such as DINP, DPHP, and DIDP, "but many of them will be legislated against in the years ahead," says Galland. The smarter route, he adds, is to go phthalate free.

"Ortho phthalates such as DOP, where the alcohol groups attach to two adjacent carbon atoms on the phthalate benzene ring, have poor rodent toxicology profiles . By contrast, terephthalates, such as DOTP, have alcohol groups attached to carbon atoms on the opposite ends of the benzene ring," explains Galland. Consequently, these plasticizers have excellent rodent toxicology.

"It has to do with how each of the two plasticizers hydrolyze in the presence of water and whether the byproducts of hydrolysis are harmful," explains Galland. "Other more expensive non-phthalate alternatives include citrates , adipates , DINCH, and trimellitates."

Of course, if you are in the market for an alternative to PVC, Teknor Apex also will feature its Medalist thermoplastic elastomers at the booth. "There are challenges to using TPEs," acknowledges Royen, "but they can be addressed, especially in new designs." It's a bit trickier engineering a PVC replacement in an existing design, but it's doable, he adds.

As the largest supplier of vinyl, as well as a provider of TPEs, to the medical device industry in North America, Teknor Apex can say, with some authority, that it is an objective partner when it comes to material selection. Simply put, "we are here to serve the needs of the marketplace," says Royen.