When Adam Lowry took a trip to the Hawaiian Islands, it was a real eye-opener.     Lowry, co-founder of Method, a supplier of environmentally conscious household and personal care products, saw firsthand the extent of the marine debris problem—witnessing beaches covered with plastic for as far as the eye could see, Rudi Becker, Method's director of packaging, told PlasticsToday.

When Adam Lowry took a trip to the Hawaiian Islands, it was a real eye-opener.

Lowry, co-founder of Method, a supplier of environmentally conscious household and personal care products, saw firsthand the extent of the marine debris problem—witnessing beaches covered with plastic for as far as the eye could see, Rudi Becker, Method's director of packaging, told PlasticsToday.

Instead of sitting back and conducting business as usual, he suggested a pretty ambitious project: produce packaging made from ocean plastic.

"It was a visit to the Hawaiian Islands by our co-founder, Adam Lowry, that really got the project off the ground," he said. "This project was undertaken because Method wanted to raise awareness of the ocean plastic problem and the importance of using the plastic that's already on the planet."

Becker said the first step involved sending teams of Method employees to the beaches of Oahu to participate in local beach clean ups. Employees flew to Hawaii on donated airline miles pooled together from Method's leadership team. Method employees worked with volunteers from Sustainable Coastlines Hawai'i and the KÅkua Hawai'i Foundation to hand-collect several tons of plastic from the beaches of Hawaii, where the kinds of rigid, opaque plastic needed to make this packaging are most abundant.

From there, the team sorted out the plastic debris and shipped it back to California, he said. Method partnered with recycler Envision Plastics to develop a new recycling process to make the bottles.

The material was hand sorted one more time before being transferred into the PE recycling process. Once the material was sorted, the plastic got chopped up into small flakes and is put through a wash to remove any foreign manner. The clean ocean plastic flake is then transferred to a large extruder where it is blended with HDPE PCR (material from the local MRF) to produce a stable 100% PCR pellet ready for further processing.

The pellets are made into the bottle using a standard blowmolding process. Still, blowmolding this resin presented some challenges. Becker said with some specific design elements on the base of the bottle and optimizing the percentage of ocean plastic in each bottle, they eventually were able to produce a stable bottle.

This process to convert plastic pollution into packaging isn't cheap.

"Before we have even processed anything, the collection of the ocean plastic and transportation add significant costs to the overall price of the resins," Becker said. "While the ocean plastic resin is substantially more expensive on a dollar-per-pound basis, we are willing to pay this price for a project that is driving awareness for a global issue." 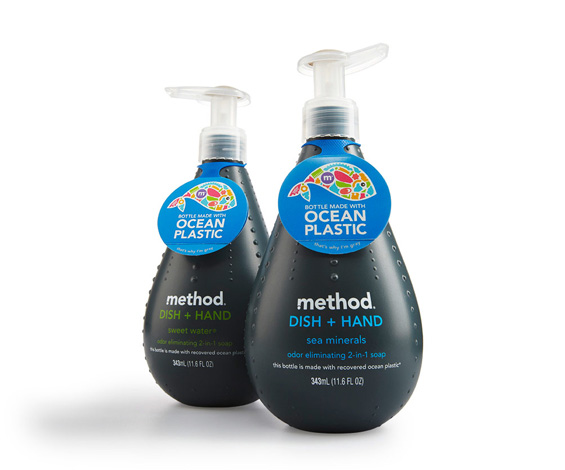 Finally, Method was able to introduce the world to its innovation in sustainable packaging - bottles made from a blend of plastic recovered from the ocean and post-consumer recycled plastic. This limited edition packaging is for a new Method product, a two-in-one hand and dish soap, available exclusively at Whole Foods Market stores nationwide. The company has produced approximately 80,000 bottles for this launch.

Method's intention was to leave the plastic in its natural state, and the gray color is a result of the chopping, washing and blending undergoes during recycling. Inspiration for the package texture was drawn from a sea urchin, with small ridges running the length of the bottle.

It is available in two fragrances - sea minerals and sweet water at the suggested retail price of $4.99.

A portion of the product's proceeds will go to these two Hawaiian organizations as part of Method's efforts to establish an ongoing business model and supply chain for collecting and sorting plastic marine debris.

Method believes there is an opportunity to potentially expand the usage of ocean plastic to the company's other product lines.

"At this time, we are really focused on establishing a sustainable supply chain for the ocean plastic," Becker said. "With this in place, it opens up the potential to expand the program."

Plastics are estimated to represent between 60% and 80% of the total marine debris floating in the world's oceans, according to the EPA. The debris varies from fragments of manufactured plastic products to preproduction plastic pellets that were spilled at some point during shipping or at the factory.

Through this new use of recovered ocean plastic, Method hopes to demonstrate how businesses can tackle environmental problems, and that there are smarter ways to make plastic rather than using virgin material, the company stated. Nearly all of Method's packaging is made from 100% post-consumer recycled material.

"Our goal with ocean plastic packaging is to show that the most viable solution to our plastic pollution problem is using the plastic that's already on the planet," Lowry said in a statement. "Method's ocean plastic bottle demonstrates in the extreme that recycling is possible. By recycling and reusing plastic to make our bottles, we turn off the tap of plastic flowing into our oceans and take the first, most important step toward solving the ocean plastic problem."