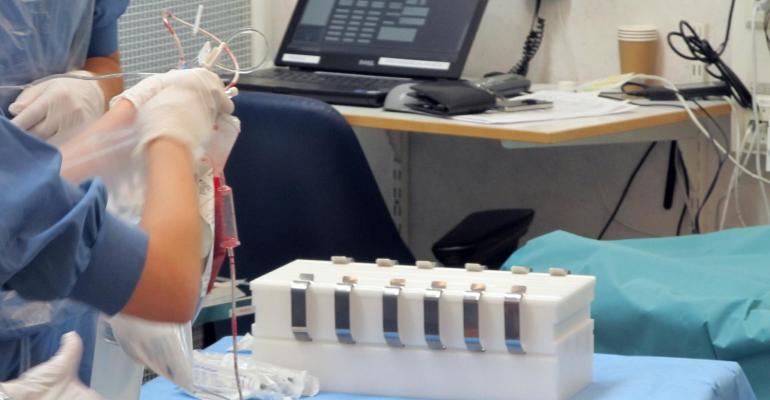 The next big boom area for plastics in the medical market could be regenerative medicine, the production of human organs in a laboratory.

The next big boom area for plastics in the medical market could be regenerative medicine, the production of human organs in a laboratory.

Harvard Bioscience, a leader in the field, estimates that the total revenue opportunity for disposables used in organ transplants is $728 million per year. That's based on an estimated global transplant market of

Until very recently, this concept was in the realm of science fiction. But scientists at leading institutions such as Wake Forest University, Massachusetts General Hospital (MGH), the University of South Carolina and Cornell have been making steady progress growing a person's own stem cells on a synthetic structure, often bioresorbable, using bioreactors. Scaffolds are often made on bioprinters, which print out polymers in three-dimensional forms dictated by a CAD file.

Harvard Bioscience (Holliston, MA) estimates that the number of bioreactors needed for annual production is 26,212 at a unit price of $150,000. The company's forecasts imply that each bioreactor can make five or six human solid organs per year.

Dr. Harald Ott of MGH used a Harvard Apparatus lung bioreactor for the world's first regeneration and transplantation of a lung in a rat. Significant work on development of synthetic lungs has also been taking place at Draper Lab, Case Western Reserve University, and elsewhere.

In an important breakthrough, artificial organs were transplanted into  human patients in Sweden last year.

The tracheas in both procedures were grown in Harvard Bioscience's bioreactors that were produced in its regenerative medicine device business.

The cells were grown on the scaffold inside the bioreactor for two days before transplantation into the patient. Because the cells used to regenerate the trachea were the patient's own, there has been no rejection of the transplant, and the patient is not taking immunosuppressive drugs.

David Green, president of Harvard Bioscience, commented: "We would like to congratulate Dr. Macchiarini and his team for successfully completing the world's second synthetic trachea transplant. This proves that the procedure is not a 'one off' but can be repeated. This is a significant achievement for regenerative medicine."

Harvard Bioscience's strategy in regenerative medicine is to create devices, not discover pharmaceuticals.

The types of devices that require plastics include:

Typically, cell culture for life science research has been performed on flat, tissue culture polystyrene because it is cheap, optically clear, and many cells grow well on it.

Nanofiber Solutions scaffolds are engineered to mimic cellular-scale structures.  Plastics used include polycaprolactone nanofibers averaging less than a micron in diameter.  The fiber dimensions and specific physical properties are optimized to produce ideal synthetic in vitro models.  Nanofiber is an Ohio State University spinoff established in 2009.