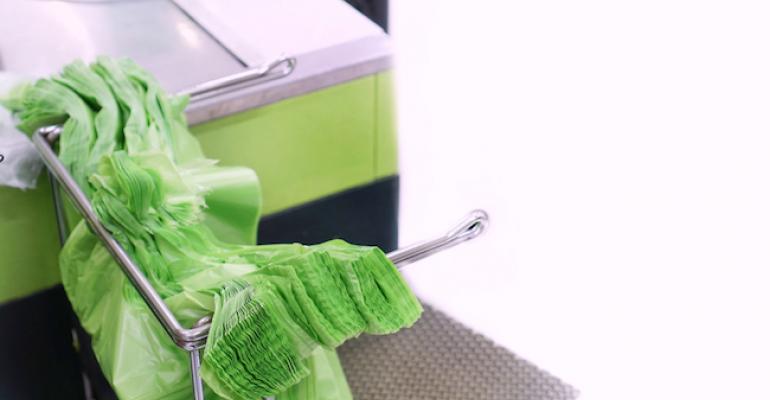 Researchers monitored the degradation of five types of plastic bags widely available from retailers in the UK. After three years, they remained functional as carrier bags, even the so-called biodegradable bags.

Biodegradable bags aren’t so biodegradable after all, according to researchers from the International Litter Research Unit of the University of Plymouth (UK). Professor Richard C. Thompson and Research Fellow Imogen E. Napper examined the degradation of five plastic bag materials widely available from retailers in the UK, according to a release from the University of Plymouth. The bags were left exposed to air, soil and sea environments, which could be encountered if discarded as litter.

The bags were monitored at regular intervals, and deterioration was considered in terms of visible loss in surface area and disintegration as well as more subtle changes in tensile strength, surface texture and chemical structure. It turned out that the biodegradable, oxo-biodegradable and conventional plastic formulations remained functional as carrier bags after being in the soil or marine environments for over three years.

“After three years, I was really amazed that any of the bags could still hold a load of shopping," said Napper. “For a biodegradable bag to be able to do that was the most surprising. When you see something labeled in that way, I think you automatically assume it will degrade more quickly than conventional bags. But, after three years at least, our research shows that might not be the case.”

That raises the question of whether biodegradable formulations can be relied upon to offer a sufficiently advanced rate of degradation [and be a] realistic solution to the problem of plastic litter, said the university’s report.

The compostable bag completely disappeared from an experimental text rig in the marine environment within three months; however, while showing some signs of deterioration, it was still present in soil after 27 months, said the news release.

A response to the report came from European Bioplastics (EUBP), the European association representing the interests of the bioplastics industry and its value chain. “Contrary to what the headlines of some newspaper reports picking up the findings suggest, the study confirms that only certified biodegradable and compostable bags—designed to be collected with bio-waste and organically recycled in dedicated composting plants—even if mistakenly littered in the environment due to bad habits, have a reduced environmental impact,” said François de Pie, Chairman of EUBP. “While no plastic bag should end up in the environment, period, at least it is clear that certified compostable ones will not need decades to degrade, as conventional plastic bags do.”

The five chosen bags included two oxo-degradable bags, one fossil non-biodegradable polyethylene bag, one bag marketed as—but not proven to be—biodegradable, and one product certified compostable according to European Norm 13432, said the EUBP. “Most of the bags selected are not biodegradable according to European Union definitions in the first place. Indeed only one product is—the compostable bag,” said Hasso von Pogrell, Managing Director of EUBP. “But the scenario of industrial composting, for which the item was designed, was not tested.”

According to EUBP, the bag described as biodegradable was allegedly tested according to ISO 14855. This standard describes merely a test method without clear pass/fail criteria that could serve as a basis for proper biodegradability claims and labeling. Therefore, the study actually highlights the importance of correct labeling and certification and reinforces what the EU Commission already did with the Single-use Plastic Directive, where oxo-degradable plastics have been extensively researched by the European Commission and banned.

Professor Richard Thompson, Head of the International Marine Litter Research Unit at the University of Plymouth, said: “This research raises a number of questions about what the public might expect when they see something labeled as biodegradable. We demonstrate here that the materials tested did not present any consistent, reliable and relevant advantage in the context of marine litter. It concerns me that these novel materials also present challenges in recycling. Our study emphasizes the need for standards relating to degradable materials, clearly outlining the appropriate disposal pathway and rates of degradation that can be expected.”

The EUBP expressed concerns about compostable bags and the testing procedures used. “Plastic products certified to be industrially compostable are no solution for littering. Testing them as if they should be is misleading the public’s perception of the technology,” said von Pogrell. “It creates the impression of the product lacking in performance, even though the performance in the intended environment has not been tested at all.”

Certainly, the testing of the various types of plastic retail carrier bags sheds some light on what the terminology actually means when promoted as “oxo-degradable” or “biodegradable” or “compostable.” It lends some doubt as to the credence of these claims. It also heightens the concerns that none of these so-called solutions are truly what they claim and that plastic litter will be with us for millennia because of people who choose to throw all types of waste products into the environment.

"Give up the biodegradability myth," says chemical engineering professor

Several years ago at an SPE thermoforming conference, Ramani Narayan, a chemical engineering professor specializing in polymeric materials from renewable resources and biodegradable polymeric systems at Michigan State University, gave a presentation in which he noted that there are many misleading biodegradability claims in the marketplace—all we have to do is put an additive into the plastics and the material will magically disappear.

“What we need is an end-of-life strategy,” said Narayan, “but all of this biodegradable stuff sounds good. The public loves it! But, I ask, in what environment will this degrade? Define environment. The word ’biodegradable’ means nothing.

“Time?” Narayan asked. Eventually it will biodegrade but when? Is some biodegradability better than nothing? No! There are serious health and environmental issues connected with biodegradability. It’s all or nothing—it must be defined in terms of the environment and time. Recycling and waste-to-energy are the best use of plastics—give up the biodegradability myth.”

It would appear that Professor Narayan is right given this most recent study by the University of Plymouth. I have to agree with him that all the time, effort and money being put into trying to make plastics disappear in the natural environment will be ultimately futile, which is one reason so many organizations are calling for the outright ban of plastics. Waste-to-energy (incineration) solves two problems with one solution: It produces energy in countries that need it and provides a way for the worst ocean polluters to dispose of their waste—plastics and other materials—in a way that is beneficial and captures value.