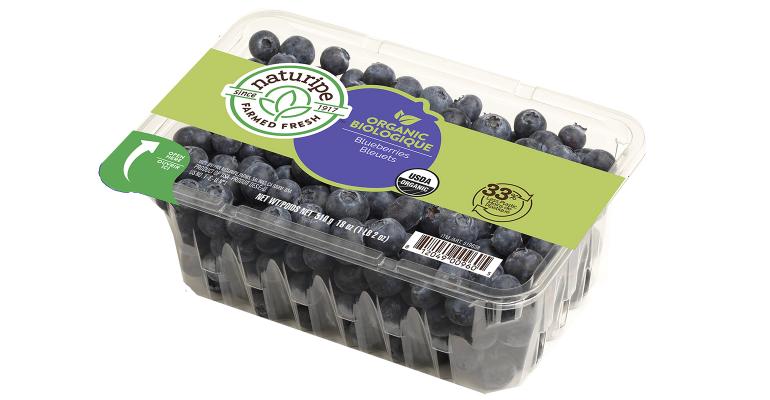 It’s fitting that a company like Naturipe Farms, Salinas, CA, that packages products that are grown is on-trend with other sustainably minded brands. A farmer-owned producer and marketer of premium berries and avocados, Naturipe has been an industry leader for more than 100 years marketing fresh, frozen and value-added products.This year the company is adding the How2Recycle label to packaging to instruct consumers on proper recycling practices and where to find information specific to their municipality.

Naturipe also joined major North American fresh berry producers in setting a goal to use 100% recycle-ready packaging by 2025. It joins others in the industry making this commitment, including the California Strawberry Commission, the North American Blueberry Council (NABC), Asociacion national de Exportadores de Berries (Aneberries, Mexico), and members of the National Berry Crops Initiative, among others.

These are part of an ongoing series of developments that the company traces back to 2014 as an early adopter of breakthrough packaging that replaced clamshell packaging with heat-film-sealed thermoforms.

It was a “berry good” category-changing innovation: Not only was losing the hard plastic lid a huge win for plastic reduction, with per-pack plastic cut by 33%, the thermoforms are made of rPET.

Naturipe uses the heat-seal technology for both fresh and value-added product lines. The latest example of the latter is the June rebranding of Naturipe’s original snacks product line to Boost Bentos, which includes a new line of sweet treats, Bliss Bentos. The modern look and shelf impact of a printed film label is apparent for the line of indulgent, yet healthy snacks.

The biggest win for film-sealed containers is for sustainability. For example, on a single foodservice pack change from clamshells, the packaging removes nearly 550 pounds of plastic weekly from the waste stream.

“These initiatives are progressing steps toward our goal of increasing sustainability from our farms to your tables,” says CarrieAnn Arias, VP of marketing at Naturipe Farms. “We are also committed to educating and encouraging consumers to do their part by recycling clamshells.”

Credited for bringing the heat-seal packaging to the berry category is Janis McIntosh, director of marketing innovation and sustainability. “Naturipe Farms and our family of farmers have made it a priority to reduce the environmental footprint in all areas of the business particularly in packaging reduction and recyclability. Since I joined Naturipe, I’ve made it my priority to focus my efforts on reducing our environmental footprint not just as a company but as an industry.”

“We’ve seen a large increase in heat seal packaging in the berry industry over the last two years,” McIntosh tells PlasticsToday. She responds to the rest of our questions in this Q&A.

What set the project into motion?

McIntosh: In April 2013, Costco Canada approached us about doing a heat seal with our fresh blueberries. While Heat Seal was expanding rapidly in the UK, it was a new concept to the berry industry in the USA.

When was this implemented and what’s the current status?

McIntosh: After a year of development, we packed our first heat-sealed berries in the spring of 2014 at four key growing locations in California, Georgia, Michigan, and British Columbia. One of our biggest challenges initially was sourcing punnets that would work throughout the supply chain.

[Ed Note: Punnets are thermoformed plastic containers with air/drain openings used for berry fruits that we will call thermoforms for simplicity.]

Since this type of package did not exist in the US, we turned to Europe for options. We quickly realized that since Europe uses a slightly smaller pallet footprint for shipping, and all their thermoforms were also smaller. After redesigning boxes and pallet configurations we were able to work through the challenges to launch two sizes that first year. With the learnings from the first year we spent the next 12 months working with our vendors to develop two new thermoforms that would not only fit our US master carton and pallet, it would have the necessary venting needed to perform as well as the clamshell.

We kept the thermoform container the same dimensions as the clamshell so we did not need to reconfigure our shipping masters or our customer’s operations. That also allows us to go back and forth between the two packs as needed.

McIntosh: The largest ongoing challenge was the increased capital needs to purchase machinery.

On top of that, there is the challenge of moving from a traditional blueberry packing line to a much more sophisticated heat-seal line that required proper training. The heat-seal machines require full-time monitoring, regular cleaning, and a technician who understands how to mitigate a problem and make quick adjustments. Machinery wise, heat-seal equipment adds to the required floor space but fits easily into an existing line. Changeovers are easy and fast, depending on the machine manufacturer. The machines are expensive but very reliable when properly maintained. Successful Heat Seal packing requires that the packaging materials be of good quality and consistency.

There were and continue to be several challenges, the largest being the cost of the equipment and the fact that blueberries are seasonal, lasting 8-10 weeks in any given location. For example, we harvest in Florida and California in early spring and by September we are in British Columbia. Heat-seal equipment is not easy to relocate and if you are not using it 24/7 your payback period on the equipment could last years rather than months.

How many lines have been converted?

McIntosh: Initially we had three lines in the US with two machines being moved seasonally. Today we have quadrupled our line capacity with several stationary machines running 7 days a week.

What are the product volumes and growth opportunities for the heat-seal packaging?

McIntosh: The growth of this product over the course of the last two years has been tremendous. We have gone from 2 SKUs in 2014 to 12 fresh commodity SKUs and close to 20 in our Value-Added Fresh line. When you move from a clamshell to a heat-sealed thermoform you reduce the plastic by 50%. The addition of the film layer adds some plastic back giving us a net reduction of 33%.

Regarding payback, we are currently not seeing any. In fact, there are significantly higher costs associated with this process, and as such the cost of packing a Heat Seal thermoform is higher than conventional clamshells.

This is primarily due to the fact that the fresh berry industry is highly seasonal and involves different scattered locations, making it nearly impossible to have one year-round central packing location.

Can you credit the companies involved?

McIntosh: Without the support from tray-sealing machinery supplier ProSeal America, Accolade, MasterPack Spa, Infia, and Penninsula Pack (acquired by Sonoco in 2017), we would never have gotten off the ground in 2014.

Also, we cannot thank the Costco staff enough for their support and patience through the development. Today there are many more packaging choices for companies wanting to get into heat sealing, better film structures, and improved access to thermoforms are helping move the technology forward. It’s tough being the first to develop a product, but heat seal has been a great direction for us and the industry in terms of sustainability.

What’s the specific nature of the film?

McIntosh: We are constantly testing film. Our blueberries ship two high in a case so the film really needs to be strong. On top of that, we require peel and reseal technologies on our larger packs so consumers can open and close their berry pack up to 25 times.

What do you call out on the package label?

McIntosh: Each of our Heat Seal packages carry the How2Recycle label, which clearly conveys to the consumer how to recycle the package. In addition, we also call out the 33% reduction in plastic.

Is this the beginning of the end for the clamshell in these markets?

McIntosh: Clamshells (shown below) are still the standard pack in the industry and are likely to remain so in the near future since attempting to do Heat Seal on a field-packed item such as strawberries is even more complex and would be at a significantly higher cost.

Because of this we are moving to “wash away” labels that can be removed from the container to improve the recyclability of clamshells, making them similar to the film labels on water bottles.

Tells us more about the wash-away label for clamshells.

McIntosh: I went on a mission a couple of years ago to find out why our clamshells were not getting recycled. During my sleuthing, I found a recycling company called rplanetearth that was in the process of finishing a new recycling plant in Vernon, CA.

My boss and I flew to LA and spent the day learning the recycling process and we left with an understanding of why paper labels had to go. We followed up with a tour of our local Material Recovery Facility (MRF) to confirm where are clamshells were really going and decided we had to fix it.

One thing led to another and earlier this year the berry industry came together to announce by 2025 the whole industry would move completely to biaxially-oriented polypropylene (BOPP) wash-away labels.

Were there any unintended consequences?

McIntosh: The expansion of Heat Seal into our Value-Added Fresh as well as foodservice offerings was a positive consequence for Naturipe. On the negative side, the packaging component lead times, particularly with films, can take several weeks rather than days so adjustments to our ordering process were required to avoid added cost of air-freighting materials.

What’s been the feedback?

McIntosh: Our Heat Seal packaging has a great sustainable story. The rPET thermoform has less plastic than the standard clamshell and is recycle friendly. Most retailers have sustainable initiatives around plastic and this fits very well into their plans.

McIntosh: We understand that consumers buy berries with their eyes, so it’s very important that our packaging remain clear. In addition, plastic has not only improved the quality of our berries but has dramatically reduced food waste. In the near future, our recycle-ready packaging will be PET. It’s the number one recycled plastic in the world and with recycling facilities like rplanetearth, who can manage all shapes and sizes, we feel confident our packaging can successfully be part of a closed-loop system.