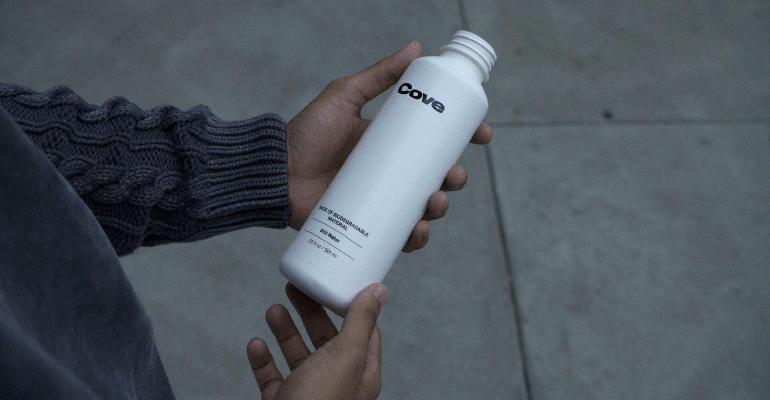 RWDC agrees to supply 350 million pounds of its proprietary PHA over five years to the Los Angeles–based startup, which is developing the first water bottle made entirely of biodegradable material.

The latest announcement from Cove, a Los Angeles–based company founded in 2017 that plans to introduce the first water bottle made entirely of biodegradable material, said that it has entered into an exclusive partnership deal with RWDC Industries. RWDC has agreed to supply, over a five-year period, 350 million pounds of its proprietary PHA made from food waste and post-consumer or used cooking oils at its new 400,000-square-foot plant in Athens, GA.

According to RWDC’s website, $40 million has been invested in the building that will become the global headquarters of RWDC Industries. Singapore will be the regional headquarters for the company’s eventual expansion into Asia. Another $220 million will be invested in Athens on the first “module” that will be producing 5,000 tons of PHA resin by the end of 2020, the company promised. At that point, it added, “construction will begin on the first of four 25,000-ton production lines with the facility reaching full capacity by late 2022.” There has not been an update on whether RWDC reached the goal it announced a year ago.

According to the latest announcement, dated May 12, 2021, Cove’s mission is to end the world’s reliance on plastic. The company’s investors include Valos Equity; Marc Benioff (CEO of Salesforce); James Murdoch (former News Corp. executive); life coach Tony Robbins; and Peter Rahal, entrepreneur and Managing Director of Litani Ventures. Cove’s co-founder and CEO Alex Totterman claims that the company “already has large retail deals in place for its first product launch, the water bottle, later this year.”

Commenting on the new partnership, Totterman said, “We are incredibly excited to partner with Daniel and his team, who have been at the center of PHA over the past two decades.”

Indeed, Carraway’s LinkedIn profile lists him as current CEO of Meridian Inc. (which is now Danimer Scientific) and CEO of Danimer Scientific since April 2004. A graduate of the University of Georgia, Carraway founded RWDC with Wee in 2015. In the six years since the company’s founding, RWDC has raised $168 million in total funding.

RWDC has some big names endorsing the company’s PHA, including Robert Downey Jr., who spoke for the company’s product in a Feb. 22, 2021, article in e27, an online publication in Singapore. Downey Jr. is an investor in RWDC, which announced in the article that it has raised $22 million in “fresh funding,” including funding from Downey Jr.’s FootPrint Coalition. RWDC declined to disclose the exact amount from the US-based coalition of investors that invest in high-growth, sustainability-focused companies.

An October 6, 2020, article in the Los Angeles Times noted that the bottle, bottle cap, label, and adhesive all will be made of biodegradable materials. Totterman told the LA Times that the company brought on board “one of the leading global PHA scientists as our chief science advisor,” who’d been in R&D at Dow Chemical and the “huge traditional polymer companies for the last 20, 30 years. He is “partly retired, but he is still helping us,” said Totterman.

The scientist in question is Jan Ravenstijn, Cove’s Chief Science Advisor. Ravenstijn was introduced in an Aug. 2, 2019, press release as a “leading PHA scientist and veteran R&D executive who has held positions at both Dow Chemical and DSM, and has specialized in bio-based materials for the past 14 years. At the time of the announcement, Ravenstijn was a member of the global expert team on renewable, feedstock-based materials at the nova-Institute and also a member of the scientific advisory board of the Aachen-Maastricht Institute for Biomaterials. He is a co-founder and board member of the global organization for PHA — GO!PHA.

On May 6, 2020, RWDC announced the closing of a $133 million, two-state Series B funding round for PHAs “produced by microbial fermentation of plant-based oils or sugar . . . recognized as the only commercially viable biodegradable bioplastic. Primarily produced from used cooking oil, RWDC’s PHA is certified by TÜV Austria to be fully biodegradable in soil, water, and marine conditions — leaving no toxic residue.” RWDC also announced that it would use the funding to “meet growing demand for PHA, including by expanding the company’s production capacity with a new facility in Athens, GA . . . which will bring 200 new jobs to the community in northeastern Georgia. RWDC will also use the new funds to conduct research and development efforts.” Athens is the home of the University of Georgia.

The LA Times article noted that in 2018 Totterman found a supplier in Athens, GA, for a “type of bio-waste polymer called PHA, or polyhydroxyalkoanoates, in pellet form, which would be melted down to make bottles using Cove’s equipment at a third-party bottler in Montebello, CA.”

Totterman also assured the LA Times that the water used in Cove’s bottles would be “purified alkaline water that’s sustainably sourced. We’re not using spring water. We’re not sourcing in any drought-stricken areas,” he said, adding that Whole Foods is the only retail chain he could reveal that was in negotiations with Cove at the time of the article.

In a March 11, 2019, article in the New Atlas, “Cove launches biodegradable alternative to plastic water bottles,” Totterman announced the Cove water bottle, and said that “all Cove’s manufacturing, filling, and packaging for the California launch [in May 2019], happens in LA. As Cove expands, we will set up multiple manufacturing and packing facilities across the US. This will allow us to localize production and minimize transportation. Cove is not interested in shipping bottled water across oceans and continents.”

An article on Cove’s plans that appeared on Feb. 11, 2019, in Fast Company announced that Cove is “launching later this month.” Totterman told the writer Adele Peters that the company has been working for the “last two years on really providing a direct alternative to the single-use plastic bottle.”

Here we are four years after Cove announced its plans to make water bottles from PHA, and six years after the founding of RWDC Industries. The two companies now have an agreement that RWDC will provide 350 million pounds to Cove to make the water bottles.

In my last conversation with a spokesperson from Cove in January of this year, a blow molder had not yet been contracted to produce the bottles, but I was told it would be a blow molder in California. I’m not sure if the molds have been produced yet; however, there doesn’t seem to be a timeline when RWDC will be scaled up far enough to meet demand.

Another problem that was pointed out to me by an industry person is that of getting enough feedstock — i.e., enough cooking oil and food waste from various restaurants, fast-food eateries, and other sources — to be able to supply 350 million pounds of PHA even over five years.