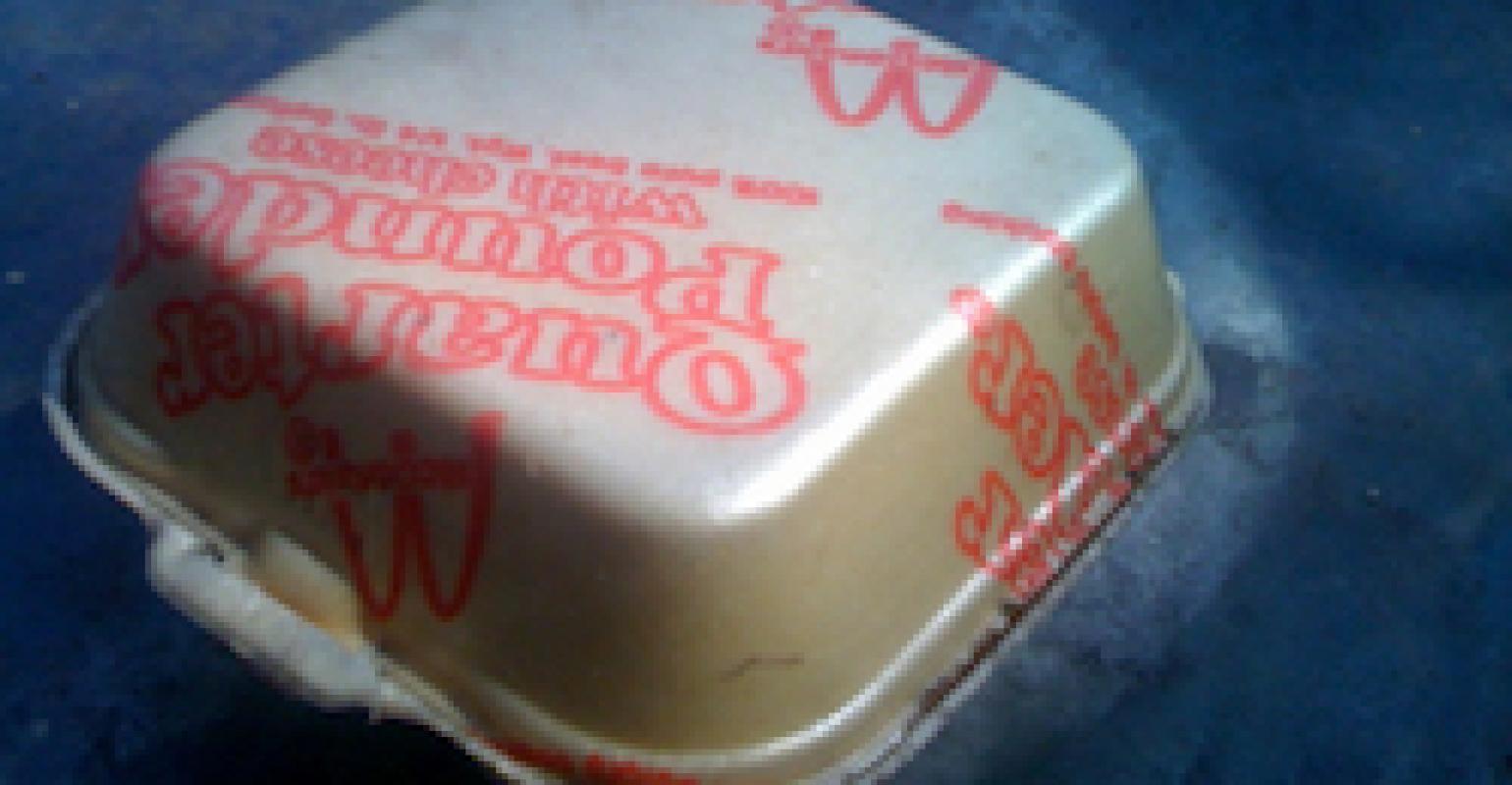 The recent campaign by advocacy group As You Sow pressuring McDonald’s to eliminate the use of polystyrene in its overseas restaurants had a familiar ring to Clare Goldsberry. She consulted her archives and found some interesting historical perspectives.

Every time I see another press release from the advocacy group As You Sow, I’m reminded how long this debate over McDonald’s use of expanded polystyrene foam food containers has been going on. While cleaning out some files, I found Wall Street Journal clippings on this topic dating back to the early 1990s.

One headline read: “McDonald’s to Drop Plastic Foam Boxes in Favor of High-Tech Paper Packaging.” The article, by WSJ writer Scott Kilman, announced that McDonald’s Corp. had decided to phase out EPS foam food containers and replace them with “what is being called a breakthrough in paper packaging technology.”

Kilman writes that this new paper technology “is a blow to the plastics industry, which has been under attack by environmental groups who complain that the industry’s foam containers are difficult to recycle.” While not much was known about this so-called “new paper technology” developed by James River Corp., we do know that it was called Quilt-Rap and claimed to be biodegradable.

“More importantly, James River said the packaging can do almost the same job of retaining a sandwich’s heat and controlling condensation as the [EPS] clam shell container—the characteristics that had long made the polystyrene-based boxes popular with McDonald’s,” said the WSJ article, which quoted McDonald’s USA President Ed Rensi saying, “It is a real breakthrough.”

An unnamed McDonald’s spokesperson said “the company’s overseas franchises will also phase out use of the foam container, but a timetable hasn’t been set.”

The 1991 article noted that McDonald’s was a major buyer of EPS foam food containers, but cited a Dow Chemical spokesperson who said that McDonald’s move “won’t have a noticeable impact on the company’s sales. ‘But we are disappointed in what they have done.'" McDonald’s tried to offset the negatives of using EPS foam food containers by implementing recycling opportunities for the material, but environmental groups weren’t satisfied, and the Massachusetts Public Interest Research Group, the Boston office of Ralph Nader’s lobbying network, had attacked McDonald’s attempts to recycle PS, said the WSJ.

Something that I found interesting in the article was that Robert C. Williams, then President and CEO of James River, said that the paper wrap, which was created specifically for McDonald’s, weighs about a third of a PS container and “takes up less volume.” Where, I wonder. In a landfill? Here’s the real kicker: “The paper wrap can be made with plastic in order to form a barrier, but the product apparently gets its insulating characteristics from the way the material is knit together,” the article said.

Okay, so let’s get this straight: McDonald's was trying to get rid of one type of plastic, EPS foam, and touting this fantastic new “paper” wrap that is made with a barrier layer of plastic film, which means its biodegradability has just been nullified! Oh, but by volume it takes up less room in the landfill! Terrific!!

An article in the February 1, 1991, issue of the WSJ, (“Foam Cups Damage Environment Less Than Paper Cups, Study Says”) by Amal Kumar Naj cited a study of the manufacturing processes between paper cups and EPS cups. The article noted the 1990 announcement from McDonald’s and the fact that the company’s decision to phase out EPS containers had “created a stir when it announced under pressure from environmentalists” that it would switch from plastic to paper.

Martin B. Hocking, author of the study and a chemistry professor at the University of Victoria in British Columbia, said he was careful to be “evenhanded” in his analysis, and contended that "recyclability of paper vs. plastic foam shouldn’t be the sole criterion for selecting one material over another.”

The WSJ article said that Hocking compared the environmental impact of a paper cup with a hot drink container. “Starting with raw materials, he found that the manufacture of both the foam cup and the paper cup require the same amount of petroleum products, about four grams of fuel. In the case of paper, Hocking noted, additional environmental damage occurred form the destruction of forests.

“Hocking said chemical requirements in plastic are lower because the manufacturing process uses a number of catalysts, which prod the process along without themselves being consumed.” The catalysts aren’t released to the environment, and they are innocuous compared with many of the chemicals used in paper, Hocking added.

“The study said the paper cup ‘consumes 12 times as much steam, 36 times as much electricity and twice as much cooling water as a polystyrene foam cup,'" noted the article. Emissions per paper cup are more than two-and-a-half times higher than the plastic foam.”

The article noted that, according to the study, when paper degrades in a moist environment it gives off methane gas, “a gas believed to contribute to global warming. He said the most significant environmentally harmful emission in plastic results from the use of the blowing agent pentane, which [at the time of this WSJ article] contributes to harmful ozone concentrations at low altitudes. But on a per-cup basis, he said, overall harmful emissions from paper almost certainly are greater than from plastic.”

In a recent blog, I referenced a Dart Container Health & Safety paper on the company's website, which noted that pentane and carbon dioxide are both used as blowing agents. “The carbon dioxide used for this technology is recovered from existing commercial and natural sources. As a result, the use of this blowing agent technology does not increase the net levels of CO2 in the atmosphere.”

Another comment about the dangers of EPS foam noted that it is “stable in landfills” and, because of the way landfills are constructed, nothing biodegrades.

Of course, as is to be expected, James River Corp. “took issue” with the study. And a spokeswoman for the American Paper Institute, a trade group, said, “Similar studies have been found to be significantly flawed.”

An interesting side note about EPS comes from a book published in May 1945, The New Plastics. “Foam (aerated) polystyrene, which is a sponge-like form of polystyrene, is now being used in war work. The material is under strict military restrictions and no details are available as this book goes to press.”

Another article in the WSJ that year, “Earth-Friendly Claims for Paper Draw Scrutiny: ‘Degradable’ Claims by Paper Companies Draw FTC Scrutiny,” noted that these claims by various paper manufacturers “may only foster misperceptions about the differences between paper and plastic.”

Obviously, this EPS foam vs. paper in food packaging and paper vs. plastic in carry-out bags is an old debate and one that continues even after nearly three decades of scientific studies proving its safety and benefits. Ultimately, this argument must boil down to science over the hype. Which do you believe?