Global market for bioplastics to grow by 20% 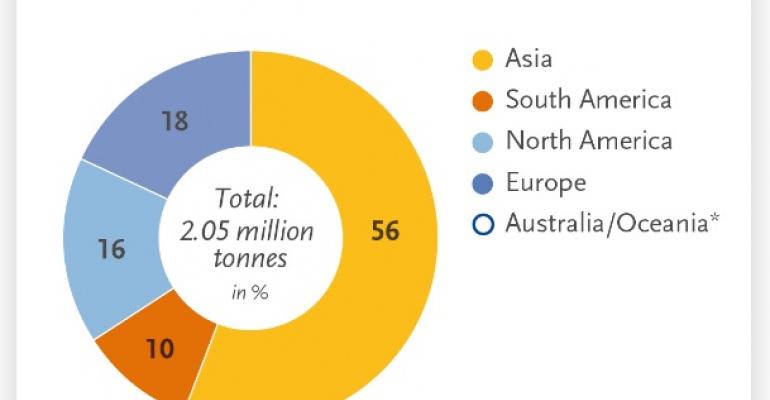 Driven by biopolymers such as PLA and PHAs, packaging remains the largest field of application for bioplastics with almost 60% of the bio-based, biodegradable plastics market. 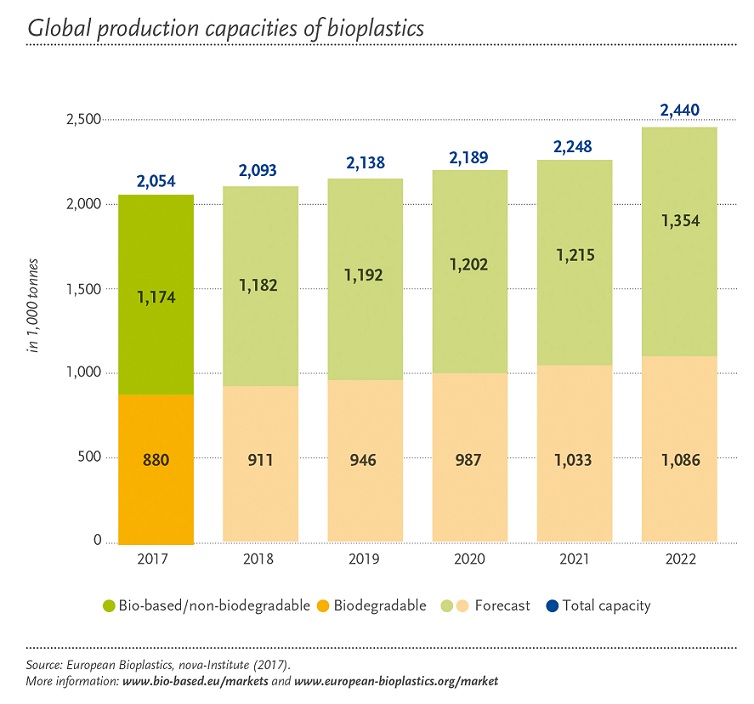 “The global market for bioplastics is predicted to grow by 20% over the next five years,” says François de Bie, Chairman of European Bioplastics. “The transition to a low-carbon and circular economy, stronger policy support for the bioeconomy, and an increased consumer awareness for sustainable products and packaging are driving the expansion”

The global bioplastics production capacity is set to increase from around 2.05 million tonnes/2.26 million tons in 2017 to approximately 2.44 million tonnes/2.69 million tons in 2022. Innovative biopolymers such as PLA (polylactic acid) and PHAs (polyhydroxyalkanoates) are the main drivers of this growth in the field of bio-based, biodegradable plastics. PHAs are an important polymer family that has been in development for a while and that now finally enters the market at commercial scale, with production capacities estimated to triple in the next five years. These polyesters are 100% bio-based, biodegradable, and feature a wide array of physical and mechanical properties depending on their chemical composition. Production capacities of PLA are also predicted to grow by 50% by 2022 compared to 2017. PLA is a very versatile material that features excellent barrier properties and is available in high-performance PLA grades that are an ideal replacement for PS (polystyrene), PP (polypropylene), and ABS (acrylonitrile butadiene styrene) in more demanding applications.

Bio-based, non-biodegradable plastics, including the drop-in solutions bio-based PE (polyethylene) and bio-based PET (polyethylene terephthalate), as well as bio-based PA (polyamides), currently make up for around 56% (1.2 million tonnes/1.32 million tons) of the global bioplastics production capacities. The production of bio-based PE is predicted to continue to grow as new capacities are planned to come online in Europe in the coming years. Intentions to increase production capacities for bio-based PET, however, have not been realised at the rate predicted in previous years. Instead, the focus has shifted to the development of PEF (polyethylene furanoate), a new polymer that is expected to enter the market in 2020. PEF is comparable to PET but 100% bio-based and is said to feature superior barrier and thermal properties, making it an ideal material for the packaging of drinks, food and non-food products. In 2022, bio-based PP is expected to enter the market on a commercial scale with a strong growth potential due to the widespread application of PP in a wide range of sectors.

Packaging at 60% of total market

Packaging remains the largest field of application for bioplastics with almost 60% (1.2 million tonnes/1.32 million tons) of the total bioplastics market in 2017. The data also confirms that bioplastics materials are already being used in many other sectors, including textiles, consumer goods and applications in the automotive and transport sector and the agriculture and horticulture sector. 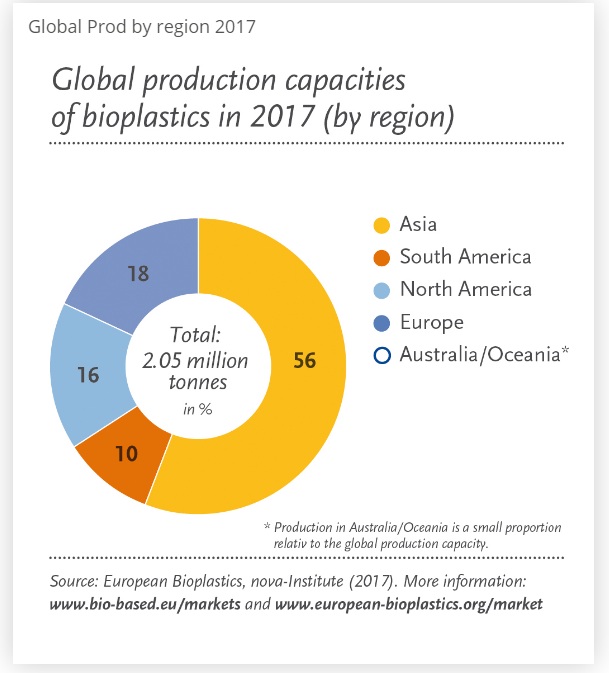 With a view to regional capacity development, Asia remains a major production hub with more than 50% of bioplastics currently being produced there. One fifth of the production capacity is located in Europe. This share is predicted to grow to up to 25% by 2022, with the European Commission’s commitment to the transition to a circular economy model expected to accelerate the momentum of growth and development of the bioplastics industry in Europe.

The land used to grow the renewable feedstock for the production of bioplastics amounted to approximately 0.82 million hectares in 2017, which accounted for less than 0.02% of the global agricultural area of 5 billion hectares, 97% of which were used for pasture, feed and food. Despite the market growth predicted in the next five years, the land use share for bioplastics will remain around 0.02%. This clearly shows that there is no competition between the renewable feedstock for food, feed, and the production of bioplastics.

“Over the past ten years, the bioplastics industry has flourished and developed into a fast-growing innovative sector,” says de Bie. “We are witnessing a growing number of major brands switching from fossil-based to bio-based materials or to offer biodegradable solutions for their products in response to the increased consumer demand for more sustainable products and an overall change in awareness about the impacts of consumption choices on the environment. The bioplastics industry is able to meet the increased demand as a result of substantial investments in research and development by the many innovative small and large companies that concentrate their strengths on the development of bio-based products designed with a circular economy in mind.”

The market data update 2017 has been compiled in cooperation with the research institute nova-Institute (Hürth, Germany). The data for the global production capacities of bioplastics is based on the market study “Bio-based Building Blocks and Polymers” by nova-Institute (2018). For more information on the study and full market data report, visit www.bio-based.eu/markets.

European Bioplastics (EUBP) is the European association representing the interests of the bioplastics industry along the entire value chain. Its members produce, refine, and distribute bioplastics i.e. plastics that are bio-based, biodegradable, or both. More information is available at www.european-bioplastics.org.