IAPD Steps Up to Protect Performance Plastics from Ham-Fisted Legislators 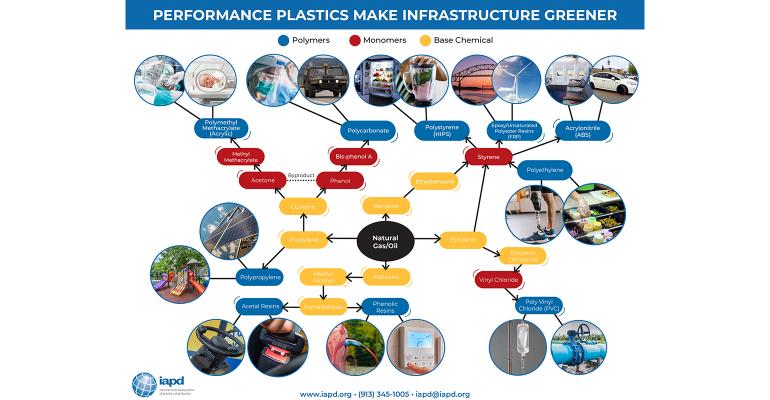 The International Association of Plastics Distribution (IAPD) produced a flow chart showing the progression of monomers to polymers to applications to help educate members of Congress.

The House Energy and Commerce Committee’s CLEAN Future Act, introduced in March of this year, sounds good on its surface. But like all bills, whether drafted by Congress or state legislatures, the devil is in the details. The CLEAN Future Act would strive to achieve net zero greenhouse gas pollution, require retail electricity suppliers to generate 100% of their power from zero-emission resources by 2035, implement transportation electrification through electric vehicles and charging stations nationwide, and much more.

Down toward the bottom of the bill is the waste reduction section, which proposes to “reduce the generation of waste before it can pollute our nation’s air, water, and communities” by imposing new “clean-air permitting requirements on industrial facilities that produce plastic.” Plastic is being targeted because its production is a “significant, growing source of greenhouse gas pollution.” The bill promises to “reform” our country’s “outdated recycling and waste management system to ensure that producers minimize the amount of waste they generate, including by establishing post-consumer recycled content standards for everyday products and instituting a national bottle deposit program.”

Reducing the “generation of waste” indicates that this bill was created by people who believe that all plastic is waste and that plastics processors, who manufacture valuable plastic products — both disposable and durable — are nothing more than waste generators. It goes to follow that this process of waste generation must be curbed through a ban on the expansion of new manufacturing of polymers.

A notice put out by the International Association of Plastics Distribution (IAPD) said, “While the intended target of this language is single-use, consumer-grade plastics, not performance plastics, the view that all plastics are bad is permeating the debate.” IAPD was asked to create a solution to protect performance plastics, which are used to make vehicles, electronics, appliances, aircraft, heavy equipment, water and sewer infrastructure, and more. If the base polymers are capped, they would be unavailable to make millions of products that consumers use every day. The IAPD outlined a total of 26 end markets for performance plastics.

“Unfortunately, we explained that you cannot carve out performance plastics when you are eliminating the DNA that makes up all plastics, regardless of use,” the IAPD said. As a result, the IAPD developed a flow chart (shown above) that demonstrates the progression of monomers to polymers to applications to help educate members of Congress on how a legislative ban on the DNA of performance plastics would devastate the goal of a more resilient semiconductor supply chain, the expansion of electric vehicle and battery manufacturing and infrastructure, and more.

IAPD noted that it took until July 27 for a bipartisan infrastructure package to be announced. It includes “much for IAPD members to celebrate, including massive investments in infrastructure projects suitable for performance plastics. The IAPD Washington team worked to make sure that none of the negative language that had permeated the House versions of the infrastructure bill entered the bipartisan bill. Due to strong relations with senators on both sides of the aisle, the IAPD was able to ensure that “discriminatory language against plastics, like the CLEAN Future Act’s mandate that lead-containing drinking water pipes be replaced only with iron or steel,” did not make it into the final bill.

“While we are awaiting the final legislative language, we are confident that our efforts have been successful and that IAPD member companies will, if the House and Senate pass the [bill], be able to take full advantage of the opportunities it provides for performance plastics,” said the IAPD.

What Washington typically does is throw out the baby with the bath water, so it’s good that IAPD was on hand to make sure this didn’t happen to performance plastics. While people use plastic products every day — from cell phones to toilet seats — they rarely put much thought into the fact that plastic really is fantastic! It’s a valuable material that provides many benefits to people and the planet, far more than alternatives such as steel, iron, glass, or paper. It’s certainly not waste from the outset — it’s only waste when people don't recycle or reuse single-use plastics.