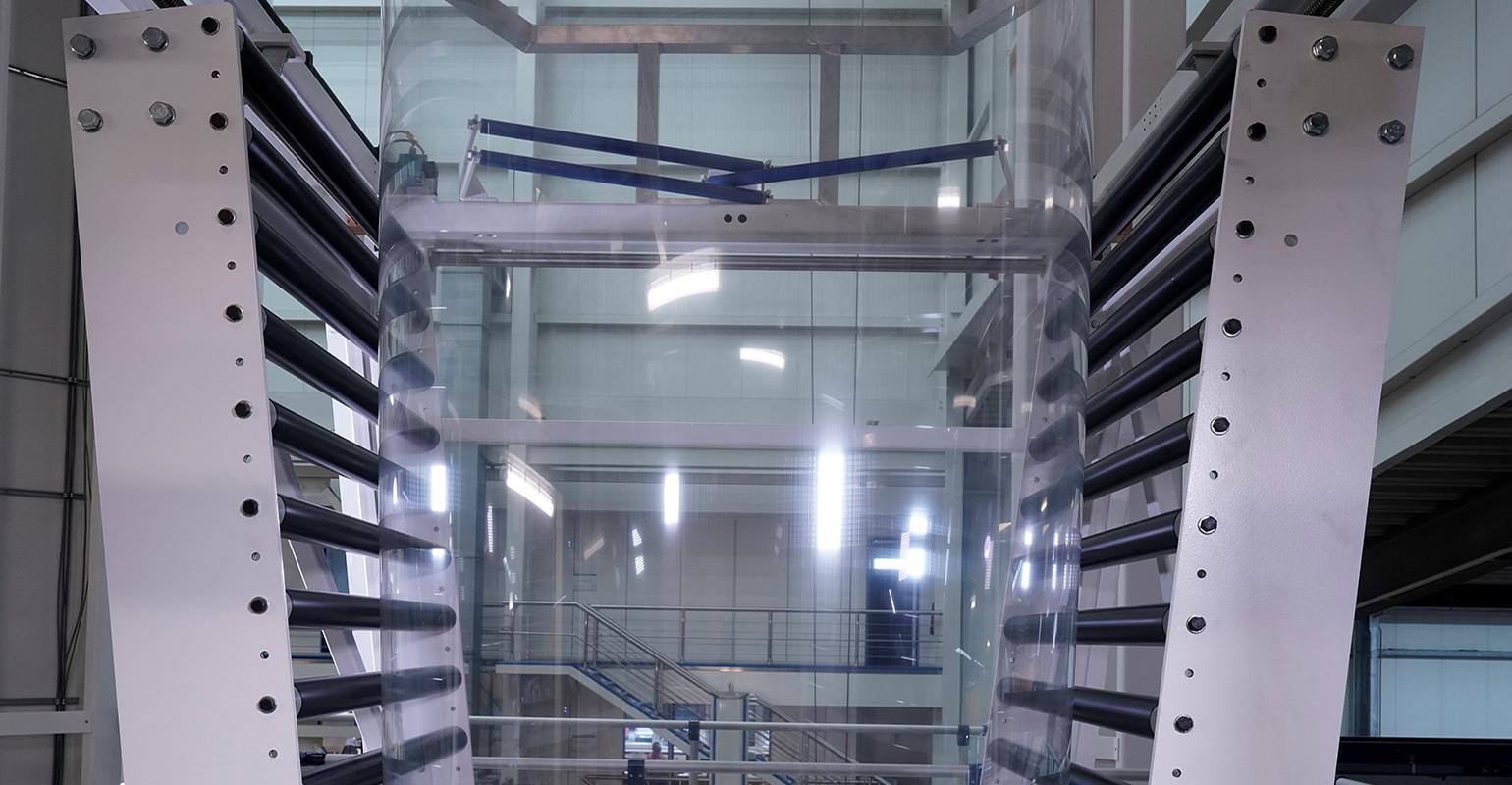 While mono-material film structures are a modern solution for packaging applications that require both high performance and environmental attributes, the production of full polyolefin (PO) films poses challenges for plastics processors. Plastics processors have to adapt and expand their manufacturing equipment and meet all the requirements of the food industry.

“We have been building Triple Bubble blown-film lines for over 20 years and, thus, have an enormous wealth of experience both in terms of machine technology and formulation development,” said Jürgen Schiffmann, Managing Director of Kuhne Anlagenbau. “We have transferred this know-how to five-layer full-polyolefin film structures, an alternative that has many advantages over conventional blown-film lines with machine direction orientation (MDO) stretching units.”

Kuhne Anlagenbau tested and optimized the five-layer structures at its in-house technical center on a 13-layer Triple-Bubble R&D line. The result is a uniformly oriented film with a full PE or PP barrier film structure. The primary advantages of these film structures are their sealability and the waste-free production process, said Kuhne.

There are few packaging solutions today that don’t involve a barrier function, especially when it comes to food products or pet food. “The term mono-material is somewhat misleading,” explains Schiffmann, “because all commercially available full-PO films contain up to 5% of foreign material in order to achieve the desired barrier properties.”

In Kuhne’s construction, the sealing layer consists of materials such as metallocene PE or plastomers, and the inner EVOH barrier layer is enclosed by two PE-based tie layers. An HDPE blend is used for the outer layer. “With the same line configuration, we can also produce a mono PP film without any modification,” emphasized Schiffmann.

The technology is just as flexible in terms of the film thickness, which can vary between 15 and 150 microns, and its properties. Shrinkage is also adjustable, depending on whether the film is to be used for stand-up pouches, coffee, and snack packaging, which require non-shrinkable films, or for lid films, which require slightly shrinkable films. Bottom web film for food packaging can also be designed to be thermoformable and even deep-drawable and shrinkable for form-shrink applications.

Since the films are produced using Triple Bubble technology, they have the same properties and thickness over the entire circumference. In the first bubble, the film tube is rapidly doused with water in order to achieve ideal amorphous properties; in the second bubble, simultaneous biaxial orientation is imparted; and annealing takes place in the third bubble.

Kuhne Anlagenbau's technology also eliminates the need to laminate a multi-direction olefin film with a sealing layer. “Our films are directly sealable and can be processed further,” said Schiffmann, adding another economic and environmental argument for the production of mono-material film structures with Triple Bubble technology.