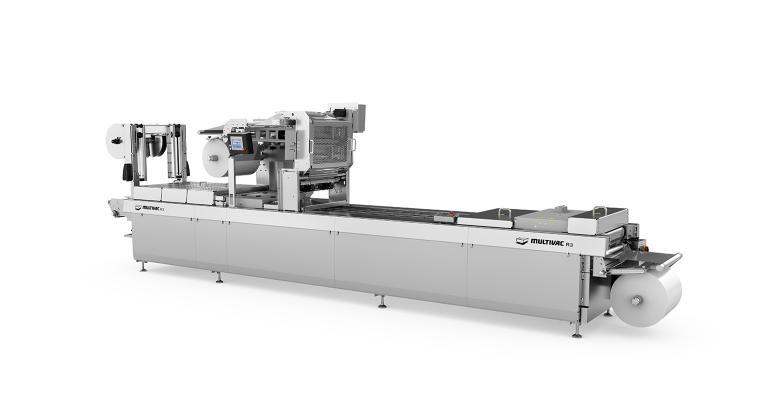 The versatile new R3 thermoforming packaging machine developed by Multivac is designed to process recyclable single-material films consistently and reliably with minimal maintenance. The machine also features a modular construction such that it can be easily adapted to suit a range of customer requirements. The objective in designing the R3 thermoformer, which will be available starting in July 2022, was to find "best-fit" machine configurations for small and medium-sized companies as well as larger companies with tight budgets, said Multivac.

The forming station applies heat to the lower web, so that packaging cavities can be thermoformed by means of compressed air and vacuum. Once the thermoforming process is complete, manual or automatic loading of the product into pack cavities commences. Then the lower web is sealed hermetically to the upper web in the sealing die. The final stage involves severing individual packs from the strip of packs in the web by means of cross-cutting units and a longitudinal cutter. The R3 achieves a speed of 12 cycles per minute at its peak level and can, therefore, reach the output of high-end slicer lines, according to Multivac.

As brand owners move away from multi-layer films, which cannot be recycled, and transition to mono-material recyclable films such as APET or PP, processors often must wrestle with aesthetic issues, such as the slight waves at pack edges caused by conventional thermoforming machines. “In order to solve this problem, we have equipped the R3 with all-over heating, which heats recyclable films very evenly,” explained Multivac Product Manager Michael Landerer.

In addition, the chain guides for the web advance can be adjusted individually and are decoupled from all the forces of the machine processes, resulting in the weight of the die set being borne entirely by the side frames. Therefore, no vibrations are transmitted to the film. “This enables us to achieve a constant web tension and consistently prevent waves at the edges of the pack, guaranteeing optimal pack appearance with films made from mono materials such as polypropylene,” said Landerer.

Several features have been designed into the R3 thermoformer to minimize maintenance.

The number of moving parts in the lifting unit have been reduced and lubricants have been eliminated. In addition, sealing plate changeovers have been simplified.

Service technicians typically have to lift the complete top section of a 100-kg die when making a change. In the R3, the sealing plate, which only weighs around 20 kg, can be unscrewed from the top section and pulled into the loading area. “The cooling water circuit in the top section remains unaffected, which is a huge benefit," according to Landerer. “It means that it is no longer necessary to drain the cooling water, which not only costs time but also involves a contamination risk,” he said.

Finally, the underside of the frame on the thermoforming packaging machine has been reinforced. This makes it possible to lift the entire machine at a central point with a forklift, for example. “Thanks to this reinforcement, it is possible to quickly alter the position of the machine in the event of any line changes,” said Landerer.