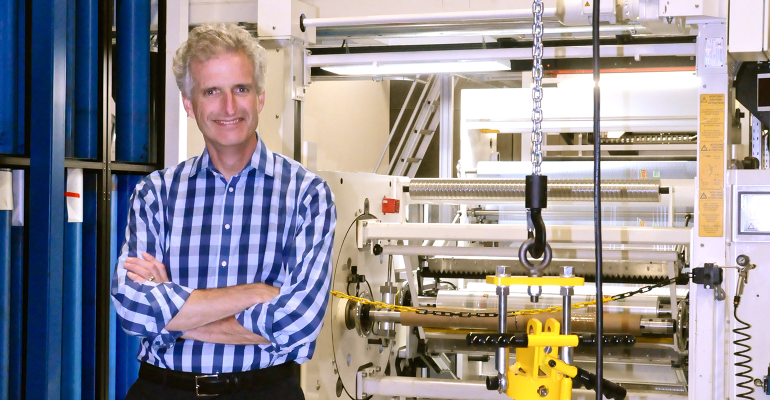 Kevin Kelly, CEO of Emerald Packaging, which is the largest supplier of flexible packaging for produce in the US.
What do California’s SB 54 requirements for extended producer responsibility mean? Emerald Packaging’s CEO provides perspective.

What’s California’s SB 54 Legislation all about?

Last week, sustainability expert Robert Lilienfeld provided guidance to the legislation, which requires that all single-use plastic packaging sold in or imported into California be recyclable or compostable by 2032.

It affects numerous companies and managers including Kevin Kelly, CEO of Emerald Packaging, based in Union City, CA. The flexible packaging maker lays claim as the largest plastic packaging supplier for produce in the US. Products include rollstock, pouches, bags, and lidding.

In March 2022, Emerald Packaging become a signatory to the Ellen MacArthur Foundation’s New Plastics Economy Global Commitment and will reduce its plastic use by 2025. It's also signed the Foundation’s call for a legally binding UN Plastics Pollution Treaty on Plastics Pollution. It’s one of the few flexible packaging companies in the US to make these commitments.

Kelly shares his views of the legislation and what that means in an exclusive Q&A interview.

How will this affect businesses in California?

Kelly: This is the most dramatic change to recycling in California in its history. Though it will add a lot of work, it’s long overdue. The plastics industry will have to step up — as will our customers — to create a robust recycling system that can handle flexible packaging. We now must be part of the solution with active participants because the bill requires participation in an EPR scheme.

How has Emerald responded to this?

Kelly: We will continue partner with our customers in the produce industry. Packaging produce reduces food waste, a leading cause of greenhouse gas, and cutting food waste is a state-wide priority. These are the kinds of tradeoffs — food waste vs. plastic reduction — that state regulators will have to grapple with in the coming years.

We need to help steer this conversation. We’ve worked hard over the last few years to make our packaging recyclable and to increase use of post-consumer resin. We’re starting to make more progress on using post-consumer recycled (PCR) content due to the mandates in the law.

What should companies be doing to prepare now?

Kelly: They should be working to shift towards recyclable packages. Even if the packaging cannot be curbside recycled yet, we need to prepare for such systems. We have specific recycling targets to hit as an industry, yet there’s a lot of work ahead. Plan on attending many meetings of CalRecycle, which is the state agency charged with implementing the bill. 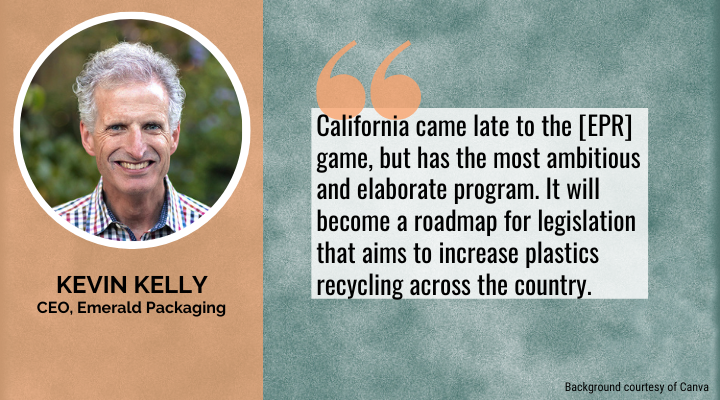 How will it affect consumers?

Kelly: Even though the bill says that consumers can’t bear the costs of new systems, obviously companies will find a way to pass costs along. Likely some things they are used to buying packaged will have to go bulk. And why not? Also, reuse is one way to cut waste that’s long overdue.

What might be the impact of this legislation in other states?

Kelly: Several states already have EPR laws that force the entire supply chain from consumer packaging goods brand to manufacturer to customer to grocer to participate in funding to support creating recycling systems for plastics. California came late to the game but has the most ambitious and elaborate program. It will become a roadmap for legislation that aims to increase plastics recycling across the country.

What will be the short-term and long-term results?

Kelly: In the short run, you’ll see more investment in PCR content manufacturing across the country thanks to the demand the new law will generate. We need to create infrastructure to supply plants with PCR feedstock.

Long term, you’ll see an explosion in the PCR use and heavy investment in recycling systems across the board. Whether these moves help the industry meet the ambitious recycling rates goals set by the law remain to be seen.

What do you see as the most positive aspect of the law…and what’s the most negative?

Kelly: We now have certainty as to laws governing plastics, which will help us build a business plan.

Potential negative effects loom if the state doesn’t make the promised investments in infrastructure to recycle plastic films. Then what, ban plastics? Given the bent in state government, that’s entirely possible.