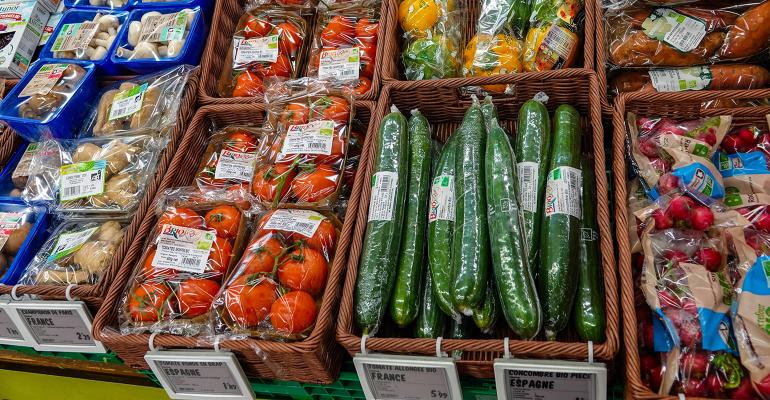 Since Jan. 1, 2022, plastic packaging cannot be used with 30 types of fruits and vegetables in France, and single-use plastic and compostable plastic shopping bags are prohibited in Vancouver’s retail outlets.

The assault on plastic packaging and single-use plastic bags continues unabated in 2022. France and the city of Vancouver in British Columbia ushered in the new year with new plastics bans, and more are coming, notably in New Jersey.

In France, as of Jan. 1, 2022, il est interdit to wrap 30 types of fruits and vegetables in plastic, including cucumbers, eggplants, leeks, bananas, and oranges. There are some exemptions — packaged produce weighing more than 1.5 kg (3.3 lb), chopped and processed fruit, and fragile items such as raspberries and blueberries — but the reprieve is temporary. Plastic packaging will be phased out for all whole fruits and vegetables by 2026, according to news outlet France 24.

French President Emmanuel Macron has called the ban “a real revolution” and said France was taking the lead globally to gradually phase out all single-use plastics by 2040, according to British daily The Guardian. Associations representing the packaging and fresh produce sectors were less enthused.

Laurent Grandin, head of the Interfel association’s fruit and vegetable sector, told Agence France Presse (AFP) that the costs are “insurmountable” for small companies that export products, such as apples, to the United Kingdom and elsewhere. One producer in the Loire Valley has introduced 100% cardboard packaging for its apples, but costs have soared as much as 30% as a result, according to a company representative quoted by AFP.

Vancouver rang in the new year by banning businesses from handing out single-use plastic and compostable plastic shopping bags. Customers can request paper bags, but they will need to pay a minimum of 15 cents for the privilege. That fee will increase to 25 cents in 2023. Oh, and the cost of your cup of Joe may increase in Vancouver, as well: If your caffeine fix comes in a disposable cup, it will set you back an additional 25 cents.

Meanwhile, New Jersey — inextricably linked with waste management by virtue of The Sopranos — is determined to stem the tide of plastic waste fouling its roads and waterways through a far-reaching statewide ban. Starting on May 4, 2022, retail outlets, grocery stores, and food service businesses will be prohibited from providing customers with single-use carryout bags or polystyrene foam food service products. Single-use paper bags are permitted, except by grocery stores equal to or larger than 2,500 square feet, which are only allowed to provide or sell reusable carryout bags.

Considered to be the nation’s most wide-ranging ban on disposable plastic products, New Jersey joins 18 other states with plastic bag bans set to go into effect this year, according to News Around New Jersey.

And that’s a wrap, for now. This bandwagon is bound to keep on rolling, though — we’ll try to keep pace and provide some commonsense commentary along the way.