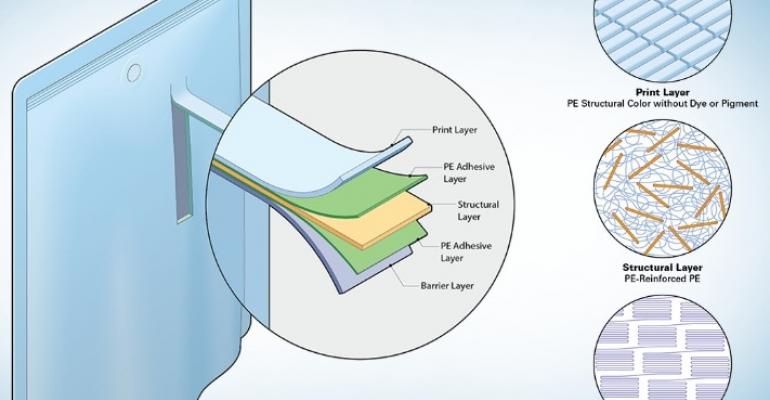 The team from the University of Pittsburgh's Swanson School of Engineering has received $200,000 from the Ellen MacArthur Foundation and NineSigma to apply nano-engineering to the development of a recyclable material that can replace multi-layer packaging.

Plastic packaging has come a long way over the past few decades, but many of those advances have made the packaging itself impossible to recycle.

Recently, a research team at the University of Pittsburgh won a $200,000 International Circular Materials Challenge prize from the Ellen MacArthur Foundation and NineSigma to deal with this problem. The team from Swanson School of Engineering suggested using nano-engineering to create a recyclable material that can replace complex multi-layered packaging used in food and beverage containers.

Nano-engineering technology mimics the way nature uses just a few molecular building blocks to create a tremendous diversity of materials. By manipulating polyethylene (PE) molecules, the researchers can design each PE layer to perform a specific function that otherwise would have required a different material, creating a fully recyclable PE product, such as a juice box.

Speaking with PlasticsToday in a telephone interview, team member Associate Professor Sachin Velankar said that while the idea is “rather simple, execution is the hard part.”

Velankar noted that multi-layer plastic containers that are designed as oxygen barriers to extend the shelf life of food and drink products are difficult to deal with when it comes to recycling. It is sometimes possible to create an additive for the various plastics to improve compatibility of the various layers, something he called “a very useful idea.” However, sorting these various materials to enable recycling is nearly impossible.

The multi-layer barrier process isn’t new, Velankar said, citing an example of a plastic beer bottle designed in the late 1990s that was a big hit. The bottle was lightweight, which made it easy for snack vendors at event arenas to carry them up and down the stands. However, the company that developed the bottle had to add nylon as an oxygen barrier to keep the beer fresh and foamy, making it unrecyclable.

Assistant Professor Susan Fullerton, also on the research team, said that there are some four million tons of multi-layer packaging land-filled every year. “We can’t reinvent the recycling infrastructure, so the idea is to work with the existing recycling technology,” she said.

When asked about waste-to-energy as an easier alternative, Velankar said that although the plastic itself burns clean, various additives in plastics are more difficult to incinerate cleanly.

The team from the Swanson School of Engineering, which also includes Eric Beckman, Distinguished Service Professor and Co-Director of Pitt’s Mascaro Center for Sustainable Innovation, is just starting to work on their idea of using nanoengineering. Fullerton said the team is learning from fundamental studies published in the polymer science literature over the past decades and applying it in a different way. “The key will be coaxing the material into the various nanostructures necessary to replace the individual layers—coming up with a way to recycle what was formerly unrecyclable,” she explained.

Neither Fuller nor Velankar are pleased about the current efforts to ban plastics.

Velankar said that plastic in and of itself is a “very benign product—provided it ends up in a landfill.” The problem comes not from plastic itself but from the improper disposal of it. “How do plastics end up in the middle of the Pacific Ocean,” he asks theoretically. “Given the nature of plastic, proper disposal is a critical issue. We need to focus on the problem.”

As with most innovations, particularly in the scientific realm, what is possible often is not practical. Fullerton addressed this issue: “As part of the Ellen MacArthur Foundation award, we are fortunate to be part of a 12-month accelerator program in collaboration with Think Beyond Plastic, connecting us with experts who can help us uncover potential problems and scale the innovation,” she said. “Instead of building the research from the bottom up—like we are used to in most of our fundamental research projects—this is more of a top-down approach.”