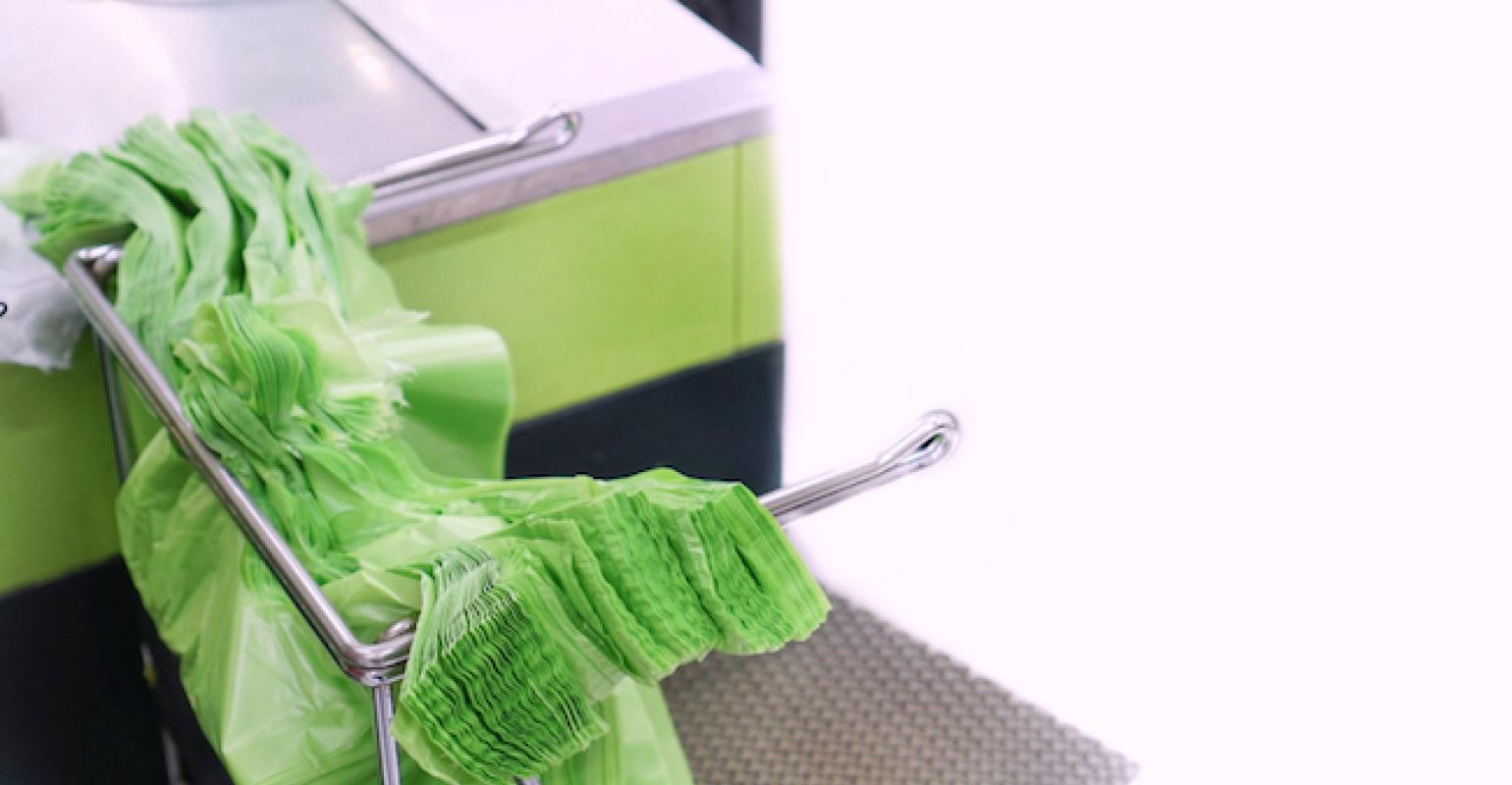 A huge increase in the use of paper bags, together with an observed uptick in the purchase of plastic trash bags, means banning plastic shopping bags actually increases greenhouse gas emissions, according to a researcher in Australia.

About 20 years ago, a woman in Phoenix invented clips to hold plastic bags on garbage cans so you can put trash in them easily. I interviewed her and she gave me several of her newly invented garbage can clips. I use them to this day!

An excerpt from an article in Planet Money’s newsletter noted that it was about 40 years ago that plastic overtook paper as the preferred retail bag at grocery stores. But it seems that these bags have become a problem of late. They end up in the environment because people tend to be litterbugs and do not put these bags into the proper recycling bin at the grocery store.

A study done by University of Sydney economist Rebecca Taylor found that bag regulations in California resulted in a classic tale of unintended consequences. You’ve heard me talk about the law of unintended consequences always being in play. Well, here’s another example: “Bag leakage: The effect of disposable carryout bag regulations on unregulated bags.”

Taylor and her colleagues compared bag use in cities with and without plastic bag bans. They spent six months in grocery stores tallying the types of bags people carried out and analyzing the stores’ sales data. She found that these bag bans did what they were supposed to do: People in cities where bans were in effect used fewer plastic bags, which led to about 40 million fewer pounds of plastic trash per year. “But people who used to reuse their shopping bags for other purposes, like picking up dog poop or lining trash bins, still needed bags,” noted the Planet Money article.

“What I found was that sales of garbage bags actually skyrocketed after plastic grocery bags were banned,” said Taylor. This was particularly the case for small, 4-gallon bags, which saw a post-ban 120% increase in sales, the article noted.

The article in Planet Money noted that regular trash bags are “thick and use more plastic” than typical carryout grocery bags. “So about 30% of the plastic that was eliminated by the ban came back in the form of thicker garbage bags,” Taylor said. Additionally, cities that banned plastic bags saw a “surge in the use of paper bags,” which Taylor estimates resulted in about 80 million pounds of extra paper trash per year.

“Plastic haters, it’s time to brace yourselves,” said the article. A number of studies have found that paper bags are actually worse for the environment, which I’ve actually pointed out in a number of my blogs. Paper requires cutting down trees or using a high percentage of recycled paper, which still has to be processed using lots of water, toxic chemicals (including chlorine, if the paper is to be made white) and fuel in the heavy machinery required.

“Taylor says, the huge increase in paper, together with the uptick in plastic trash bags, means banning plastic shopping bags increases greenhouse gas emissions,” said the article. While the article acknowledges that plastic bag bans do reduce non-biodegradable litter, it still takes a considerable amount of time for paper to degrade in the open environment, which means it’s still an eyesore and doesn’t do the environment any good.

Igor Catic, Professor Emeritus of Plastics Engineering at the University of Zagreb, Croatia, recently sent me a similar news item that appeared on a Croatian news portal. It seems that many countries are now recognizing that ecological problems are cropping up with the increased use of paper bags. The organization cited in the Croatian news item, Stop Single-Use of Paper, is pushing to reduce paper bags and replace them with plastic. “This is confirmed by American sources that just arrived,” said Catic. “Namely, the use of paper bags has increased by more than 500% since New York introduced a ban on plastic bags and [started to] charge five cents for paper bags. In order for the paper bag to have the same ecological footprint as a plastic [one], it must be used at least 43 times, according to Danish data.”

The Planet Money article also cites a 2011 study by the UK government that found a person would have to reuse a cotton tote bag 131 times before it was better for the environment than using a plastic grocery bag once. When you factor in the manufacturing process used to make cotton bags, the impact on the climate is even worse than plastic.

Cotton, if grown in the United States, requires planting with heavy equipment, which uses fuel; weed killer; and the use of an exfoliant to remove cotton leaves before the cotton balls can be harvested using more large machines fueled by diesel or gasoline. Then there’s the process of actually manufacturing the cotton items. The Danish government estimates that “these factors make cloth bags even worse than plastic,” said the Planet Money article. “They estimate you would have to use an organic cotton bag 20,000 times more than a plastic grocery bag to make using it better for the environment.”

The Danish government study concluded that the best reusable bags “are ones made from polyester or plastic like polypropylene” but cautions that “those still have to be used dozens and dozens of times to be greener than a plastic grocery bag, which has the smallest carbon footprint for a single use.”

Plastic is fantastic in many ways. The next time you go to the grocery store, tell the store manager that you want the eco-friendly plastic carryout bags.