The original PC cooling jacket had a two-part construction and suffered from cracking and poor tolerances. In manufacture, it 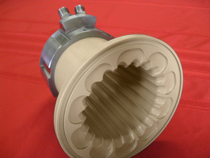 required a great deal of machining, which added a tremendous amount of internal stress. Ensinger, in consultation with its distributor AIN Plastics, a division of ThyssenKrupp, offered ORNL a one-part design using Victrex PEEK for the cooling jacket. Daytona Beach, FL based AIN machined the final part, carrying tolerances of ± .001 inch.

The plasma chamber containing the RF-driven multicusp ion source measures about 76 mm (3 inches) in diameter and 178 mm (7 inches) in length. The ions produced are formed into a pulsed beam and accelerated to very high temperatures. This creates plasma, which puts a nominal 3-kW heat load on the plasma chamber, which must be cooled, according to Robert Welton of SNS. Welton said the function of the cooling jacket is to cool the plasma chamber by channeling water around it.

Victrex said its PEEK polymer offers the component a number of sought-after properties including, low thermal conductivity to prevent the ions from reaching high temperatures, radiation resistance because x-rays are present, chemical resistance to prevent reduction by hydrogen, and electrical properties because of low RF losses.