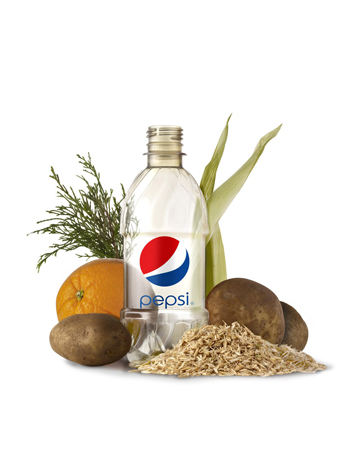 In the future, PepsiCo expects to broaden the renewable sources used to create its "green" bottle to include orange peels, potato peels, oat hulls, and other agricultural byproducts from its foods business. PepsiCo Chairman and CEO, Indra Nooyi, noted that as one of world's largest food and beverage businesses, it is in the position to source such agricultural byproducts from its foods business to "manufacture a more environmentally-preferable bottle for our beverages business."

PepsiCo will pilot production of the new bottle in 2012, and upon successful completion of the pilot, it intends to move directly to full-scale commercialization. PepsiCo said it combined biological and chemical processes to create a molecular structure that is "identical to petroleum-based PET", and results in a bottle that looks, feels and protects its product in the same manner as existing PET beverage containers.

In May 2009, competitor Coca Cola announced its Plant Bottle, which would be partially from plants and fully recyclable. Coca Cola said the bottle would be made from a blend of petroleum-based materials and up to 30% plant-based materials. Coca-Cola North America piloted the PlantBottle with Dasani and sparkling brands in select markets in 2009, with plans to use it with vitaminwater in 2010.