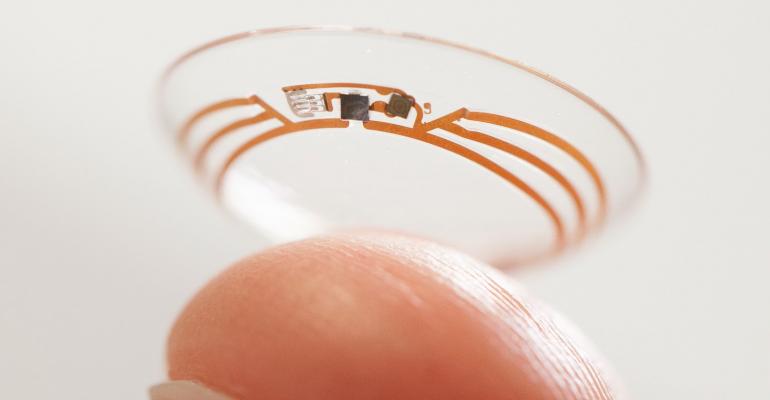 Google is joining forces with scientists at the University of Washington in an effort to commercialize a sensor placed in a soft contact lens that can detect glucose levels in diabetics.

Google is joining forces with scientists at the University of Washington in an effort to commercialize a sensor placed in a soft contact lens that can detect glucose levels in diabetics.

A U.S. patent was awarded a month ago for a contact lens having an integrated glucose sensor to the University of Washington through its Center for Commercialization (Seattle, WA). Last week, one of the inventors, Brian Otis, joined a Google researcher in disclosing their joint development of the invention through Google X, a stealth R&D group that made big headlines with its project to develop glasses that can search the Internet.

The post on the Google "Official Blog" stated: "We're now testing a smart contact lens that's built to measure glucose levels in tears using a tiny wireless chip and miniaturized glucose sensor that are embedded between two layers of soft contact lens material. We're testing prototypes that can generate a reading once per second."

"We're also investigating the potential for this to serve as an early warning for the wearer, so we're exploring integrating tiny LED lights that could light up to indicate that glucose levels have crossed above or below certain thresholds. It's still early days for this technology, but we've completed multiple clinical research studies which are helping to refine our prototype."

The invention seeks to overcome a significant problem facing diabetics: how to easily and continually be aware of their blood sugar levels so they can take insulin or avoid fainting from an over dose of insulin.

Most diabetics take blood samples from their fingers three times a day to test their blood sugar, but many lapse, often resulting in high levels of blood sugar.

The patent describes significant involvement of plastics. In one iteration, a plastic substrate is coated with immobilizing materials such as polymethylmethacrylate (PMMA) or polydimethyl siloxane (PDMS). An immobilizing material is used to provide resistance to chemicals used in semiconductor manufacturing processes. A photovoltaic component which provides power is encapsulated in polymers such as parylene.

"Contact lenses and polymer test templates with metal interconnects and pads for solar cells were fabricated on optically transparent wafers of polyethylene terephthalate (PET)", according to the patent.

Plastic discs with assembled cells were molded into contact lenses at 392ºF on an aluminum mold.

The Washington invention was made with support under a grant (25969810-50204-A) awarded by the Defense Advanced Research Projects Agency of the Department of Defense, and a grant (EFR0937710) awarded by the National Science Foundation. The government has certain rights in the invention.