The sheer numbers around the power outages that darkened India earlier this week—more than 600 million without electricity, grids collapsing in 14 states—placed the emerging country beneath a worldwide media spotlight. But for the Indian plastics industry, including both domestic and foreign firms, spotty power is a largely accepted reality in a country whose energy demand has consistently outstripped its production since economic reforms starting in 1991 pushed it unto the global economic stage.

The sheer numbers around the power outages that darkened India earlier this week—more than 600 million without electricity, grids collapsing in 14 states—placed the emerging country beneath a worldwide media spotlight.

But for the Indian plastics industry, including both domestic and foreign firms, spotty power is a largely accepted reality in a country whose energy demand has consistently outstripped its production since economic reforms starting in 1991 pushed it unto the global economic stage.

"Consistent availability of competitively priced power is crucial to the plastics industry," Jayesh Rambhia, president of the All India Plastic Manufacturers Association, told PlasticsToday, before stating plainly, "India has a deficit in power."

Rambhia noted that power cuts across country are routine, varying from 1 to 2 days/week, or a few hours/day depending on location and seasonal demand. It's his view, however, that such cuts should not be the reality for industry.

"Industry should get preference in power supply," Rambhia said. "Industry should not be made to pay for power subsidies to agriculture or consumers." Rambhia told PlasticsToday that his own company is in Mumbai, where power is "costly but consistently available."

Power-hungry equipment as part of the problem
Rambhia said a possible partial solution to the power problem could be state incentives for companies like his to upgrade to new, more energy efficient equipment.

"India has a power deficit, but many of our machines are old and consume nearly 40% more power than modern machines," Rambhia said. "We have asked the central government to give a one-time tax holiday for upgrading of old machines with new energy-saving drives and controls. It would benefit environment, industry, and other consumers of power."

"The present outage in India, resulting from technical reasons, is restored to a large extent now," Sarkari said. "We do not believe that this would impact the medium- to long-term prospects of the industry."

For Sanjeev Yadav, general manager of quality and product development at biaxially oriented polypropylene (BOPP) film manufacturer Max India Ltd. Chandigarh, outages are a non-issue. Yadav said his plant, which is located in North India state of Punjab, gets direct power supply from Punjab Government into its own 132-KV power substation.

"Our power supply disrupts only if there is issue in main grid," Yadav said, "which happened once or twice in a decade."

India's enduring allure
While the global average for per capita consumption of plastics is 26 kg, with North America and Western Europe topping out at 90 and 65 kg, respectively, India's per capita consumption comes in at 5 kg, well below China (12), Southeast Asia (10), and Latin America (18), according to India's Central Institute of Plastics Engineering & Technology (CIPET).

With a population of 1.2 billion, the possibility that the average Indian could consume even a little more plastic has made the country a target for investment by western firms.

Auxiliary supplier Conair was among the western companies setting up shop in the country, establishing a 50/50 joint venture called Nu-Vu Conair Pvt. Ltd. in 2007. Headquartered in a 43,000-sq-ft (4000 sq m) facility in Ahmedabad, India, it is managed locally by Bhaumik V. Patel, K.M. Shah, Ajay Shah, and S.P. Kudva.

'Part of daily life'
In response to questions from PlasticsToday, the company said that since it's located in the western state of Gujarat, it was not affected by the outage, since the power-grid failures were limited to northern and eastern regions of India. The company said its suppliers were not impacted either, but that "many" Conair customers were affected, although power was restored within 8 to 15 hours.

"Power shortages are a part of daily life in India, and businesses operate accordingly," the company stated, noting that to limit demand, industrial power is shut off one day each week in the different states. "For Nu-Vu Conair, in Gujarat, that day is Thursday and so that day is a regularly scheduled day off," the company spokesperson explained.

Nu-Vu Conair also noted that to cope with unscheduled power outages, most mid-sized and large industrial companies have their own, captive diesel or gas generators.

Powering up for the future
The subtitle for India's Ministry of Power 2011-2012 Annual Report states the importance of power plainly: "Power: The building Block of the Economy." That year's report and previous editions show a country that has consistently invested in its power infrastructure but still consistently failed to match output with demand. 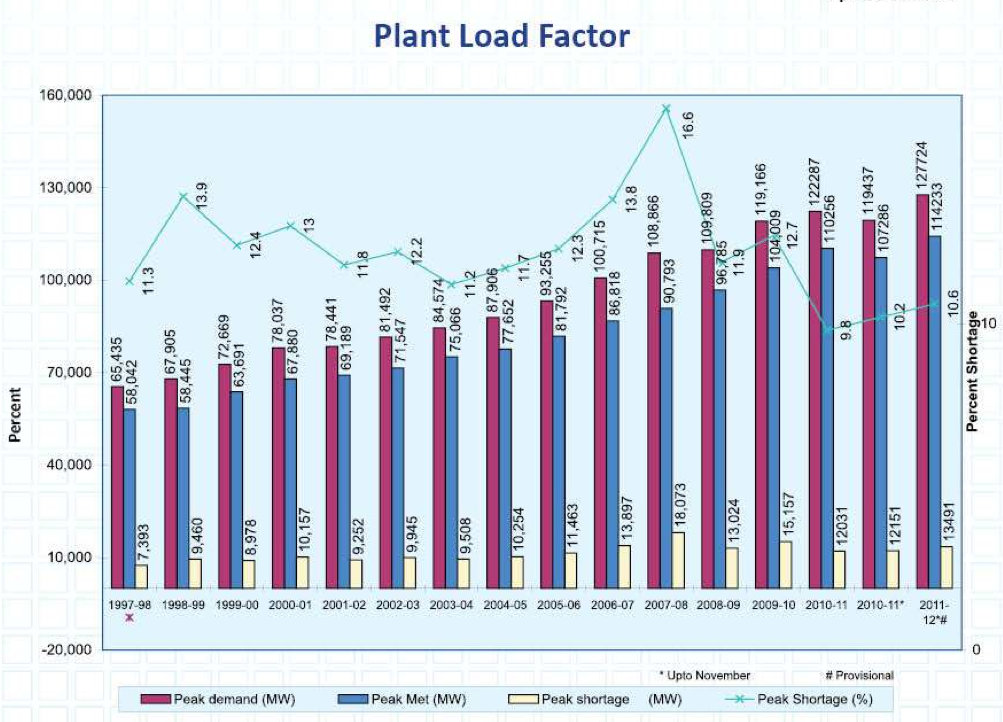 According data on "plant load factor", which is an index of installed capacity utilization, the overall utilization percentage has been in decline with the global economy since the onset of the worldwide economic crisis. Capacity utilization most recently peaked in 2007-2008 at 78.6%, but has since seen declines every year since, with 2011-2012 coming in at a projected rate of 71.6%.

In April, India's Minister of Power Shri Sushilkumar Shinde addressed the World Energy Leaders Summit in Istanbul, noting at the time that his country is the fifth largest energy consumer in the world, although its per capita primary energy consumption is only 580 kilograms of oil equivalent (kgoe). More than two-thirds less than the global average of 1800 kgoe.

In a way foreshadowing the recent massive outages, Shinde told the summit that energy requirements in India were expected to continue to grow in the coming years, projecting that India would leapfrog to the third largest energy consumer by 2020, trailing only the U.S. and China.