Nanosheets made from poly-L-lactic acid (PLLA) show tremendous potential for use in wound-dressing applications. The materials can cling to the body's most difficult-to-protect contours and keep bacteria at bay.

Nanosheets made from poly-L-lactic acid (PLLA) show tremendous potential for use in wound-dressing applications. The materials can cling to the body's most difficult-to-protect contours and keep bacteria at bay. 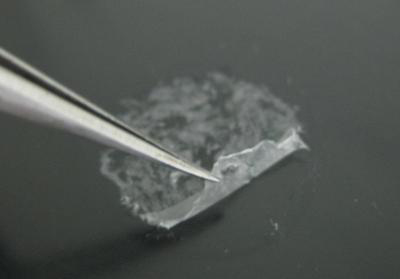 The researchers are speaking about the materials, which they've tested on mice, at the 248th National Meeting & Exposition of the American Chemical Society (ACS), the world's largest scientific society. The meeting is being held in San Francisco, CA, through Thursday, Aug. 14.

Yosuke Okamura, PhD, explains that existing wound dressings work well when it comes to treating burns on relatively flat and broad areas. But the human body has curves, wrinkles, and ridges that present obstacles for these dressings. Okamura's team has developed a novel biomaterial out of tiny pieces of flexible and sticky nanosheets.

"The nanosheets can adhere not only to flat surfaces, but also to uneven and irregular surfaces without adding any adhesives," he says.

That would make a big difference in the way burn victims are treated. According to the Centers for Disease Control and Prevention, someone is injured by fire every 30 minutes. Burn wounds are vulnerable to infection, and keeping them sealed off from bacteria is essential for a successful recovery.

Okamura's team at Tokai University (Tokyo) put the PLLA into a test tube with water and spin it, which breaks up the sheets into even smaller pieces. When they pour the liquid onto a flat surface, the tiny fragments overlap in a patchwork and dry as a single nanosheet.

They tested the nanosheet's ability to coat small and irregular shapes by dipping different things into the mixture, including a metal needle and a mouse's fingers. The nanosheet effectively covered even the smallest bumps and wrinkles on the mouse's digits, and after the material dried, it clung in place.

When the researchers tested the nanosheets on burns, the dressing effectively kept out the common bacteria, Pseudomonas aeruginosa. This species of pathogen is often a culprit in skin infections and is notorious for causing hospital-acquired infections that can be deadly. Multidrug resistant strains are also a serious concern.

The dressing protected wounds from infection for three continuous days. With an additional coating, the nanosheets kept bacteria out for a total of six days. That means the material, if approved for use on human patients, could cut down the number of times dressings have to be changed. With an eye toward human clinical trials, the researchers are currently planning large-scale animal tests and safety tests.

In addition to PLLA nanosheets, Okamura's group has recently started developing a novel set of similar, super-flexible, patchwork coatings composed of polymers with a phosphorylcholine group. They have shown that these materials are compatible with blood and could act as coatings for medical devices, such as catheters.