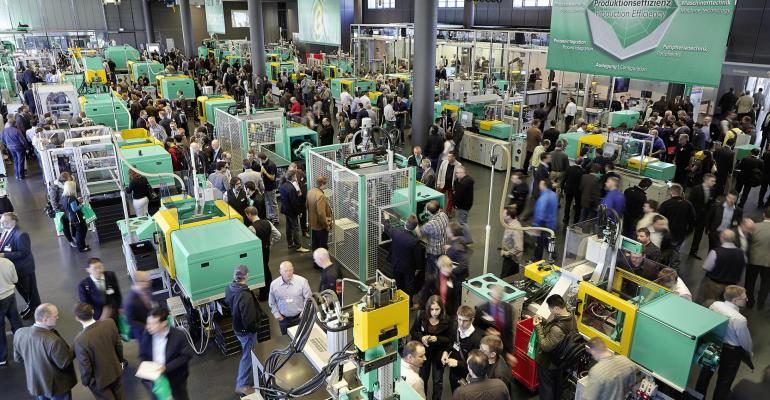 Lossburg, Germany—Production efficiency can help companies gain a competitive edge and: "this is how we help our customers," said Arburg's Managing Director Sales Helmut Heinson at the press conference held at the start of the annual Technology Days at the company's headquarters in the Black Forest town of Lossburg.

Lossburg, Germany—Production efficiency can help companies gain a competitive edge and: "this is how we help our customers," said Arburg's Managing Director Sales Helmut Heinson at the press conference held at the start of the annual Technology Days at the company's headquarters in the Black Forest town of Lossburg.

Customers that are increasingly based in the U.S.. "We see manufacturing returning to the U.S.," said Heinson. "This is accompanied by high levels of investment in new machines, which we are matching with our own investment in new headquarters in Rocky Hill, Connecticut. For us, the U.S. is a growth market." He added: "We are seeing a similar reindustrialization process in the UK, as well. But so far, not elsewhere in Europe." 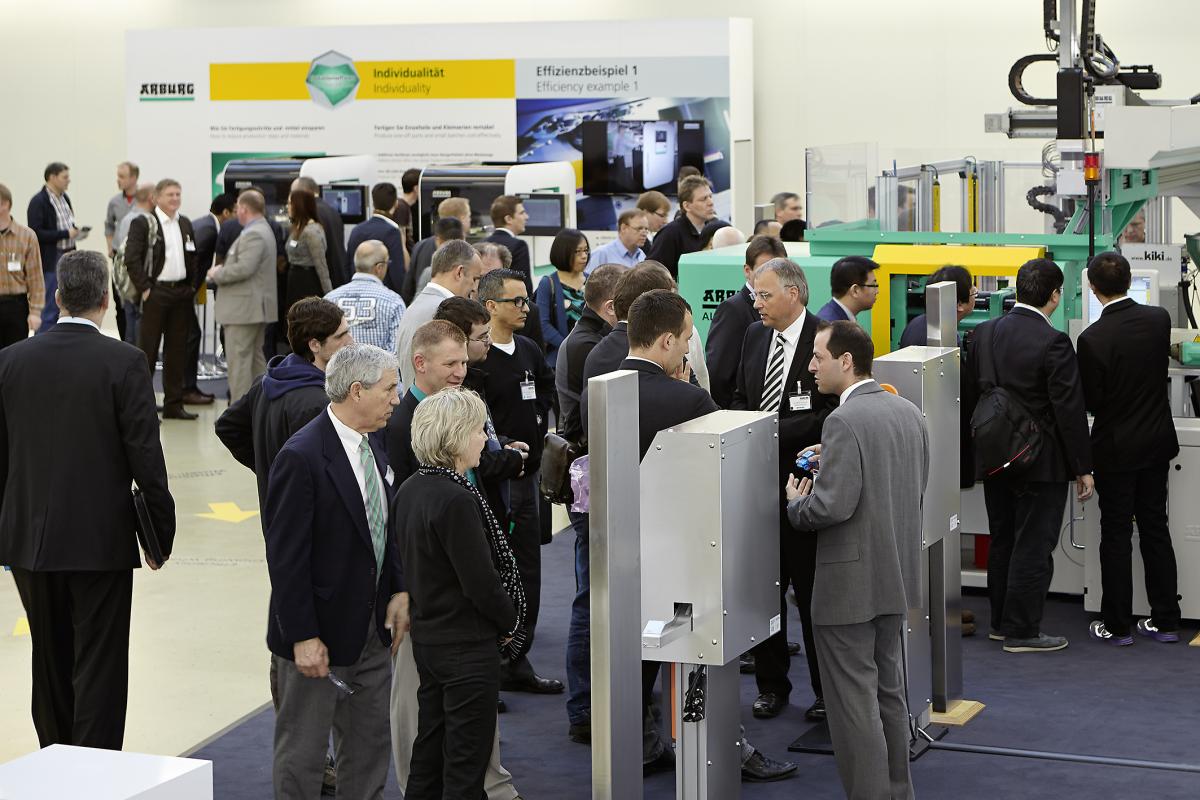 Production efficiency is driving demand for bigger machines, as reflected by the growth in large-tonnage presses with clamping force up to 500 metric tons. "Mainly, these are for packaging applications, where multi-cavity molds that require bigger machines are common," remarked Heinson.

Production efficiency was the central, overarching theme of this year's event, as was amply evidenced during visit to the 'Efficiency Arena.'  Here, five stations were set up, each demonstrating one of five important aspects of efficiency.

The exhibit started with the aspect of 'Individuality,, as illustrated by the FreeFormer, 3D printing machine, introduced at last year's K fair, which makes cost-effective individual production of one-off parts and small-volume batches possible without the need for a mold. The Arburg Plastic Freeforming (AKF) process is unique in that it uses standard granulate, which, as it melts, builds up tiny droplets layer-by-layer to produce fully functional components from 3D CAD files. Multicomponent printing in different colors is also possible. Asked about the current interest of the market in the FreeFormer, Heinz Gaub, Arburg's new managing director of technology and engineering noted that the first 20 were due to be delivered to customers in various sectors, one of which was Materialise. He said that Arburg was looking forward to cooperating intensively with the Belgian prototyper. "They have the software - we have a unique machine," he stated.

The second station demonstrated the aspect of 'Flexibility,' with reference to the interaction of man and robot, and how automation solutions can make sense even for the production of small and medium-sized series, such as when operators and robotic systems work hand-in-hand, making fast and flexible product changeovers are possible. At the Efficiency Arena, a toy buggy was being produced for which the setup time was reduced from 5 to 3.5 hours, compared with a completely automated process. The human/machine interaction solution shown led to lower capital expenditure on the automation and, thanks to the reproducible processes, enhanced process reliability and productivity.

'Data Integration' was the theme of the third station, where it was demonstrated how parts-based online data acquisition 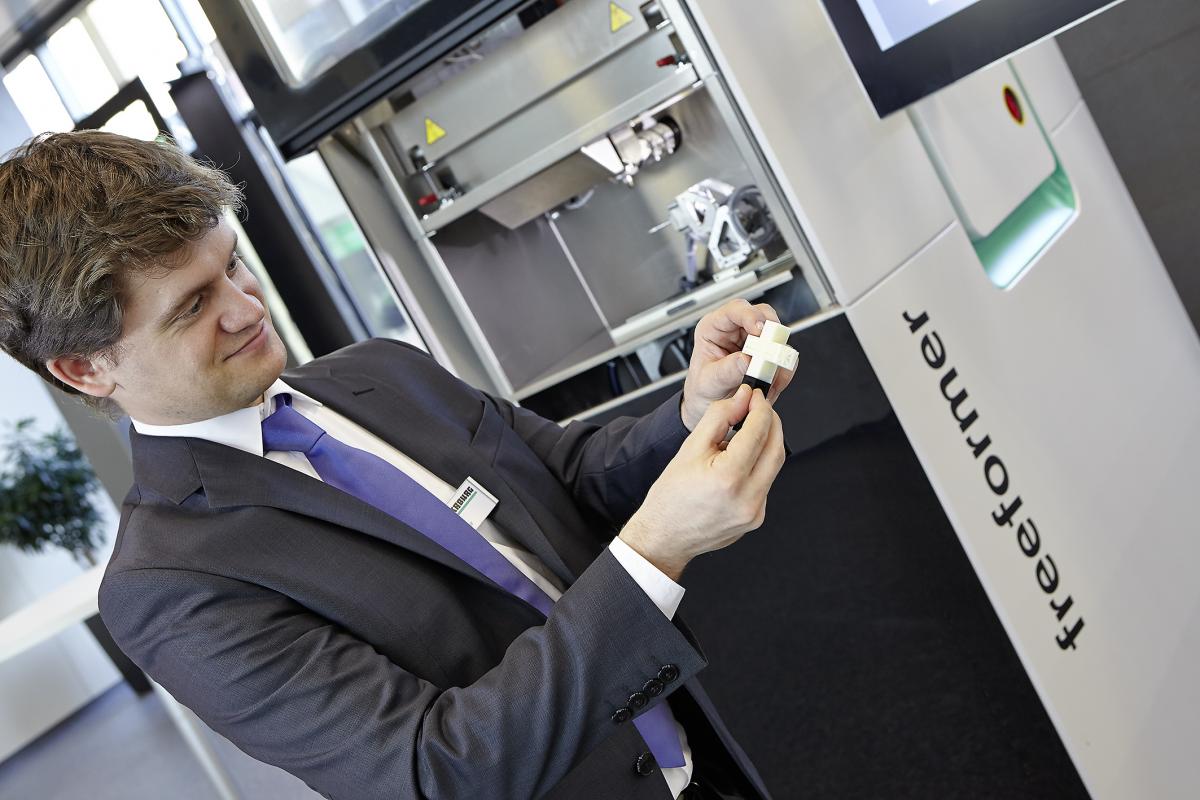 The fourth station focused on 'Speed' and the optimization of cycle times.

The last stop in the Efficiency Arena was the 'Productivity' station, where it was shown how a high-performance machine could increase the output of mass-produced articles. Modern drives reduce energy requirements and maximize reproducibility. An electric Allrounder 470 A machine displayed how dynamic and synchronized processes drastically reduce cycle times, producing 64 flat drippers for droplet irrigation, weighing 0.15 grams, in a cycle time of only 1.8 seconds, or 128,000 parts an hour. The delicate structure of the product required maximum precision of machine and mold. Near-contour mold cooling improved process stability. Sprueless operation saved material and reduced the cooling time.

Other highlights on display in the Customer Center during the event included an electric Allrounder 820 A featuring a new 4,000 kN toggle-type clamping unit and size 2100 electric injection unit, producing 48 teaspoons with a cycle time of around 5 seconds before being automatically packaged ready-for-use and marked with a QR code.

A two-component optics application was running on an Allrounder 520 A equipped with a multi-timed mold, which produced four lenses with a thickness of 25 millimeters in only 55 seconds. The mold rotated by increments of 45°, with injection, cooling and removal steps performed simultaneously at the eight stations, thus reducing cycle times several times over.

A stainless steel version, especially for cleanroom applications, of the electric Allrounder 370 A was producing syringe barrels made from the glass substitute COP.

A packaging model of a hybrid Allrounder Hidrive 570 H was molding thin-walled IML containers as a demonstration of how high productivity can be combined with lower energy, while a 200 g brake lever reinforced with organic sheet and long glass fibers put a servo-hydraulically driven Allrounder 820 S through its paces.

This year's Technology Days attracted some 6,900 visitors from 52 different countries. "That's nearly a quarter more than in the previous record year 2013," said Michael Hehl, managing partner and spokesperson for the Arburg nanagement team.

"Despite the huge numbers, what counts for us at this event is and remains quality rather than quantity," he declared.

Around 45 percent of the visitors travelled from abroad. The largest groups of visitors came from Europe, primarily from France (265 participants), Switzerland (260) and Poland (180). Very large groups from overseas included the U.S. (260 guests) and China (185).