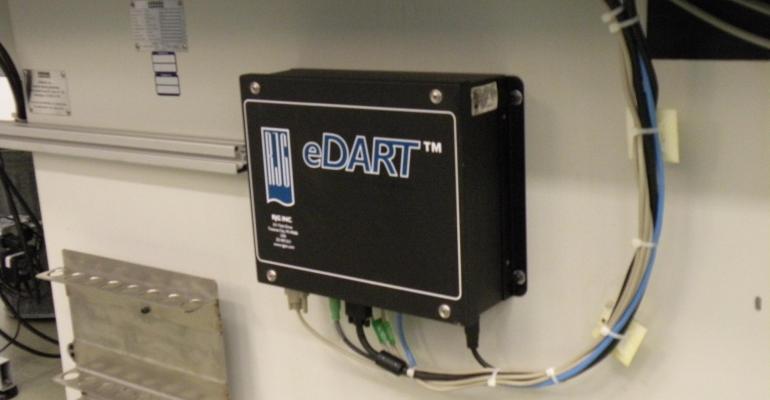 When Robert Gattshall, process engineer at Tech Group Michigan, ran the numbers, he realized his technicians didn't have a chance. The sheer number of data points they entered daily meant that even the most meticulous machine operator was destined for input errors—input errors that could jeopardize an entire shift's work.

"The problem with paperwork is, if you had a 12-hour shift, you finish your paper work 11-and-a-half hours after that person started the machine," Gattshall explains. "That's the point where you look and say, 'My goodness! We're at 20% scrap!' You don't know. Nobody will know until they complete their paperwork, and you take the bad parts and divide them by the good parts. That's when you know."

Out of that realization and by joining a production monitoring system with a process monitoring system, which will soon be fully integrated into the plant-wide ERP platform, Gattshall and The Tech Group's Rapids contract manufacturing facility hope they have created a poka-yoke plant with real-time transparency.

Culture shock
Coming to medical molding from the automotive industry, Gattshall describes his introduction to the documentation enforcement in his new sector as a "culture shock." It was this shock that initially set him and The Tech Group in  pursuit of a more automated real-time solution.

"You have to show that you ran everything in spec," Gattshall says of medical molding. "It's not as simple as taking a part, running it, measuring it, and saying it was good, because it could be, but if you don't have documentation to prove you ran it within the process specification that the customer approved, the part is not acceptable."

By Gattshall's calculations, technicians were filling out process monitor logs for each job, twice a shift, resulting in more than 4000 entries every month. If only six mistakes were made per month, that technician would have a data entry failure rate of only .15%.

"There's no job that we run, in any industry, that is as repeatable as that guy, that human, writing that down," Gattshall said, "but he still made a mistake, and those six mistakes could cost thousands and thousands of dollars. We had already changed the process monitor log format to make it easier, what can we do? You know what the best thing to do is? Don't do it anymore, right?"

Release the eDARTs
When Gattshall first started at The Tech Group's Grand Rapids injection molding and assembly facility, the plant had four of RJG's eDART process monitoring and control systems, although none were mounted to a machine. Instead, the monitors sat in blue cages and were used sparingly and mostly in process qualification. The Tech Group had embarked on an initiative with all their manufacturing plants to fully engage process monitoring. Standardizing on E-Darts was just on of the tools used to assist in the process. The Tech Group also had a dedicated Master Molder III on staff with over 20 years experience and black belt certified to support the global initiative.  Tech Group Michigan needed to embrace this initiative and Gattshall was given the task.

Starting with one press, Gattshall put the eDARTs into service, adding a touchscreen control as well as thermocouples in the oil heaters for the mold, allowing the system to monitor mold temperature in each half. By doing this, they could prevent set-up errors. Next, cavity pressure transducers were deployed, and using their tags, they were able to tell the eDART which mold was in which press, preventing any errors in mold installation.

In time, Tech Group would purchase another 35 eDARTs, mounting them all to injection molding machines. "It was a huge capital investment," Gattshall says. "Once we proved that it would work, we went all in."

Marrying process and production monitoring
With process monitoring in place, Gattshall and plant manager Kim Koning decided the next step would be the addition of a full-fledged production monitoring system. Potential vendors were reviewed, with a report compiled detailing the pros and cons of each. From that group UK firm, InTouch Monitoring, along with RJG, were brought in for meetings with the Tech Group.

InTouch stresses the possibility of customizing its system, which it bills as offering real-time production monitoring, reporting, and planning, and the Tech Group fully exploited the ability to tailor the software to its needs. Now, when technicians hit "start job" on the InTouch user interface, the system automatically populates all the information from the RJG eDART, including job number, material number, and all the other data points that technicians would enter. Gattshall says one of the next steps for The Tech Group will be the elimination of process monitor logs.

"We're going to have to come up with some kind of documentation for our job folders," Gattshall says, "and that's a process certification we're going to print out, which is new, I think, for the medical industry. It's going to change a lot of things."

Splitting the uprights
Utilizing the functionality of RJG's eDART, The Tech Group will further boost productivity and remove the opportunity for human error. Gattshall says eDART's inject enable and good part signal, working off process specifications supplied by the customer, will allow The Tech Group to deliver good parts to customers with confidence.

Every process has many variables that determine if the end result is acceptable or not. "The EDart system allows us to monitor key molding variables in every shot, as they occur. Once we've established key statistical process control limits, based on acceptable cosmetic and dimensional part requirements, we use the limits to determine acceptability of each molding cycle. If any of the key process variables violate the control limits, the shot is automatically diverted. Think of a football player kicking field goals. Would you want your kicker to always be wide left, wide right, or down the middle?  Utilizing the EDart gives us shot to shot visibility to ensure all parts we delivery to our customers are made right down the middle of the process," states Gattshall.

Ensuring good data
Tech Group Plant Manager Kim Koning's background is in Six Sigma and the reliable information flowing from the plant floor to himself and Gattshall was immediately appealing. "You have to have good data you can trust, to identify where your problems are," Koning says. "I've worked on a lot of projects where you've got what we call 'bootleg data,' so if you don't have good data, it's hard to know if you've made improvements."

During his time at automotive molder Cherry Automotive, Gattshall recalls early work with Shotscope, machine supplier Husky Injection Molding's integrated process/production monitoring system. "We started to see the potential there. Now integrate eDART with InTouch and, it finally comes together."

In the past, Gattshall would spend hours trying to calculate and enter machine absorption, trying to ascertain how many machine hours The Tech Group got from the operators on duty. Now, with the addition of bar-code scanners on the machines, technicians simply swipe their existing identification to log in and out, automating the once tedious absorption calculation. One example of many management steps The Tech Group is quickly figuring out ways to automate, with assembly up next for the InTouch treatment.

"When I was a technician on the floor, I couldn't think of anything better than seeing how my process was actually running. Looking at the cycle graph, seeing the injection pressure curves right next to the last shot that got scrapped. You know what I'm saying?" Gattshall says. "I knew that that exact pressure curve produced a bad part," he explains. "It's cutting-edge, there's no other word for it."