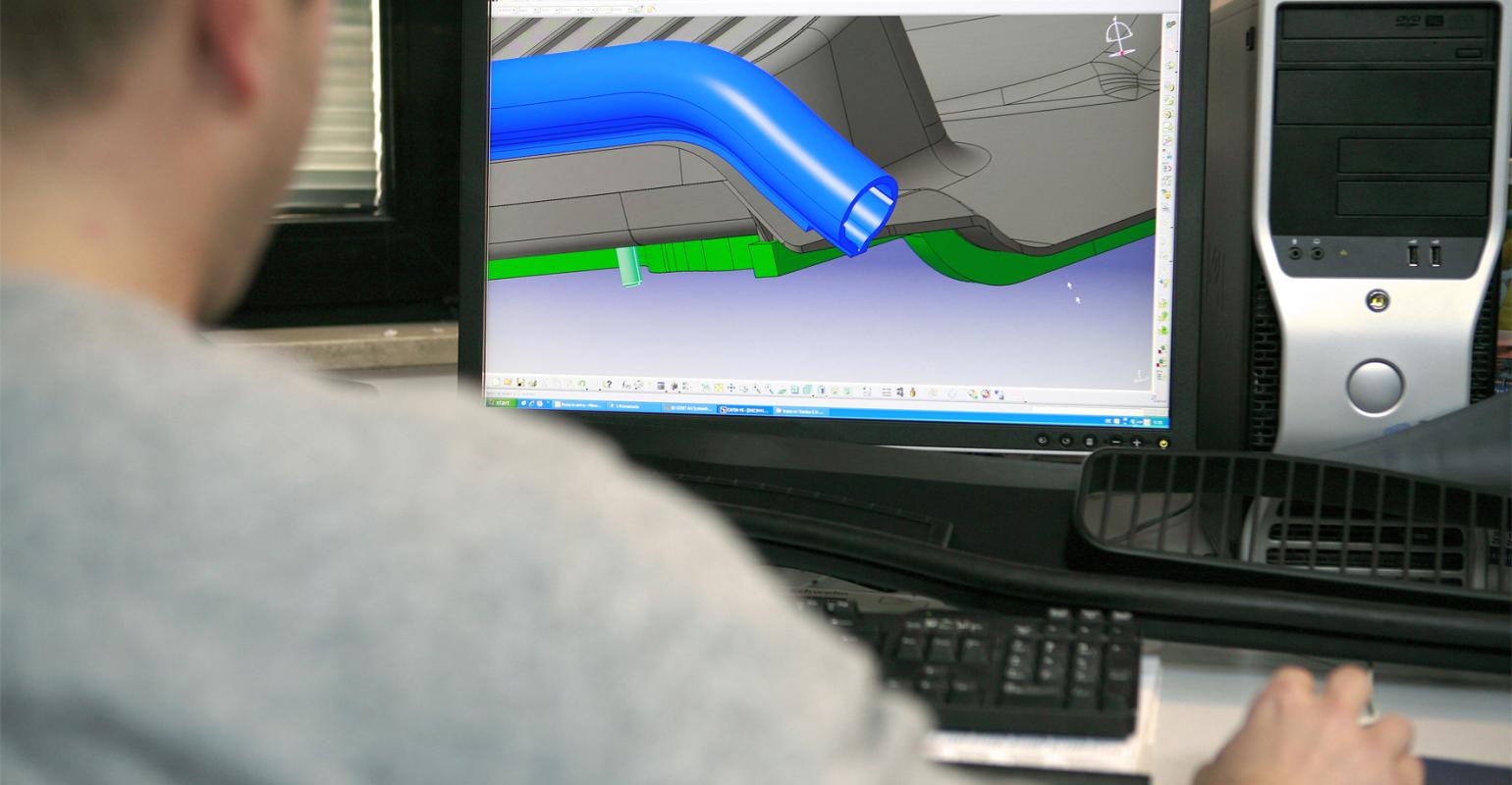 The projectile injection molding technology (PIT) developed by Röchling Automotive has been recognized and awarded by Society of Plastics Engineers (SPE) already for its use on parts made for BMW and Ford. Now the company is offering additional details on the process, especially regarding the size, complexity and performance of the co-injection molded seal, which replaces an extruded one attached in a secondary process.

The projectile injection molding technology (PIT) developed by Röchling Automotive has been recognized and awarded by Society of Plastics Engineers (SPE) already for its use on parts made for BMW and Ford. Now the company is offering additional details on the process, especially regarding the size, complexity and performance of the co-injection molded seal, which replaces an extruded one attached in a secondary process.

We've reported on PIT before, including on Röchling's victory last year at the Society of Plastics Engineers' Automotive Innovation Awards. Röchling (Mannheim) won for its work in molding a cowl grill for Ford's C-Max compact car that combined a hard polypropylene (PP) structure with a soft thermoplastic elastomer (TPE) seal into one part. The TPE portion, which creates a tight seal for the hood when closed, making for a quieter ride and reducing flutter, includes a channel running down its length with uniform wall thickness all around. The part took home the top prize in the body exterior category.

The processor recently shared results of another project which involved injection molding of a cowl grill / engine cover bulb seal, molded in a one-shot process, with parts exiting the mold ready for shipment to the customer. The two-component process saves about 30% weight and 10% costs compared to the previously used assembly of the two components, while also lowering the rate of quality problems. "The two-component PIT-cowl grill eliminates assembly and quality costs. Instead of higher parts costs the bottom line shows savings of 10%," says Matteo Piazzi, product manager at Röchling Automotive. "Material and weight savings of 30% come on top. Rising raw material costs thus improve our competitiveness further." In this case, EPDM was the sealant material, not TPE, with the carrier again molded from polypropylene.

According to Röchling, its PIT process is faster than gas injection, and can form parts with lower weight. Versus water injection, says Röchling, PIT creates parts with a better surface structure (fewer voids or pits). The P in PIT is a winged polyamide projectile shot through a partially filled cavity, propelled by inert gas at pressures ranging from 200-300 Bar so that a hollow part (such as a seal) with uniform walls is created. The projectile is not recovered but Röchling has created a system to recapture the melt that is forced through the cavity, and feeds this melt into a future shot.

On the new cowl grill / engine cover project, the molded carrier and the hollow elastomer seal had been made separately, with the PP carrier injection molded and the EPDM seal extruded, and then assembled together in a separate process. The seal can be manufactured in lengths of up to 1.5 m with constant wall thickness and complex 3D shapes, says Röchling. The wall thickness can be varied to suit different sealing or force requirements along the length of the seal; this has advantages for pedestrian protection and hood flutter avoidance.

The molded seal can follow tighter radii than an extruded seal, claims the processor. The seal compensates for vehicle tolerances of up to 10mm in line with closing pressure. The seal can be made longer, shorter or equal to the length of the carrier. It can also comprise T- or V-shaped junctions.

After the hard component of the cowl grille (the carrier) is molded, a slider in the mold opens to allow the seal cavity to be filled with elastomer material. The projectile then forces the majority of the still-liquid EPDM out. The ejected material is recycled for use in the next cycle, and the warm carrier chemically bonds with the seal.

Last month the Röchling Group released financial figures for its first quarter of this year and its outlook for the rest of 2011. "We are in the midst of a growth spurt," said Georg Duffner, CEO, explaining the good start to 2011. "The Röchling Group is benefiting from strong demand, particularly in China and other newly industrializing countries. In order to continue to benefit from opportunities, the topic of international expansion has highest priority." This year the Group opened its fifth plant in China, and its seventh manufacturing facility in the U.S. (our report here). The Röchling Group is currently building an additional facility in Pitesti, Romania. "Whereas the Röchling Group still generated 67% of its sales in Germany ten years ago, we expect to derive two-thirds of our sales from other countries in 2014," commented Duffner.

The company increased sales in the first quarter by 22.8% to a total of €293.9 million (same period 2010: € 239.4 million). It also posted a 22.2% growth in incoming orders to €313.8 million (€256.7 million in Q1 2010). In the Automotive Plastics division, sales improved from the previous year's quarter by 14.6%, and in the High-Performance Plastics division they rose by about 30.9%. It's High-Performance Plastics division markets semi-finished products such as sheets, rods, profiles from thermoplastics and composite materials, and also molded and CNC machined finished components.