At NPE2012, Dennis Paradise, senior VP of sales for Processing Technologies International (PTi), told PlasticsToday the first quarter of 2012 was the "largest in company history" and that PTi "has a pipeline that's literally busting with real projects." PTi recently announced the sale of its "dryer-less" twin-screw sheet extrusion production system to Site Plasticos, a Mexican thermoformer based in Guadalajara.

At NPE2012, Dennis Paradise, senior VP of sales for Processing Technologies International (PTi), told PlasticsToday the first quarter of 2012 was the "largest in company history" and that PTi "has a pipeline that's literally busting with real projects."

PTi recently announced the sale of its "dryer-less" twin-screw sheet extrusion production system to Site Plasticos, a Mexican thermoformer based in Guadalajara.

Site Plasticos will use the sheet extrusion system to produce roll stock made of RPET (both consumer and industrial recycle) for thermoformed containers for fruit and produce. PTi will play a key role as a supplier of additional dryer-less machines as the Mexican manufacturer looks to double its production capacity at the Guadalajara facility over the next three years, the company stated.

Site Plasticos was among several OEMs and processors who attended PTi's live customer demonstration on May 1 at the company's Aurora, IL headquarters. PTi stated the company received strong interest from attendees at the NPE2012 plastics exposition (April 1-5; Orlando, FL), which spilled over to the subsequent live demonstration.

At the demonstration, PTi ran several trials of the High-Vacuum Twin-Screw Extruder (HVTSE) technology running PET virgin, flake, and RPET bottle flake material. As a result, PTi expects to close on additional sales opportunities in the near future, according to Paradise.

This extrusion system is the only full-scale "dryer-less" twin-screw sheet extrusion demonstration system available for trials in North America, according to the company.

PTi recently announced a $3 million plant expansion at its headquarters in response to growing demand for its sheet extrusion equipment.

The company plans to increase overall plant capacity by 50% by adding 40,000 sq-ft of primary manufacturing and office space and will boost staff by about 20-25%, adding manufacturing, engineering, and some sales positions. 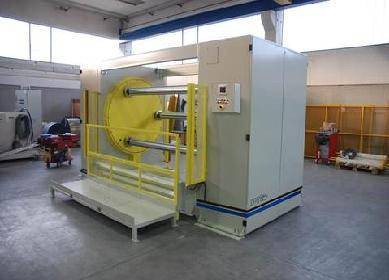 The production-scale unit, which is capable of processing rates in excess of 2000 lb per hour (900 kg/hr), runs a variety of resins including post-consumer and industrial PET/PLA.

The process relies on Italy's Luigi Bandera's patented High-Vacuum Twin-Screw Extruder (HVTSE) technology, which allows PET to be processed without the need for raw material drying and crystallizing. It employs a single atmospheric and dual high-vacuum, vent system with a co-rotating twin-screw extruder. This approach allows moisture and other volatiles to be removed as part of the extrusion process.

"Flexibility has been the biggest advantage and selling point in North America," Paradise said. "It allows processors to respond to market changes very quickly, especially resin prices. Also, a lot of customers want to run PLA, they need flexibility, but can't have a dedicated PLA line."

The company touts one of its biggest advantages as being energy-efficiency. The twin-screw saves about 35% energy over single screw, Paradise said.

"Twin-screws can run multiple materials on the same line with a fast changeover time, as little as 30 minutes," he said.

PTi has a strategic business alliance with Bandera to exclusively market the technology in North America. The demonstration line is available to sheet manufacturers for product evaluation using their own virgin and recycled materials.

Customers have the ability to run production-scale trials instead of scaling up from a small lab-scale pilot line that can often result in inaccurate estimations and unfavorable results, according to PTi.