Among the 50 debuts out of the hundreds of vehicles showcased at the recent Detroit auto show, Radici Group (Gandino, Italy) noticed a "glaring contradiction of the American auto industry." The contradiction, it said, was in the juxtaposition of environmental friendliness, advanced technology and innovation against "the typical American passion for big-sized cars with very little hint of green."

Among the 50 debuts out of the hundreds of vehicles showcased at the recent Detroit auto show, Radici Group (Gandino, Italy) noticed a "glaring contradiction of the American auto industry." The contradiction, it said, was in the juxtaposition of environmental friendliness, advanced technology and innovation against "the typical American passion for big-sized cars with very little hint of green." 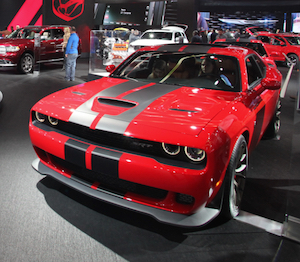 As I read on through that first paragraph in the Radici Group's press release, I wasn't sure if they were happy about Americans' passion for big, fast cars or resented the fact that we're not all driving Smart Cars. They did recognize that "this contradiction is shared by all the market players." So we're an equal opportunity country in our taste for these vehicles, no matter which OEM makes them.

Radici provided a market report that noted "despite the challenges the electric and hybrid car sector is up against—in 2015, the share of battery-powered vehicles in the United States decreased to 2.4%, a 20% drop compared with 2014—there are numerous hybrid cars showcased at this year's auto show in America's motor town.

"After the taste of new technologies given to visitors at the Consumer Electronics Show in Las Vegas [earlier this month]—from battery-powered cars that can go more than 300 kilometers on a single charge to fully autonomous self-driving cars—the automakers of alternative propulsion vehicles are back in the spotlight at the Detroit auto show," said Radici.

"For us, the North American auto market is the number one market in terms of volume," said Gianluigi Molteni, head of marketing and business development at Radici Plastics Americas & Pacific. "In 2015, we had double-digit growth versus the previous year, and our development pipeline is strong. We have aligned our product portfolio with automakers' and suppliers' requirements and standards, which are becoming more and more stringent in terms of fuel economy and environmental protection."

As the outlook for vehicle sales in North America stays positive, so does the outlook for growth at Radici Plastics. However, the North American auto market depends on China, the South American countries and Russia, and is thus exposed to possible negative effects arising from economic and social events in those countries. Caution and close monitoring of the situation are essential."

Certainly, global economic events are having some negative effects, as we watch China's GDP slide into uncertainty. U.S.-based auto makers that manufacture in China for the Chinese consumer might start to feel the pinch, as the Chinese take a wait-and-see attitude in terms of their spending. However, I'm not certain just how much impact South America and Russia will have on the North American automotive market. Mexico's automotive manufacturing sector continues to expand rapidly and shows no signs of slowing.

Radici's release also showcases the company's under-the-hood components molded in the company's newest engineering thermoplastics, such as the Radilon HHR nylon 6.6 engineering resins with high-heat aging resistance at temperatures up to 210° C. The material is suitable for both injection and blowmolding applications in 15%, 20% and 35% glass-fiber filled versions. The new Radilon XTreme line offers materials developed for hot-air applications at continuous operating temperatures up to 230° C.

Radistrong materials are available in nylon 6 and 6.6 versions, and are "ideal for metal replacement in critical applications, where high performance not attainable by traditional engineering plastics is required." The new Radistrong long-fiber specialties are manufactured by the pultrusion process and are available with carbon-fiber fill ranging from 20% to 60%.

Radici Plastics also has biomaterials for injection and extrusion molding produced from PA6.10, a biopolymer obtained from sebacic acid (64% by weight), which comes from the castor oil plant. Because the plant grows in semi-arid regions, this does not compete with agricultural food products. "Compared to PA6 and PA6.6, Radilon D polyamides show reduced moisture uptake, reduced loss of tensile strength and tensile modulus under wet conditions, better chemical resistance to zinc chloride and calcium chloride, and improved glycol resistance," said Molteni.

I'm not sure how disconcerting America's "glaring contradiction," as observed by RadiciGroup, really is, given the fact that the company supplies the U.S. automotive industry with innovative materials. Obviously they can't be too concerned about our "passion" for large-sized pickup trucks (which remain hugely popular nationwide), and the latest generation of much-favored "muscle cars," which means a lot of polymer materials being purchased to meet the needs of the North American auto industry.

Perhaps the real contradiction is in whether or not "green" cars can be really all that "green."