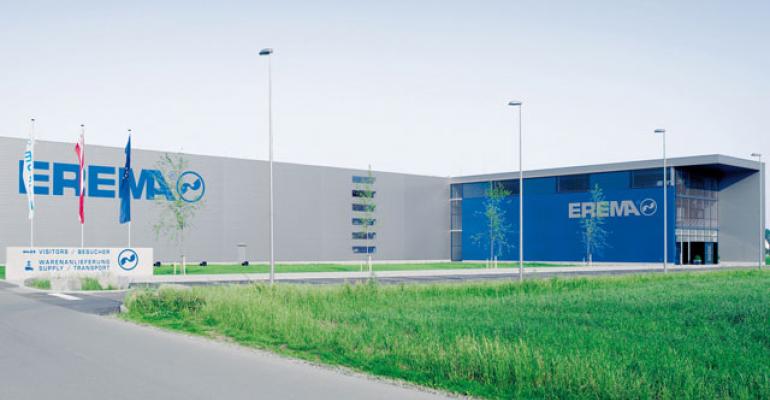 As the costs of virgin material remain consistently high, it’s no wonder that recycling equipment manufacturers are expanding and innovating, and, in one case, doing better than ever. Austria-based Erema, the global leader in the market for the development and production of plastic recycling systems and components, achieved a record turnover of €115 million from April 2011 to March 2012, recording its best fiscal year of all time and a 40% increase over the previous year.

As the costs of virgin material remain consistently high, it’s no wonder that recycling equipment manufacturers are expanding and innovating, and, in one case, doing better than ever. Austria-based Erema, the global leader in the market for the development and production of plastic recycling systems and components, achieved a record turnover of €115 million from April 2011 to March 2012, recording its best fiscal year of all time and a 40% increase over the previous year. Moreover, this result was an incredible 25% up on the former record year of 2007/08—prior to the economic crisis.

At PLAST, in Milan, Erema was touting an innovation described as “two companies—one idea.” Called Corema, it involves a joint development from Erema and German compounding and extrusion giant Coperion, and combines the strengths of both companies into a single recycling and compounding system adding, as was pointed out in the leaflet handed out at the stand, “new opportunities along the value-added chain.”

The Erema recycling system uses a multi-purpose cutting/compacting unit and durable single-screw extruder, which processes the melt through the filtration system. The filtered melt is then directly fed into the co-rotating, self-cleaning twin-screw extruder from Coperion, which is equipped with a degassing unit. The single-step melting concept and short, defined residence time minimizes shearing impact. The direct feeding of high-quality melt from a single screw results in very low energy costs. Filling, blending, and reinforcing occurs in a single-step process.

A spokesperson at the Erema booth was emphatic about the benefits of the system: “The two-in-one system offers a high-quality regranulation system that yields a very high-value final product using low-priced raw material as input. We think it’s a really big step forward, and one that can mean a lot of savings.“

NGR
With the introduction of the redesigned L:Gran recycling line at the stand in Milan, another Austrian manufacturer of plastics recycling machinery, Next Generation Recyclingmaschinen GmbH (NGR), was showing off a fully re-engineered “light version” of the company’s S:GRAN system that is suitable for in-house postindustrial scrap applications. Like its big brother, the L:Gran machine features NGR’s patented one-step cutter-feeder-extruder technology, which combines a single-shaft cutter and screw extruder in one unit, eliminating the need for pre-cutting and densification of the material. The material is fed directly into the extruder without losing the frictional heat generated during the cutting process, which guarantees a high quality of recycled pellets with minimal loss of physical characteristics. Reprocessing costs are low, and the “dump-and-run” mode makes it possible to run the machines with intermittent operator attention and still get consistently high output rates.

In redesigning the L:Gran, the shredder has become more easily accessible for faster cleanouts and faster material changeovers. The recycling lines are fully automated, and now feature “single-button” start-ups and shutdowns, eliminating problems with restarts with a full hopper and extruder screw. The design of the machine, which is extremely cost-efficient for in-line and off-line applications, is compact and robust. The combination of low power consumption, small footprint, low operating costs, and low manpower requirements, plus a pellet output rate of up to 230 kg/hr, make the L:Gran an economical choice for reprocessing film edge trims, fill rolls, or loose material.

Tecnova
At the stand of recycling equipment maker Tecnova, the company’s Refil/1 in-line system for reclaiming film scrap was being shown. Production rates of the system, which can handle a wide range of materials, including biopolymers, are claimed to be 40-45kg/hr.

Also on view was the company's Mini 60 line, which the company says is able to process bioplastic, in addition to LDPE/HDPE/PP film. The line is equipped with a special grinder, a die-face cutter, and a cooling system, all specifically designed to be able to handle biopolymers as well as conventional plastics. The regenerated granules can be directly re-introduced into the extrusion process for the production of (biodegradable) film.