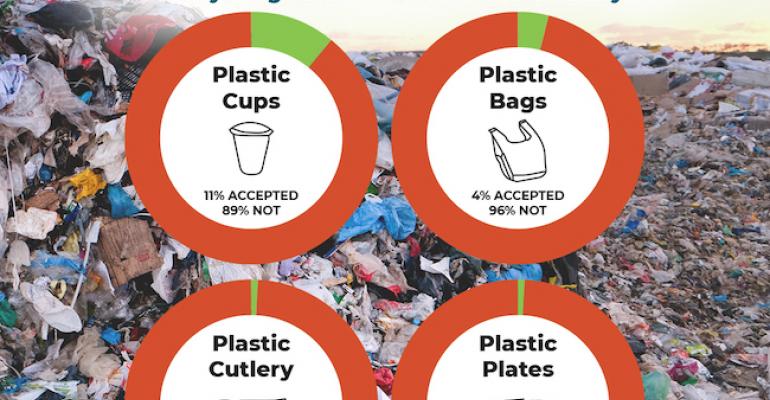 The results of the Greenpeace USA survey pretty much tell us what we in the plastics industry have known for a couple of decades: The number scheme for seven different types of plastics continues to be a thorn in our collective side.

I’ll bet you never expected to read this in one of my blog posts, but here goes: Greenpeace makes some valid points in its latest comprehensive survey of the nation’s 367 material recovery facilities (MRFs). Greenpeace USA released the results of the survey last week, and they pretty much tell us what we in the plastics industry have known for a couple of decades: The number scheme for seven different types of plastics continues to be a thorn in our collective side.

As it was explained to me a few months back by an industry colleague, the numbers on the various plastics used for packaging and single-use items such as cups, drinkware, take-out food containers, and utensils, are there to identify the type of material the item is made from. The numbers do not indicate the recyclability of the items. I think a lot of consumers remain confused about that. PET #1 (water and soda bottles, etc.) and high-density polyethylene (HDPE) #2 (milk and juice jugs, etc.) are the most recyclable of the seven numbers.

Low-density polyethylene (LDPE) film, used in retail T-shirt bags, bread wrappers, paper towel wrappers, and so forth, are currently being collected through in-store recycling bins, which seems to be a pretty successful method if the full-to-overflowing bins I see in the stores where I shop are any indication. But it is still a work in process . . . and in progress.

While progress is being made in the collection and recycling of PET and HDPE and, to some extent, LDPE, it’s not good enough or fast enough for the people at Greenpeace USA. They may have a point. The survey Greenpeace conducted found that common plastic pollution items, including plastic tubs, cups, lids, plates, and trays, may not be labeled as recyclable according to Federal Trade Commission (FTC) requirements for products and labeling. Additionally, many full-body shrink sleeves that are added to PET #1 and HDPE #2 bottles and jugs make those products non-recyclable, as well.

“This survey confirms what many news reports have indicated since China restricted plastic waste imports two years ago—recycling facilities across the country are not able to sort, sell, and reprocess much of the plastic that companies produce,” said Jan Dell, independent engineer and founder of The Last Beach Cleanup, who led the survey of plastics acceptance policies at the 367 MRFs.

Those of us in the plastics industry have known that for three decades. It’s not just sorting the various types of plastics that is so insanely difficult; it’s sorting all the plastics from the paper, metals, glass (much of it broken), textiles and myriad other things (including a pet python) that get thrown into recycle bins that wreak havoc on the MRFs.

Who in their right mind thought that throwing multiple types of materials into a single container would be simple? Hiring dozens of people to stand next to fast-moving conveyor belts trying to grab the right stuff off the line so it can be relegated to the next level of the process is even crazier.

Greenpeace also takes issue with labeling. It identified numerous examples of companies such as Target, Nestlé, Danone, Walmart, Procter & Gamble, Aldi, SC Johnson, and Unilever using misleading labels. Greenpeace has asked these companies to correct their labels. Some changes are underway, said Greenpeace, but it plans to file formal FTC complaints if the change doesn’t happen.

I have to admit that I agree with Greenpeace on this issue. What is the point of saying that a plastic item is “compostable” when it is not? It may compost somewhere, in an industrial composting facility, perhaps, if you can find one that will take so-called “compostable” plastic items. Most municipalities do not have a separate bin for curbside pickup of compostables of any type, much less plastic. The same goes for biodegradable, which is why products in California cannot say “biodegradable” on them. Yes, they will biodegrade in a year or 10 years as long as they are left out in the open environment. And no, that’s not better than 1,000 years, as I once read.

So to all those brand owners who are putting “compost me” on their various plastic items, or sticking a “biodegradable” label on a product, which means it’s okay if it’s left on the beach or along the roadside because it will soon go away, please stop! What you’re doing is “greenwashing.” You’re making things worse, not better!

The Greenpeace survey revealed that many MRFs only accept two types of post-consumer plastic items—PET #1 and HDPE #2 bottles and jugs—because the items have sufficient market demand and domestic processing capacity. Maybe that’s all they should accept. If the #3 to #7 plastic items cannot be labeled as recyclable because they have “low acceptance by MRFs, minimal to negative material value, and negligible processing capacity in the U.S.,” then perhaps we need to question why we’re even throwing these items into the recycling stream in the first place.

Some plastic items—not just those for recycling but for composting and biodegradability, as well—say to check locally on the instruction label. So the average consumer is supposed to get online, look for the nearest composting facility, call them and ask about the compostability of a plastic item, or call the MRF and ask which types of plastics they sort out for recycling and which go to the landfill? If we have #3 to #7 going to the landfill or incinerator, then why are we even putting these items in the blue bins? (I’m actually not opposed to incinerating #3 to #7 plastic along with other burnable waste, and have encouraged it in many of my blogs.)

“Retailers and consumer goods companies across the country are frequently putting labels on their products that mislead the public and harm America’s recycling systems,” said Greenpeace USA Oceans Campaign Director John Hocevar. “Instead of getting serious about moving away from single-use plastic, corporations are hiding behind the pretense that their throwaway packaging is recyclable. We know that this is untrue. The jig is up.”

Tony Radoszewski, President and CEO of PLASTICS, released a statement taking issue with Greenpeace USA’s report, saying that it is “part of a targeted campaign against the nearly one million Americans employed by the plastics industry. Instead of seeking actual solutions, Greenpeace chooses to release sensationalist ‘studies’ that do nothing to address the real issue.”

I have to say that this recent study and report was one of the more sensible I’ve read from Greenpeace. I was impressed by the thoroughness of the research.

“There is a lack of sufficient recycling infrastructure for all materials in the U.S. and this must be addressed,” said Radoszewski.

Many materials are being declined at MRFs, such as newspapers because they are drowning in them. Aluminum seems to be the material that has one of the highest recycling rates. I’ve read reports that many recycling facilities for PET and HDPE have quite low utilization rates and could certainly use more of those two types of plastic.

Radoszewski goes on to talk about life-cycle analyses that show “plastics are more environmentally beneficial than alternative materials,” and even more so when they are successfully recycled into new materials. But, before that happens there have to be better ways to capture more of the plastics and get it to where the value can be realized, whether that is through mechanical recycling of the most in-demand polymers (PET and HDPE) or chemical recycling of those materials that fall outside the boundaries of mechanical recycling.

“We take issue with the report for many reasons, and there is already an ongoing industry-wide dialogue about how the recycling system is performing today and how it could perform with an updated infrastructure,” Radoszewski said.

The Greenpeace report states that most types of plastic packaging are economically impractical to recycle and are likely to remain so for the foreseeable future. For that reason, developing technology is critical to this issue, especially when it comes to sorting. There are a number of companies that have developed automated systems that can sort various plastics via electronic sensors, a boon to MRFs everywhere. A lot of headway also is being made by companies with “compatibilizers,” additive compounds that make various types of plastics “like” each other so that they can be processed. Chemical recycling is also making strides, turning difficult-to-recycle plastics into valuable polymers.

Until all of these technologies become widely used, we’ll continue to see more “greenwashing” via labels that mislead consumers into thinking the plastic items they have in their hands will somehow just disappear.

While Greenpeace ends its report by urging “U.S. retailers and consumer goods companies to eliminate single-use consumer plastic, and to invest in reusable, refillable, and package-free approaches,” we, as consumers and industry people, can think of a million reasons why this approach is impractical and filled with unintended consequences.

Ultimately, until we can educate consumers about the value of plastics and teach them to care enough about the environment that they will put all their waste—not just plastic—into the proper bins for recycling, landfilling or incinerating, we will always have a litter/waste problem. It’s not just a plastic problem—it’s a people problem, as well. Let’s face it, there’s plenty of blame to go around.