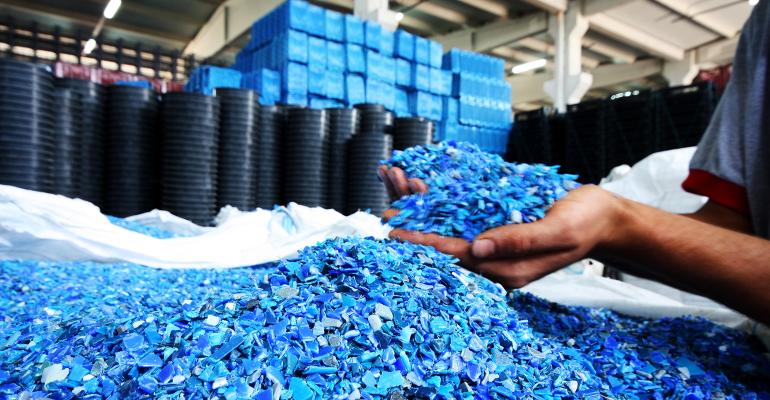 PE exports were firmly above two billion pounds for the first time ever in December and began approaching 50% of all PE sales.

Resin trading typically experiences an upswing to start the year, but January so far has defied tradition. Spot resin trading remained surprisingly slow and demand was rather uninspired, reports the PlasticsExchange in its Market Update. At least that was the case domestically; exporters saw robust sales this month.

Domestic polyethylene (PE) prices held steady while polypropylene (PP) marched another two cents higher, pushed by the rapidly rising cost of polymer-grade propylene (PGP) monomer. Fresh resin offers remained squeezed by significantly reduced operating rates over the past four months, including some December weather-related production disruptions, heavy exports to China, and strong sales to Latin America. Asian demand dropped off ahead of the Lunar New Year, which will run for about two weeks. Despite the weakening US dollar, which aids exports, European demand for US resin has been slowed by poor consumer demand and competitive offers from the Middle East.

Last week’s PE trading activity was deemed below average by the PlasticsExchange. The market began the year with strong undercurrents amid tight supplies and a flurry of buying, said the Chicago-based resin clearinghouse, but processor enthusiasm has since faded. PE prices, both prime and off grade, firmly held on to their $0.02 to 0.03/lb gains garnered earlier in the month, but did not add to them this past week.

The flow of railcar offers has been exceptionally light since early December and producers have generally refrained from showing any prime material to the spot market in January. Even off-grade railcar offers have only trickled in these past few weeks, as the export market seemed to soak up most of the material. Producers essentially sold out of their allotted export resin early in the month, although some material has been available from export inventories.

More PE data emerged during the week and revealed a fifth consecutive monthly draw from domestic stockpiles, with a total reduction of more than 1.1 billion pounds. This resulted from a significant decline in domestic production and record exports. Despite a fourth straight month of dismal domestic sales, producers’ collective PE stockpiles began January at their lowest level since October 2021.

December PE exports smashed all-time records, running 23% above the trailing 12-month average. It was the first time PE exports were firmly above two billion pounds and began approaching 50% of all PE sales, more than twice the pace seen five years ago and prior. The PlasticsExchange encourages readers to subscribe to the American Chemistry Council (ACC) for full data sets and actual figures.

PE prices may have been flat for the week, but tighter market conditions have shifted pricing power back into the hands of producers. With two force majeures still in place, specific grades are becoming elusive, especially high-density (HD) PE, which was by far the most active and sought-after grade on the PlasticsExchange platform last week. Lesser volumes of low-density (LD) and liner-low-density (LLD) PE, both film and injection grades, also changed hands, said the resin clearinghouse.

The drawdown in the industry’s PE and PP inventories and the reduction in reactor run rates have put producers in a better position to push for January and February price initiatives, which have the added support from feedstock monomer markets, especially PGP, which continued to spiral higher amid reduced monomer output. As the US domestic market now heads into the heart of January contract negotiations, it will be interesting to see whether PE producers will be able to secure any of their $0.05 to 0.07/lb increase. Some have already relaxed to a nickel, with as much as another nickel already nominated for February. PP contracts probably will see a dime or more cost-push increase implemented, and there is also a $0.03/lb margin-enhancing increase on the table, reports the PlasticsExchange.

PGP prices up 100% since mid-October

Spot PP trading was mostly disappointing the week of Jan. 16. The PlasticsExchange said it transacted Prime homo- and co-polymer PP with some scattered off-grade sales. Prices gained another $0.02/lb, bringing the January total to $0.08/lb. The price rise might seem like a lot, but it pales in comparison to the sharp and steep runup seen in spot propylene monomer costs. Spot PGP advanced another $0.10/lb this week alone; that’s a total of $0.19/lb since 2023 began, and a whopping 100% since mid-October, when spot PGP bottomed out at just $0.25/lb. However, poor processor demand has limited the rise in spot PP levels, and while steep prices have been asked by suppliers, few processors have been willing to pay up, placing a squeeze on spot resin margins.

This will create a challenge for producers to push through their proposed $0.03/lb margin-enhancing increase this month, despite their efforts to rebalance supply/demand by running reactors less than 70% on average in the fourth quarter, which resulted in a nearly 250 million pound PP inventory draw.

Still, January PP contracts will endure a huge cost-push-led price increase that should land somewhere between $0.10 and 0.15/lb. As long as PGP prices remain elevated, a more mild settlement in January could support demand and keep upward pressure on pricing by leaving some of the increase out there for February. It will be very interesting to see what demand looks like as we get closer to the end of the month, writes the PlasticsExchange. It should spur better spot activity, as spot resin is currently priced below the probable cost of contract resin this month, which is a very strange occurrence in a rising market.

While supplies have tightened, some sellers do have material on hand, but they are playing it close to the hip and not showing many offers as replacement costs escalate and amid slower business conditions. The longevity and magnitude of this rally could hinge on monomer producers’ ability to bring back offline propane dehydrogenation (PDH) production units and consistently produce more monomer balanced against PP producers reduced reactor rate discipline. Of course, ultimate consumer demand also comes into play and will help determine whether or not processors will finally whip out their purchase order pads.