The foundation to any robust process, in my opinion, is based on choosing the correct fill time. If you are familiar with any form of scientific injection molding, regardless of the name, then you know one of the first steps is performing a viscosity curve study. A viscosity curve is developed using calculations of the fill time and plastic pressure at transfer, at multiple injection speed settings.

The foundation to any robust process, in my opinion, is based on choosing the correct fill time. If you are familiar with any form of scientific injection molding, regardless of the name, then you know one of the first steps is performing a viscosity curve study. A viscosity curve is developed using calculations of the fill time and plastic pressure at transfer, at multiple injection speed settings.

This study should be completed with zero hold pressure and the parts should be filling to about 95%. (Remember visual shorts.) I recommend starting at the fastest injection speed possible and repeating at lower fill speeds until a minimum of 12 data points is collected. Make sure you cover the spectrum as far as injection speeds are concerned; slow injection speeds are just as important during this study as faster speeds.

So, once you have completed the viscosity curve study the next step is choosing a fill time from the curve...right?

Some people say the "rule of thumb" is to choose somewhere in the flat area of the curve. I am really not a "rule of thumb" kind of guy and prefer to back up my choice with as much data as possible. Considering that there are probably several injection speeds that fall within the flat section of the curve, additional data will be required. You have to ensure that the machine is repeatable at the fill time chosen. To do this, the processor will need more than just a viscosity curve.

Set speeds vs. actual speeds
Velocity linearity is a study of set injection speeds versus actual injection speeds. The processor will want to stay away from injection speed settings that are significantly off what the machine is actually capable of. This can cause extreme fill-time variation. "Significant" could be defined as the actual fill speed flattening out over several data points, as shown in the example below. The example below should be a giant stop sign for your process development. If a processor is faced with this, the root cause must be identified and corrected before process development can begin. 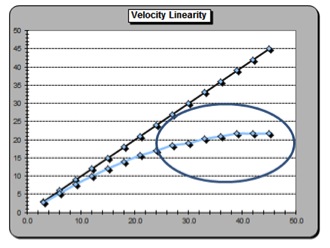 Example: Setting a machine at 5 inches/sec will not instantly propel the injection speed to 5 inches/sec. It takes the machine time to get up to speed, and depending on the shot size, it may take the entire shot to get there.

Imagine when you jump in your car and hit the gas, you're not instantly traveling 70 MPH. It takes time to get there, and if you are only traveling 20 feet, you'd never reach that speed. An injection molding machine does not have the ability to break the laws of physics, unfortunately, so it also needs time to ramp up to your machine setting.

Properly sized injection units
This is one of the reasons why it is extremely important to size your injection units properly. Optimal is 20% to 60% utilization of the barrel. This will ensure you don't use too little or too much of the barrel. Some machine manufactures control the ramp-up time, which ultimately controls acceleration of injection. This can cause the machine to take even longer to ramp up to the set injection speed, so sizing your barrel properly becomes even more important and is why I recommend the higher end of our optimal range.

The next step before choosing a fill time is knowing the repeatability of the fill time on your machine. We want the fill time to always fall within the flat of the viscosity curve even as it fluctuates. Use the slowest possible fill time within the flat section of the viscosity curve and allow the machine to run for a full 8 hours and collect the data. (This study is not required for each process developed, if data already exist showing fill-time repeatability that will suffice.)

If your machine's fill time is varying over 0.04 second, and you are not pressure limited, then you should have it checked out. A world-class injection molding machine will be able to hold tolerances within +/- 0.02 second. Now that the processor knows how much variation the fill time may see throughout a run, the chosen fill time must allow for this variation.

Viscosity, velocity, and fill
The processor now has three studies to assist in identifying an optimal fill time; the viscosity curve, the velocity linearity study, and the machine's fill-time repeatability study. The last factor I look at before deciding on a fill time is wasted energy, meaning that once the viscosity curve flattens and the optimal molecular orientation is identified, why do we need to inject any faster than that?

We really don't. Doing so is just wasting energy and could cause burning, material degradation or a number of other defects. So, after the three studies are complete, and if the processor still has several points to choose from, he should choose the slowest point available, being careful that it's beyond the point of decay, which is the start of arc, and also must account for any machine variation. 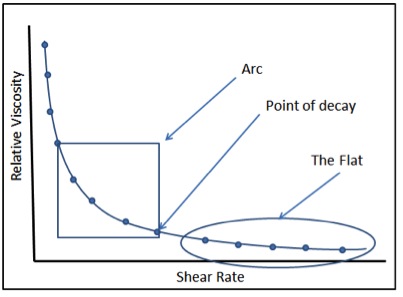 Pushing the material any faster doesn't offer any other benefits to the processor. It is just wasted energy. I understand that most of us have learned that faster is always better, and in some ways this is true. But faster in this case refers to ensuring that our fill time falls within the flat section of the curve, which is typically much faster than processors have filled parts in the past. Understanding all the tools for choosing an optimal fill time is fundamental to a robust, repeatable injection molding process.