Safety pays for everyone, including one lucky Meredith-Springfield employee

On Monday, Feb. 13 Meredith-Springfield Associates Inc., an extrusion blowmolding company in Ludlow, MA, held a drawing that rewarded one of its employees with a trip to the Bahamas in celebration of two years without a lost-time accident. Scott P. Hirsh, a machine maintenance technician from Three Rivers, MA, had his name drawn for the all-expenses-paid trip to the Atlantis Resort on Paradise Island worth $10,000.

On Monday, Feb. 13 Meredith-Springfield Associates Inc., an extrusion blowmolding company in Ludlow, MA, held a drawing that rewarded one of its employees with a trip to the Bahamas in celebration of two years without a lost-time accident. Scott P. Hirsh, a machine maintenance technician from Three Rivers, MA, had his name drawn for the all-expenses-paid trip to the Atlantis Resort on Paradise Island worth $10,000. 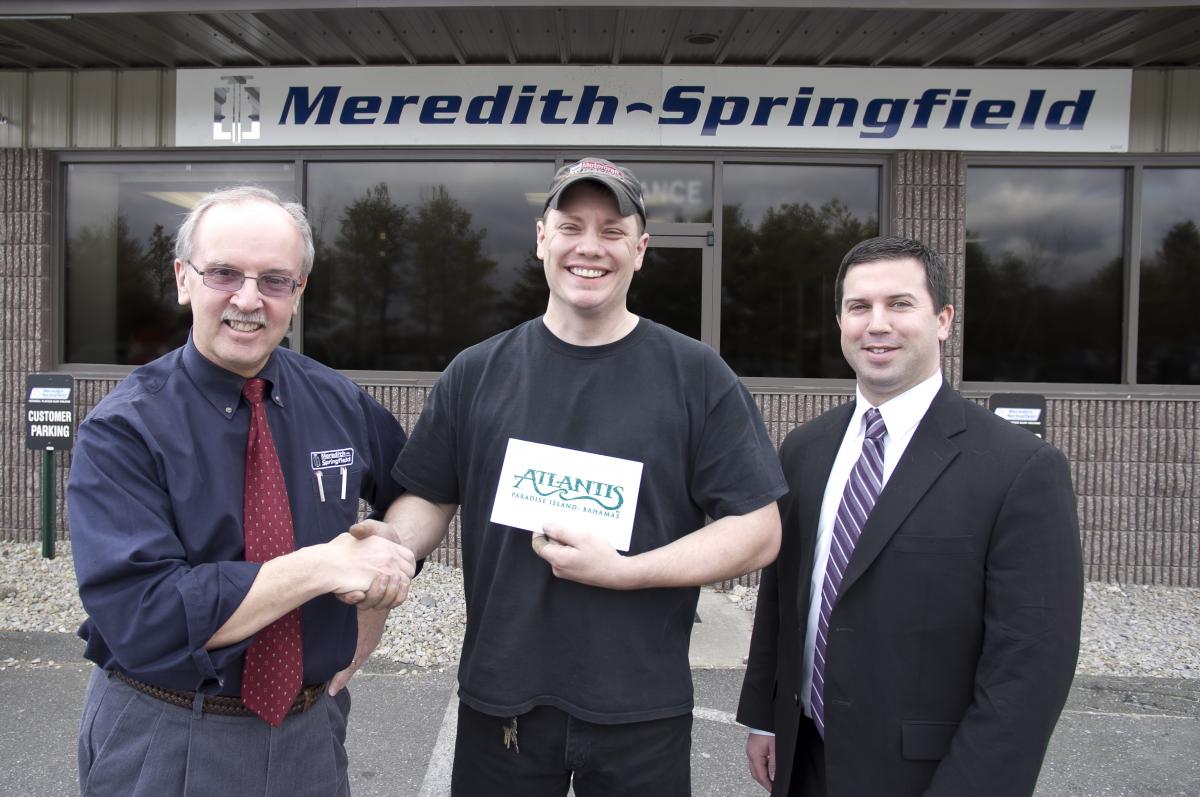 Safety in plastics processing and moldmaking plants is a big concern because there tend to be a lot of accidents - even small ones - that happen in these environments. "Five years ago we didn't have a great safety record, due to the fact that we do a lot of cutting and trimming of plastic forms, where cuts and scrapes can happen," said Mel O'Leary, President of Meredith-Springfield.

O'Leary decided that had to change, and began making investments in specific types of machine guarding and automation, and started a more in-depth safety education program. "The difference in our safety record has been night and day," he stated. "The return on investment for the automation and education has been worth every dime."

While the ROI came to the company in terms of dollars and cents in a 60% savings on the company's workers' compensation insurance, Meredith-Springfield also saw a big boost in employee morale. "There's no question we've saved a huge amount of money compared to where we were five years ago," O'Leary explained in an interview with PlasticsToday. "There's more room to go with even further savings as very old claims drop off our costs continue to go down as we continue to stay safe."

Employee awareness is the biggest part of the success the company has with gaining such a good safety record, and keeping the working environment safe on an ongoing basis, O'Leary notes. "So much as to do with employee awareness and we've found that by keeping the idea of safety in front of our employees through things such as contests, raffles, and our 'Catching People Doing Things Right' program where we take photos of people wearing their safety equipment correctly or putting a machine guard in place or cleaning up a tripping hazard, gives incentives and makes it fun too. We do a lot of things to keep the idea of safety in front of the employees all the time."

Some of the savings that the company realized because of its reduced workers' compensation costs (from a high of nearly $100,000 in 2006 to about $40,000 in 2011) has been put into things for the employees to improve their quality of work life. The company recently installed satellite TV in the employee lounge and lunchroom and added computer stations for them to e-mail during lunch, which O'Leary said has "generally improved employee morale and their quality of work life."

While Scott Hirsh won the big prize, two other employees' names were drawn. John P. Szczygiel of Wilbraham, MA won the second prize of $100, and Jason P. Pennell of South Hadley, MA, won a day off with pay. While all 50 employees were given a chance to win the prizes, many had other opportunities throughout the year to improve their chances in the drawing, such as earning extra entries through attendance records and smaller incentive contests.

"All of these things have been great morale boosters, and a great way to get people interested in the company in general and safety in particular," said O'Leary. "Everyone helped us get to this important goal. We're so proud of them, and everyone is wishing Scott a great time at the Atlantis Resort."